Anti-Müllerian hormone (AMH), also known as Müllerian inhibiting substance (MIS) or factor (MIF). AMH plays crucial roles in sexual differentiation and gonadal functions. AMH is produced by Sertoli and granulosa cells in the male and female, respectively. AMH levels is useful in fertility assessment, as it provides a guide to ovarian reserve and identifies women that may need to consider either egg freezing or trying for a pregnancy sooner rather than later if their long-term future fertility is poor.

In the male, AMH is a specific functional marker of the immature Sertoli cell. AMH expression is initiated at the time of fetal differentiation of the seminiferous cords, by the end of the 7th embryonic week, and remains at high levels until the onset of puberty, when it rapidly declines in response to testosterone synthesis and the onset of germ cell meiosis (Pic. 1). The onset of AMH expression and its basal expression level throughout life are independent of gonadotropins.

Females are born with a fixed number of primordial follicles, resting in a dormant state of meiosis II until puberty, until they enter different stages of development. The quantity and the quality of primordial follicle constitute the reserve of an ovary. AMH levels are almost undetectable at birth. The secretion decreases as antral follicles start to grow, and it stops when a follicle reaches 8 mm or undergoes atresia. Preantral and small antral follicles measuring 2 to 8 mm express highest amount of AMH thus making it the earliest marker of ovarian follicular growth. The circulating levels of AMH in adult women reflect the number of remaining primordial follicles. During childhood and adolescence, AMH fluctuations are minimal and each girl maintains her relative level during pubertal transition. During menstrual cycle it is observed that AMH exhibit mild fluctuation. Mild fluctuation can be explained by the fact that dominant follicles lack AMH production, resulting in slight decline during late follicular stage.

AMH is a good indicator of whether a sufficient number of eggs a female fertility optimal, or whether it has the ability to conceive decreases. Anti-Müllerian hormone level of less than or equal to 5.4 pmol/l (0.8 ng/mL) predicts a low response to ovarian hyperstimulation, while a level greater than or equal to 25.0 pmol/l (3.6 ng/mL) predicts a high response. Follicle stimulating hormone (FSH) and anti-Müllerian hormone (AMH) represent the two most frequently utilized laboratory tests in determining ovarian reserve (OR). A patient's ovarian reserve (OR) determines prognostic chances of fertility treatments and her treatment options. FSH and AMH, in principle, correlate and cross-corollaries can, indeed, be established. A number of studies recently suggested that AMH, better than FSH, reflects in vitro fertilization (IVF) outcomes, including pregnancy chances.

A combination of AMH and a transvaginal ultrasound to count the number of antral follicles is probably the best way to assess ovarian reserve and future fertility. This combination is sometimes referred to as the Biological Body Clock Test. Accurate assessments of ovarian reserve are crucial and allow for appropriate counselling during women's reproductive life spans. AMH test can be done on any day of a woman's cycle.

During childhood, AMH levels are relatively stable in both sexes, boys having approximately 35 times higher levels than girls. Until pubertal onset, AMH is consequently a sensitive and specific marker of Sertoli cell activity.

Determination of the serum AMH concentration is used in various ways in clinical pediatrics to determine the presence of testicular tissue in patients with cryptorchidism, suspected anorchia, or more severe Disorders of Sex Development (DSD).

Levels of AMH, might also become a useful predictive marker of the spermatogenic response to gonadotropic treatment in young patients with hypogonadotropic hypogonadism.

In woman serum of AMH used as a marker of Premature ovarian insufficiency (POI), a marker in polycystic ovarian syndrome (PCOS) or as a tumor load marker.

In PCOS women, anti-Müllerian hormone (AMH) is suspected to play a significant role in causing anovulation due to its inhibitory influence on FSH that normally promotes follicular development from the small antral stage to ovulation. Moreover, plasma AMH levels in PCOS patients are two- to threefold higher than in women with normal ovaries, and the severity of the PCOS phenotype correlates with AMH production, which is higher in anovulatory than in ovulatory PCOS patients.

AMH is exclusively secreted by granulosa cells, it is a reliable marker for diagnosis as well as monitoring for recurrences of tumor. AMH surge is observed up to 16 months prior to clinical recurrence of the tumor itself, suggesting it as a useful marker of granulosa cell activity. 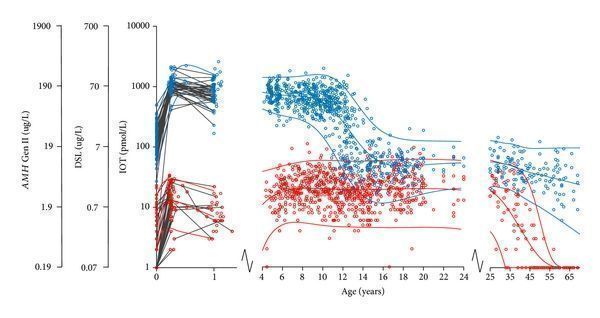 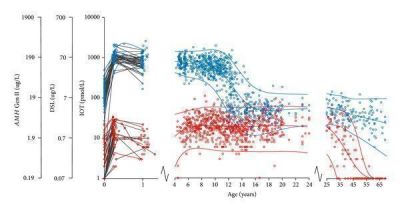 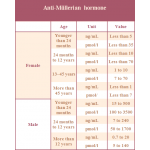