A steroid and estrogen sex hormone produced in the ovaries of females.

Estradiol (Pic. 1) is the primary female sex hormone and derived from cholesterol, via intermediate pregnenolone. It is named for and is important in the regulation of the estrous and menstrual female reproductive cycles. Estradiol is essential for the development and maintenance of female reproductive tissues but it also has important effects in many other tissues including bone. While estrogen levels in men are lower compared to women, estrogens have essential functions in men as well.

Estradiol is produced especially within the follicles of the female ovaries, but also in other endocrine (i. e., hormone - producing) and non-endocrine tissues including:

The development of secondary sex characteristics in women is driven by estrogens, to be specific, estradiol. These changes are initiated at the time of puberty, most are enhanced during the reproductive years, and become less pronounced with declining estradiol support after the menopause. Thus, estradiol produces breast development, and is responsible for changes in the body shape, affecting bones, joints, and fat deposition. Fat structure and skin composition are modified by estradiol.

In the female, estradiol acts as a growth hormone for tissue of the reproductive organs, supporting:

During the menstrual cycle (Pic. 2), estradiol produced by the growing follicle triggers, via a positive feedback system, the hypothalamic-pituitary events that lead to the luteinizing hormone surge, inducing ovulation. In the luteal phase, estradiol, in conjunction with progesterone, prepares the endometrium for implantation. During pregnancy, estradiol increases due to placental production.
Estrogen is also considered to play a significant role in women’s mental health, with links suggested between the hormone level, mood and well-being. Sudden drops or fluctuations in, or long periods of sustained low levels of estrogen may be correlated with significant mood-lowering. Clinical recovery from depression postpartum, perimenopause, and postmenopause was shown to be effective after levels of estrogen were stabilized and/or restored (Pic. 3).

The effect of estradiol (and estrogens in general) upon male reproduction is complex. Estradiol is produced by action of aromatase mainly in the Leydig cells It functions (in vitro) to prevent apoptosis of male sperm cells. Suppression of estradiol production in a subpopulation of subfertile men may improve the semen analysis. Males with certain sex chromosome genetic conditions, such as Klinefelter's syndrome, will have a higher level of estradiol.

Effect in other tissues

If severe side effects of low levels of estradiol in a woman's blood are experienced (commonly at the beginning of menopause or after oophorectomy (ovary removal surgery)), hormone replacement therapy (HRT) may be prescribed. Such therapy is usually combined with a progestin to reduce the risk of endometrial cancer.

Estrogen therapy is also used as part of the hormone replacement therapy for trans women. Either oral or transdermal estradiol is used in higher concentrations during initial treatment and transition; estradiol is continued in lower doses to maintain female-level hormones following sex reassignment surgery.

Estradiol is also used as an agent of stimulating female puberty induction, as in the treatment of delayed puberty caused by hypogonadism or Turner's syndrome. In women, serum estradiol is measured in a clinical laboratory and reflects primarily the activity of the ovaries. As such, they are useful in the detection of baseline estrogen in women with amenorrhea or menstrual dysfunction, and to detect the state of hypoestrogenicity and menopause. Furthermore, estrogen monitoring during fertility therapy assesses follicular growth and is useful in monitoring the treatment. Estrogen-producing tumors will demonstrate persistent high levels of estradiol and other estrogens. In precocious puberty, estradiol levels are inappropriately increased. 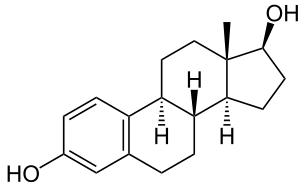 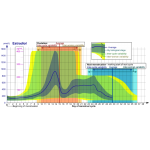 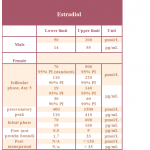