A dominant estrogen during pregnancy, and is secreted mainly by the placenta.

Estriol (E3) is a dominant estrogen during pregnancy, and is secreted mainly by the placenta. E3 tests of placental or feto-placental function are widely used in high-risk pregnancies to predict adverse fetal outcome. It is also used as a part of hormonal replacement therapy.

Estriol can be measured in maternal blood or urine and can be used as a marker of fetal health and wellbeing. DHEA-S is produced by the adrenal cortex of the fetus. This is converted to estriol by the placenta.

If levels of unconjugated estriol (uE3 or free estriol) are abnormally low in a pregnant woman, this may indicate chromosomal or congenital anomalies like Down syndrome or Edward's syndrome. It is included as part of the triple test & quadruple test for antenatal screening for fetal anomalies.

Because many pathological conditions in a pregnant woman can cause deviations in estriol levels, these screenings are often seen as less definitive of fetal-placental health than a nonstress test. Conditions which can create false positives and false negatives in estriol testing for fetal distress include preeclampsia, anemia, and impaired kidney function.

E3 arises mainly as a product of the metabolism of estradiol and estronein the liver. In small quantities it is also synthesized in the ovary by the inner sheath and granular cells of ovarian follicles and the corpus luteum (a temporary endocrine structure involved in ovulation and early pregnancy).

E3 of fetal origin originates exclusively from the 16-hydroxylation of either dehydroepiandrosterone (DHEA) or DHEA sulfate (DHEAS) in the fetal liver, and is metabolized by steroid sulfatase in the placenta. DHEA undergoes aromatization by the aromatase enzyme (CYP19) in the syncytiotrophoblasts of the placenta as blood flows from the conceptus to the mother (Pic. 1). Due to the hemochorial nature of the placenta, more than 90% of estriol enters the maternal circulation.

Estriol urinary excretion in non-pregnant women ranges between 0.02-0.1 mg/24 hrs, while in near-term pregnant women the range is between 50-150 mg/24 hrs . The plasma concentrations of estriol and other estrogens increase as human pregnancy progresses (Pic. 2).

During pregnancy, it is proposed that the hormone regulates uteroplacental blood flow and placental vascularization.

Estriol is available in oral tablet, vaginal cream, and vaginal suppository form, and is used in hormone replacement therapy for menopausal symptoms. Estriol is also available in some countries as estriol succinate, a dosage-equivalent ester of estriol. 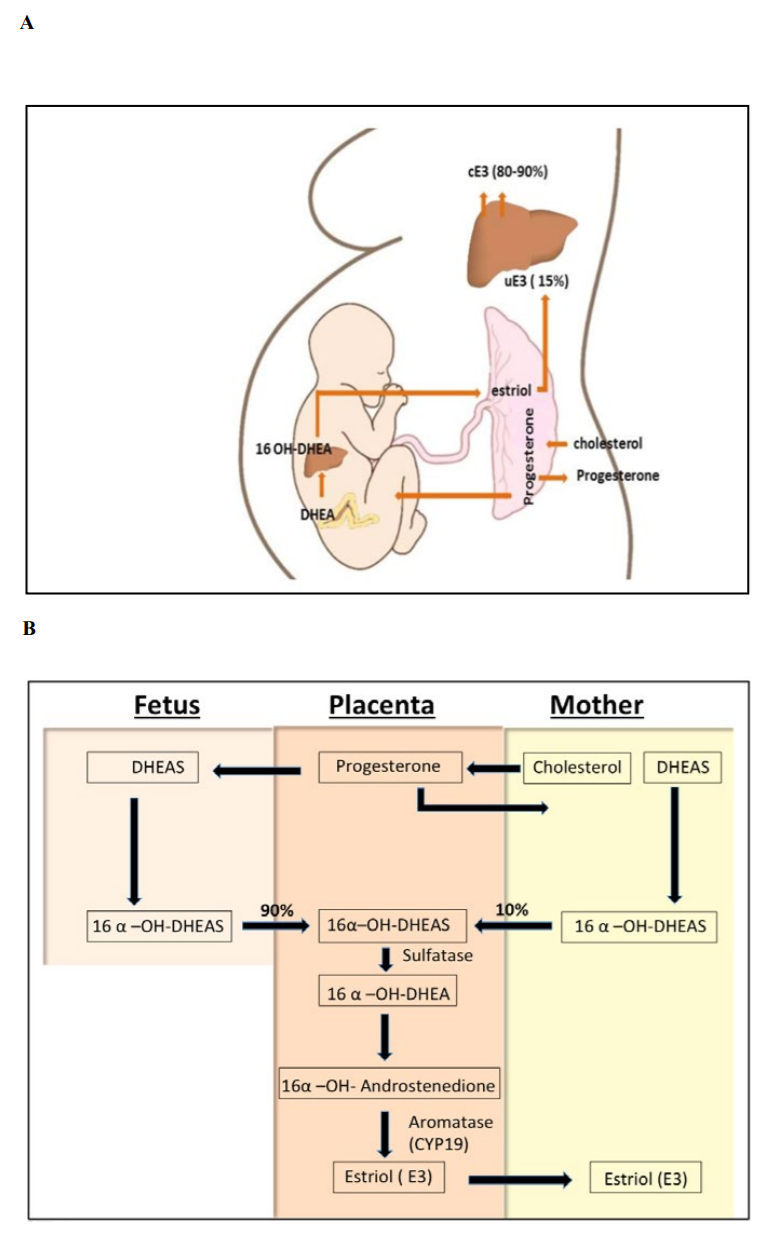 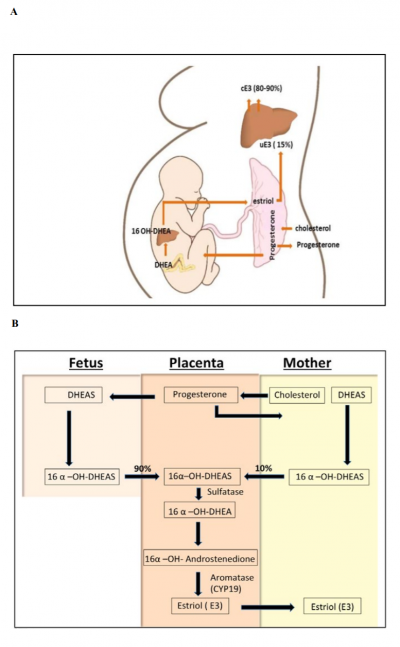 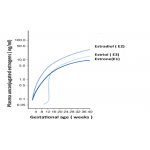 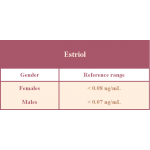