Follicle-stimulating hormone (FSH) (Pic.1) is a gonadotropin, a glycoprotein polypeptide hormone. FSH is synthesized and secreted by the gonadotropic cells of the anterior pituitary gland, and regulates the development, growth, pubertal maturation, and reproductive processes of the body. FSH and luteinizing hormone (LH) work together in the reproductive system.

FSH stimulates the growth and recruitment of immature ovarian follicles in the ovary. In early (small) antral follicles, FSH is the major survival factor that rescues the small antral follicles (2–5 mm in diameter for humans) from apoptosis (programmed death of the somatic cells of the follicle and oocyte). In the luteal-follicle phase transition period the serum levels of progesterone and estrogen (primarily estradiol) decrease and no longer suppress the release of FSH, consequently FSH peaks at about day three (day one is the first day of menstrual flow) (Pic. 2). The cohort of small antral follicles is normally sufficiently in number to produce enough Inhibin B to lower FSH serum levels. (As a woman nears perimenopause, the number of small antral follicles recruited in each cycle diminishes and consequently insufficient Inhibin B is produced to fully lower FSH and the serum level of FSH begins to rise. Eventually the FSH level becomes so high that downregulation of FSH receptors occurs and by postmenopause any remaining small secondary follicles no longer have FSH nor LH receptors).

In addition, there is evidence that gonadotrophin surge-attenuating factor produced by small follicles during the first half of the follicle phase also exerts a negative feedback on pulsatile luteinizing hormone (LH) secretion amplitude, thus allowing a more favorable environment for follicle growth and preventing premature luteinization.

When the follicle matures and reaches 8–10 mm in diameter it starts to secrete significant amounts of estradiol. Normally in humans only one follicle becomes dominant and survives to grow to 18–30 mm in size and ovulate, the remaining follicles in the cohort undergo atresia. The sharp increase in estradiol production by the dominant follicle (possibly along with a decrease in gonadotrophin surge-attenuating factor) cause a positive effect on the hypothalamus and pituitary and rapid GnRH pulses occur and an LH surge results. The increase in serum estradiol levels cause a decrease in FSH production by inhibiting GnRH production in the hypothalamus.

The decrease in serum FSH level causes the smaller follicles in the current cohort to undergo atresia as they lack sufficient sensitivity to FSH to survive. Occasionally two follicles reach the 10 mm stage at the same time by chance and as both are equally sensitive to FSH both survive and grow in the low FSH environment and thus two ovulations can occur in one cycle possibly leading to non-identical (dizygotic) twins.

Follicle stimulating hormone is typically measured in the early follicular phase of the menstrual cycle, usually day three to five, counted from last menstruation. At this time, the levels of estradiol (E2) and progesterone are at the lowest point of the menstrual cycle. FSH levels in this time is often called basal FSH levels, to distinguish from the increased levels when approaching ovulation. FSH levels are normally low during childhood and, in females, high after menopause (Pic. 3).

The most common reason for high serum FSH concentration is in a female who is undergoing or has recently undergone menopause. High levels of Follicle-Stimulating Hormone indicate that the normal restricting feedback from the gonad is absent, leading to an unrestricted pituitary FSH production.

Diminished secretion of FSH can result in failure of gonadal function (hypogonadism). This condition is typically manifested in males as failure in production of normal numbers of sperm. In females, cessation of reproductive cycles is commonly observed. Conditions with very low FSH secretions are:

Use for infertility therapy

FSH is used commonly in infertility therapy, mainly for ovarian hyperstimulation as part of IVF. In some cases, it is used for reversal of anovulation as well.
FSH is available mixed with LH activity in various menotropins including more purified forms of urinary gonadotropins such as Menopur, as well as without LH activity as recombinant FSH (Gonapure, Gonal F, Follistim, Follitropin alpha). 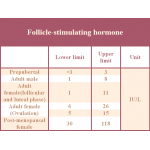