The primary function of insulin is to facilitate the uptake of glucose (a sugar) into body cells. Red blood cells, as well as cells of the brain, liver, kidneys, and the lining of the small intestine, do not have insulin receptors on their cell membranes and do not require insulin for glucose uptake. Although all other body cells do require insulin if they are to take glucose from the bloodstream, skeletal muscle cells and adipose cells are the primary targets of insulin.

High blood glucose levels cause the release of insulin from the pancreas, which increases glucose uptake by cells and liver storage of glucose as glycogen (a stored form of glucose) and glucose production (and excretion into the blood) by the liver is strongly inhibited by high concentrations of insulin in the blood. Circulating insulin also affects the synthesis of proteins in a wide variety of tissues.

In high concentrations in the blood it is therefore an anabolic hormone (a chemical that encourages cellular growth). Low insulin levels in the blood have the opposite effect by promoting widespread catabolism.

The secretion of insulin is regulated through a negative feedback mechanism (a series of reactions or processes that mitigate a change or disturbance within a system, Pic. 1). As blood glucose levels decrease, further insulin release is inhibited (Pic. 2). Beta cells in the islets of Langerhans (the insulin-producing tissue) release insulin in two phases. The first-phase release is rapidly triggered in response to increased blood glucose levels, and lasts about 10 minutes (Pic. 3). The second phase is a sustained, slow release of newly formed vesicles triggered independently of sugar, peaking in 2 to 3 hours. Reduced first-phase insulin release may be the earliest detectable beta cell defect predicting onset of type 2 diabetes. First-phase release and insulin sensitivity are independent predictors of diabetes.

Glucagon is a peptide hormone that works in conjunction with insulin to maintain a stable blood glucose level. Insulin increases the liver’s storage of glucose as glycogen, decreasing blood glucose, whereas glucagon stimulates the breakdown of glycogen stores, increasing blood glucose. The objective of glucagon is to increase the amount of glucose in the blood for use by cells of the body. When there is a lack of glucose in the blood, the pancreas are stimulated to create and release glucagon into the bloodstream. Once glucagon has been released, it travels through the bloodstream until it reaches the liver where it binds to specific glucagon binding sites.

Dysfunction of insulin production and secretion, as well as the target cells’ responsiveness to insulin, can lead to a condition called diabetes mellitus.

There are two main forms of diabetes mellitus. Type 1 diabetes is an autoimmune disease affecting the beta cells of the pancreas. The pancreas of people with type 1 diabetes do not produce insulin; thus, synthetic insulin must be administered by injection or infusion. This form of diabetes accounts for less than 5% of all diabetes cases.

Type 2 diabetes accounts for approximately 95% of all cases. It is acquired, and lifestyle factors such as poor diet, inactivity, and the presence of pre-diabetes greatly increase a person’s risk. In type 2 diabetes, cells become resistant to the effects of insulin. In response, the pancreas increases its insulin secretion, but over time, the beta cells become exhausted. In many cases, type 2 diabetes can be reversed by moderate weight loss, regular physical activity, and consumption of a healthy diet; however, if blood glucose levels cannot be controlled, the diabetic will eventually require insulin.

Metabolis syndrome is characterized by abdominal (central) obesity, elevated blood pressure, elevated blood sugar level (hyperglycemia), elevated blood triglycerids (fatty molecules) and low high-density lipoprotein levels. The condition is thought to be caused by an underlying disorder of energy utilization and storage. The basic underlying cause may be the insulin resistance that precedes type 2 diabetes, which is a diminished capacity for insulin response in some tissues (e.g., muscle, fat).

Polycystic ovary syndrome represents a common endocrinopathy, with anovulation and hyperandrogenism (hight male sex hormone levels) as cardinal symptoms. Insulin resistance is a common finding in PCOS patients, with an important role in its pathogenesis and results in compensatory hyperinsulinemia (a condition in which there are excess levels of insulin circulating in the blood relative to the level of glucose). Thus, PCOS patients are in increased risk of type 2 diabetes mellitus, metabolic syndrome and cardiovascular disease. Nowadays it is believed that insulin resistance is the cause for this increased risk.

Patients with type 1 diabetes depend on external insulin (most commonly injected subcutaneously) for their survival because the hormone is no longer produced internally. 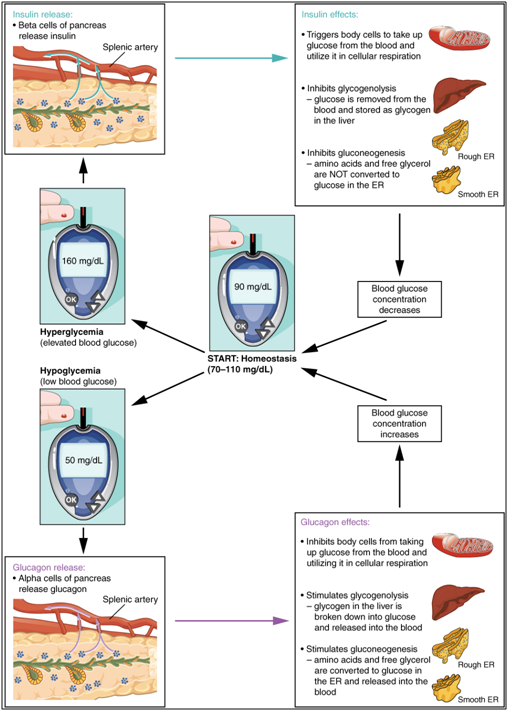 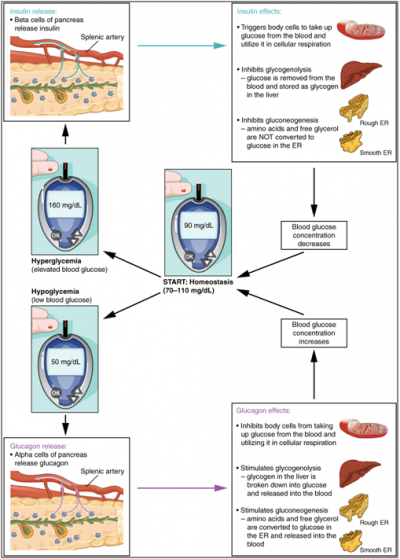 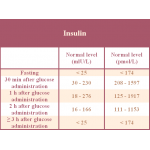 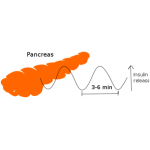