A hormone that stimulates contractions during labor, and then the production of milk.

The functions of OXT cover a variety of social and nonsocial activity/behaviors. Oxytocin is normally produced by the paraventricular nucleus of the hypothalamus and released by the posterior pituitary. Levels of oxytocine (Pic. 1) play a role in social bonding, sexual reproduction in both sexes, and during and after childbirth.

OXT is involved in cognition, tolerance, adaptation and complex sexual and maternal behaviour, as well as in the regulation of cardiovascular functions.

Oxytocin mediates human paternal care as well as maternal care. Plasma and salivary OXT has been associated with paternal social engagement, affect synchrony, and positive communication sequences, and fathers who exhibit high levels of stimulatory contact with 4-6 month old infants have elevated OXT levels compared to fathers that do not exhibit high levels of contact.

Oxytocin is released into the bloodstream as a hormone in response to stretching of the cervix and uterus during labor and with stimulation of the nipples from breastfeeding. This helps with birth, bonding with the baby, and milk production.

OXT levels in females rise also can during massage, genital stimulation, copulation, and orgasm which parallels the association between OXT and physical contact in men.

Important for cervical dilation before birth, oxytocin causes contractions during the second and third stages of labor. The contractions cause the cervix to widen and begin to open. As labor progresses, the amniotic sac can rupture, causing a slow or a fast gush of fluids. Labor usually begins within a 24 hour period after the amniotic sac has ruptured. As contractions become closer and stronger, the cervix will gradually start to dilate.

In lactating (breastfeeding) mothers, oxytocin acts at the mammary glands, causing milk to be 'let down' into subareolar sinuses, from where it can be excreted via the nipple. Oxytocin release during breastfeeding causes mild but often painful contractions during the first few weeks of lactation.

OXT is also an important mediator of maternal-infant bonding in humans. Maternal behaviors such as gazing at the infant, touching, and attachment related thoughts are associated with OXT levels in both early pregnancy and postpartum periods. Mothers who display high levels of affectionate contact exhibit an increase in plasma and salivary OXT, while similar increases are not exhibited by mothers displaying low levels of contact. The primary importance of OXT in human maternal behavior appears to be in enhancing bonding during the first few weeks of lactation.

Although plasma oxytocin is difficult to measure and has a high degree of variability, reduced plasma OXT has been documented in both males and females suffering from depression. OXT may be specifically involved in the development of postpartum mood disorders. Women with lower plasma OXT while interacting with their own infants are at an increased risk for depression due to low attachment ratings as adults and low attachment ratings for their children.

Oxytocin is also thought to modulate inflammation by decreasing certain cytokines (a broad category of small proteins that are important in cell signaling). Thus, the increased release in oxytocin following positive social interactions has the potential to improve wound healing.

This can you see in Pic. 2. For example, in childbirth, when the head of the fetus pushes up against the cervix (1) it stimulates a nerve impulse from the cervix to the brain (2). When the brain is notified, it signals the pituitary gland to release a hormone (3). Oxytocin is then carried via the bloodstream to the uterus (4) causing contractions, pushing the fetus towards the cervix eventually inducing childbirth.

An intravenous infusion of oxytocin is used to induce labor and to support labor in case of slow childbirth. Oxytocin is relatively safe when used at recommended doses, and side effects are uncommon. Excessive dosage or long-term administration (over a period of 24 hours or longer) have been known to result in tetanic uterine contractions, uterine rupture, postpartum hemorrhage, and water intoxication, sometimes fatal. 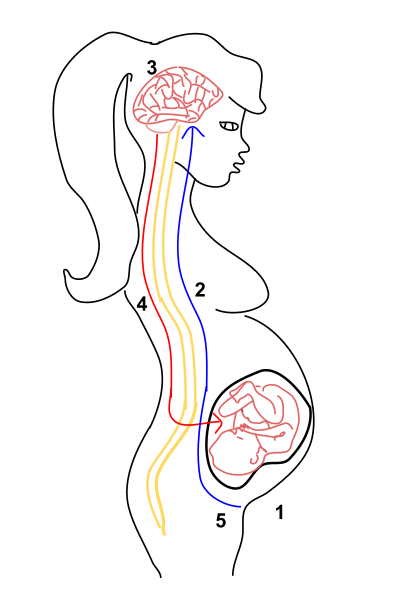 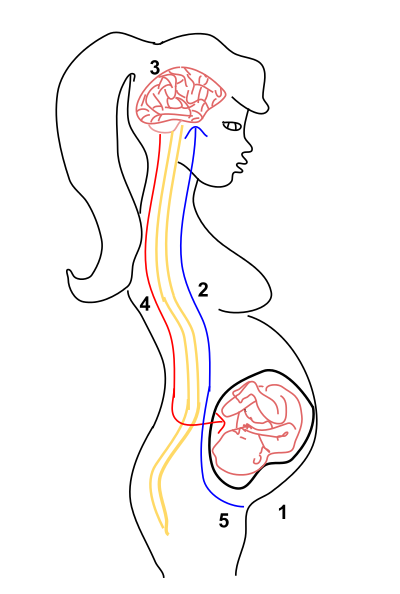