Testosterone (Pic.1) is a steroid hormone from the androgen group. Androgen is any natural or synthetic compound, usually a steroid hormone, that stimulates or controls the development and maintenance of male characteristics in humans by binding to androgen receptors. This includes the activity of the primary male sex organs and development of male secondary sex characteristics. Androgens are also the original anabolic steroids and the precursor of all estrogens. In general, androgens promote protein synthesis and growth of those tissues with androgen receptors.

Testosterone is produced primarily by the testes in men, although it also can be produced by the adrenal glands and other sites including adipose tissue and bone. It is responsible for testes descent and reproductive tract development in the fetus, development of male secondary sex characteristics in puberty, and the production of sperm. Testosterone production in men begins in utero, rises sharply in puberty, and then declines with age (Pic. 2). Indeed, the Massachusetts Male Aging Study showed that total serum testosterone levels decline by 1.6% per year starting at age 40. Testosterone is also produced by the ovaries, the adrenal glands, and tissues such as adipose tissue and skin in women, although serum concentrations are almost 20-fold lower in pre-menopausal women compared to age-matched men. Interestingly, testosterone levels also decline with age in women. This age-dependent reduction in testosterone is not restricted to humans, as it is also seen in older male rats and mice (>20 months of age) in conjunction with a decline in fertility, although whether levels decline in aged female animals has not been investigated.

The prenatal androgen effects occur during two different stages. Between 4 and 6 weeks of the gestation.

In the first weeks of life for male infants, testosterone levels rise. The levels remain in a pubertal range for a few months, but usually reach the barely detectable levels of childhood by 4–6 months of age. The function of this rise in humans is unknown. It has been speculated that "brain masculinization" is occurring since no significant changes have been identified in other parts of the body.The male brain is masculinized by the aromatization of testosterone into estrogen, which crosses the blood–brain barrier and enters the male brain, whereas female fetuses have alpha-fetoprotein, which binds the estrogen so that female brains are not affected.

The first observable effects of rising androgen levels at the end of childhood, occurring in both boys and girls:

Begin to occur when androgen has been higher than normal adult female levels for months or years. In males, these are usual late pubertal effects, and occur in women after prolonged periods of heightened levels of free testosterone in the blood.

Men's levels of testosterone changes depending on whether they are exposed to an ovulating or nonovulating woman's body odour. Men who are exposed to scents of ovulating women maintained a stable testosterone level that was higher than the testosterone level of men exposed to nonovulation cues. Testosterone levels and sexual arousal in men are heavily aware of hormone cycles in females. This may be linked to the ovulatory shift hypothesis, where males are adapted to respond to the ovulation cycles of females by sensing when they are most fertile and whereby females look for preferred male mates when they are the most fertile; both actions may be driven by hormones.

Androgens may modulate the physiology of vaginal tissue and contribute to female genital sexual arousal. Women's level of testosterone is higher when measured pre-intercourse vs pre-cuddling, as well as post-intercourse vs post-cuddling. There is a time lag effect when testosterone is administered, on genital arousal in women. In addition, a continuous increase in vaginal sexual arousal may result in higher genital sensations and sexual appetitive behaviors.

When females have a higher baseline level of testosterone, they have higher increases in sexual arousal levels but smaller increases in testosterone, indicating a ceiling effect on testosterone levels in females. Sexual thoughts also change the level of testosterone but not level of cortisol in the female body, and hormonal contraceptives may have an impact on the variation in testosterone response to sexual thoughts.
Testosterone may prove to be an effective treatment in female sexual arousal disorders. Currently there is no FDA approved androgen preparation for the treatment of androgen insufficiency, however it has been used off-label to treat low libido and sexual dysfunction in older women. Testosterone may be a treatment for postmenopausal women as long as they are effectively estrogenized.

Regulator of cognitive and physical energy

Testosterone regulates the population of thromboxane A2 receptors on megakaryocytes and platelets and hence platelet aggregation in humans.High androgen levels are associated with menstrual cycle irregularities in both clinical populations and healthy women.

As testosterone affects the entire body (often by enlarging; males have bigger hearts, lungs, liver, etc.), the brain is also affected by this sexual differentiation. The literature suggests that attention, memory, and spatial ability are key cognitive functions affected by testosterone in humans. Preliminary evidence suggests that low testosterone levels may be a risk factor for cognitive decline and possibly for dementia of the Alzheimer's type.
Testosterone does not cause deleterious effects in prostate cancer. In people who have undergone testosterone deprivation therapy, testosterone increases beyond the castrate level have been shown to increase the rate of spread of an existing prostate cancer

However, this is controversial and is the subject of ongoing clinical trials, assessing the benefits and harms of its use in otherwise healthy older men. As men enter middle age they may notice changes caused by a relative decline in testosterone: fewer erections, fatigue, thinning skin, declining muscle mass and strength, more body fat. This dissatisfaction with the changes of aging has led to the development of the idea of androgen replacement therapy. Androgen replacement therapy is also used for men who have lost testicular function to disease, cancer, or other causes. For men who have had prostate cancer or at elevated risk, androgen replacement therapy remains controversial because some studies have shown that it increases the risk for prostate cancer; others refute that risk.

Non-medical use
Testosterone can be used by an athlete in order to improve performance, but it is considered to be a form of doping in most sports. There are several application methods for testosterone, including intramuscular injections, transdermal gels and patches, and implantable pellets. Hormone supplements cause the endocrine system to adjust its production and lower the natural production of the hormone, so when supplements are discontinued, natural hormone production is lower than it was originally.
Anabolic steroids (including testosterone) have also been taken to enhance muscle development, strength, or endurance. They do so directly by increasing the muscles' protein synthesis. As a result, muscle fibers become larger and repair faster than the average person's.
Images 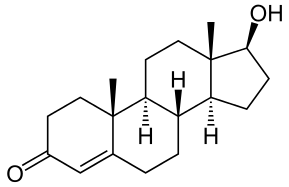 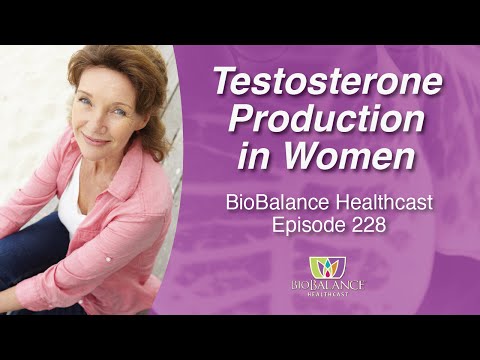 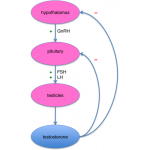 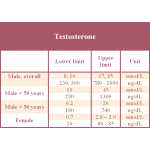