Tyrosine-based hormones produced by thyroid gland and that regulate metabolism, heat production, protein synthesis, and many other body functions.

Thyroid hormones are hormones that are produced by the thyroid gland. These hormones include thyroxine (T4), triiodothyronine (T3) and calcitonin. Thyroid hormones regulate metabolism, heat production, protein synthesis, and many other body functions, thyroid disorders can have severe and widespread consequences. Calcitonin does not affect the metabolic turnover, but interferes with the metabolism of calcium (and phosphate) ions, which are responsible (among other functions) for the stability of membrane potential.

The major form of thyroid hormone in the blood is T4, which has a longer half-life than T3. T4 is converted to the active T3 (three to four times more potent than T4) within cells by enzymes called deiodinases. In humans, the ratio of T4 to T3 released into the blood is between 14:1 and 20:1.

T4 and T3 are tyrosine-based hormones that are primarily responsible for regulation of metabolism. They boost basal metabolic rate of proteins, fats and carbohydrates as well as vitamins. Thyroid hormones also affect the dilation of blood vessels, which in turn affects the rate at which heat can escape the body. The more dilated blood vessels are, the faster heat can escape. One suffering from hyperthyroidism (an overactive thyroid) will experience a fever; conversely, one suffering from hypothyroidism (a less active thyroid) will suffer from a decrease in body temperature.

When levels of T4 (Pic. 1; Pic. 2) and T3 (Pic. 3; Pic. 4) hormones are excessive, this effect accelerates the heart rate, strengthens the heartbeat, and increases blood pressure. Adequate levels of thyroid hormones are also required for protein synthesis and for fetal and childhood tissue development and growth. Thyroid hormones play a particularly crucial role in brain maturation during fetal development. They are especially critical for normal development of the nervous system both in utero and in early childhood, and they continue to support neurological function in adults. Cells of the developing brain are a major target for T3 and T4.

The thyroid gland also secretes a hormone called calcitonin (Pic. 5) that is produced by the parafollicular cells (also called C cells) that stud the tissue between distinct follicles. It appears to have a function in decreasing blood calcium concentrations by:

Thyroid hormones have also a complex interrelationship with reproductive hormones, and deficiencies can influence libido, fertility, and other aspects of reproductive function.

T3 and T4 are partially composed of iodine. T4 is produced by attaching iodine atoms to the ring structures of tyrosine molecules and contains four iodine atoms. T3 is identical to T4, but it has one less iodine atom per molecule.

In the bloodstream, less than 1% of the circulating T3 and T4 remains unbound. This free T3 and T4 can cross the lipid bilayer of cell membranes and be taken up by cells. The remaining 99% of circulating T3 and T4 is bound to specialized transport proteins called thyroxine-binding globulins (TBGs), to albumin, or to other plasma proteins. This “packaging” prevents their free diffusion into body cells. When blood levels of T3 and T4 begin to decline, bound T3 and T4 are released from these plasma proteins and readily cross the membrane of target cells. T3 is more potent than T4, and many cells convert T4 to T3 through the removal of an iodine atom.

Calcitonin is synthetized from a prohormone (precursor of a hormone) which is the product of the CALC1 (CALCA) gene. By an alternative splicing of that gene another peptide is formed – termed CGRP (calcitonin gene related peptide).

Hyperthyroidism may cause low sperm count in men or irregular menstruation in women.

Calcitonin was found in human seminal plasma at concentracions higher than in blood plasma. It is important for stimulating of capacitation and fertilizing ability in uncapatitated sperm. On the other hand, salmon calcitonin used for osteoporosis treatment has negative impact on human sperm motility. Calcitonin level is increased during pregnancy and lactation because of the demand for transfer of maternal calcium to the fetus/infant. 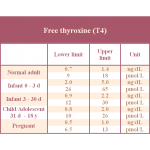 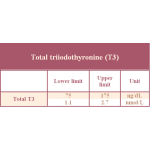 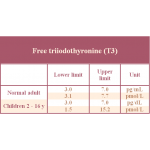 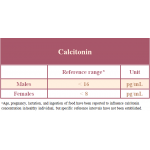 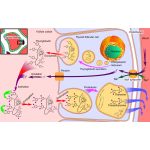 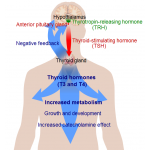