TSH stimulates the thyroid gland to secrete the hormone thyroxine (T4), which has only a slight effect on metabolism. T4 is converted to triiodothyronine (T3), which is the active hormone that stimulates metabolism. About 80% of this conversion is in the liver and other organs, and 20% in the thyroid itself (Pic. 1).

The concentration of thyroid hormones (T3 and T4) in the blood regulates the pituitary release of TSH; when T3 and T4 concentrations are low, the production of TSH is increased, and, conversely, when T3 and T4 concentrations are high, TSH production is decreased.This is an example of a negative feedback look (a regulatory mechanism in which a 'stimulus' causes an opposite 'output' in order to maintain an ideal level of whatever is being regulated) (Pic. 2).

The TSH production itself is modulated by thyrotropin-releasing hormone (TRH), which is produced by the hypothalamus and secreted at an increased rate in situations, such as cold exposure (to stimulate thermogenesis).

TSH is secreted throughout life but particularly reaches high levels during the periods of rapid growth and development. The adult reference range is 0.35 – 5.5 mU/L (Pic. 3).

Initiation of production in fetuses

The condition that occurs due to excessive production of thyroid hormone by the thyroid gland is called hyperthyroidism. Signs and symptoms vary between people and may include irritability, muscle weakness, sleeping problems, a fast heartbeat, poor tolerance of heat, diarrhea, enlargement of the thyroid, and weight loss.

Stimulating antibodies to the TSH receptor mimic TSH and cause Graves' dinase (an autoimmune disease that affects the toroid). The thyroid-stimulating hormone (TSH, or thyrotropin) receptor (TSHR) mediates the activating action of TSH to the thyroid gland, resulting in the growth and proliferation of thyrocytes and thyroid hormone production. In Graves' disease, thyroid-stimulating autoantibodies can mimic TSH action and stimulate thyroid cells. This leads to hyperthyroidism and abnormal overproduction of thyroid hormone.

Human chorionic gonadotropin (hCG) shows some cross-reactivity to the TSH receptor and therefore can stimulate production of thyroid hormones. In pregnancy, prolonged high concentrations of hCG can produce a transient condition termed gestational hyperthyroidism (a transient, mild hyperthyroidism) that occurs early in pregnancy and is not due to intrinsic thyroid disease). This is also the mechanism of trophoblastic tumors increasing the production of thyroid hormones.

The quantitative ultrasensitive immunometric TSH determination in serum is the most useful test to detect hypothyroidism and hyperthyroidism. Additionally, serum TSH is a very useful test in distinguishing primary (thyroidal) and secondary (pituitary) hypothyroidism.

A TRH (thyrotropin-releasing hormone) TSH stimulating test is useful for determining pituitary function since administration of TRH will normally increase plasma levels of TSH within 30 minutes after administration, whereas no increase in plasma TSH is observed in pituitary hypothyroidism. A flat response to TRH is observed in hyperthyroidism and presumed subclinical hyperthyroidism (also seen in pituitary TSH deficiency). Tertiary (hypothalamic) hypothyroidism results from deficient hypothalamic synthesis of TRH. Since there is no available reliable assay for serum TRH, hypothalamic malfunction can be inferred from a TRH stimulation test. (Pic. 4.). 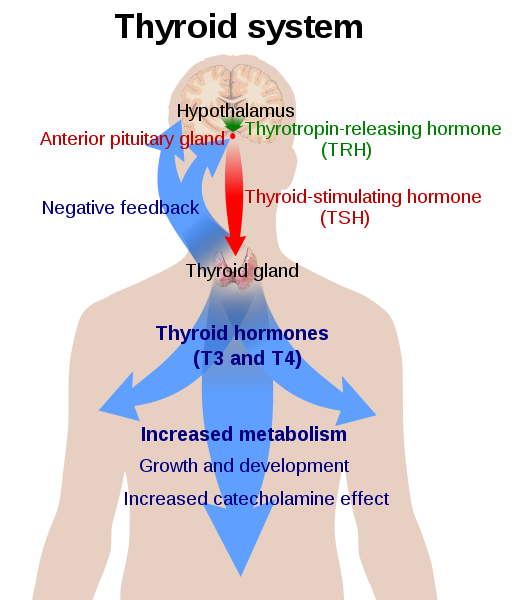 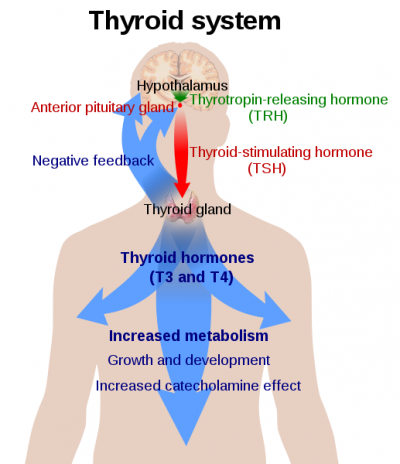 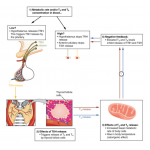 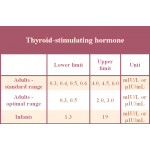 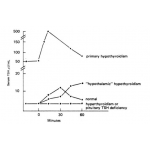