A releasing hormone produced by the hypothalamus that stimulates the release of thyrotropin (TSH) and prolactin from the anterior pituitary.

TRH stimulates TSH after it is released from the hypothalamic nerve in the median eminence. Beyond neuronal tissue, expression of TRH was also found in the pancreatic islets where it identifies to the Langerhans-insulin-producing beta cells. TRH can also be detected in other areas of the body including the gastrointestinal system as well as in the brain.

Either elevated or decreased levels of TRH affect fertility through its effect on TSH and prolactin. In low TRH level, the pituitary doesn´t produce enough TSH and following release of thyroid hormones is insufficient. The condition is referred as hypothyroidism. In men with hypothyroidism, increased testicular size is observed along with a significant drop in mature germ cells within the seminiferous tubules. In women, no ovulation occurs due to low levels of luteinizing hormone (LH) and follicle-stimulating hormone (FSH).

In elevated TRH level, production of prolactin hormone is abnormally over stimulated. The condition is referred as hyperprolactinemia. In women, a high blood level of prolactin often causes hypoestrogenism (low level of estrogen) with irregular or absent menstrual periods. In men, the most common symptoms of hyperprolactinaemia are decreased libido, sexual dysfunction (in both men and women), erectile dysfunction, infertility, and gynecomastia.

Both of these conditions have to be treated before assisted reproductive technology (ART) treatment, especially for achieving regular menstrual periods with ovulation.

Low blood levels of triiodothyronine (T3) and thyroxine (T4) stimulate the release of thyrotropin-releasing hormone (TRH) from the hypothalamus, which triggers secretion of TSH from the anterior pituitary. In turn, thyroid-stimulating hormone (TSH) stimulates the thyroid gland to secrete T3 and T4. The levels of TRH, TSH, T3, and T4 are regulated by a negative feedback system (Pic. 1) in which increasing levels of T3 and T4 decrease the production and secretion of TSH.

Initiation of production in fetuses

Thyrotropin-releasing hormone (TRH) and thyroid-stimulating hormone (TSH) start being secreted from the fetal hypothalamus and pituitary at 18-20 weeks of gestation, and fetal production of thyroxine (T4) reaches a clinically significant level at thisage. Fetal triiodothyronine (T3) remains low until 30 weeks of gestation, and increases at term. Fetal self-sufficiency of thyroid hormones protects it against, for example, brain developmental abnormalities caused by maternal hypothyroidism (deficiency of thyroid hormones).

TRH is used clinically by intravenous injection to test the response of the anterior pituitary gland; this procedure is known as a TRH test. This is done as diagnostic test of thyroid disorders such as secondary hypothyroidism and in acromegaly (excess growth hormone). 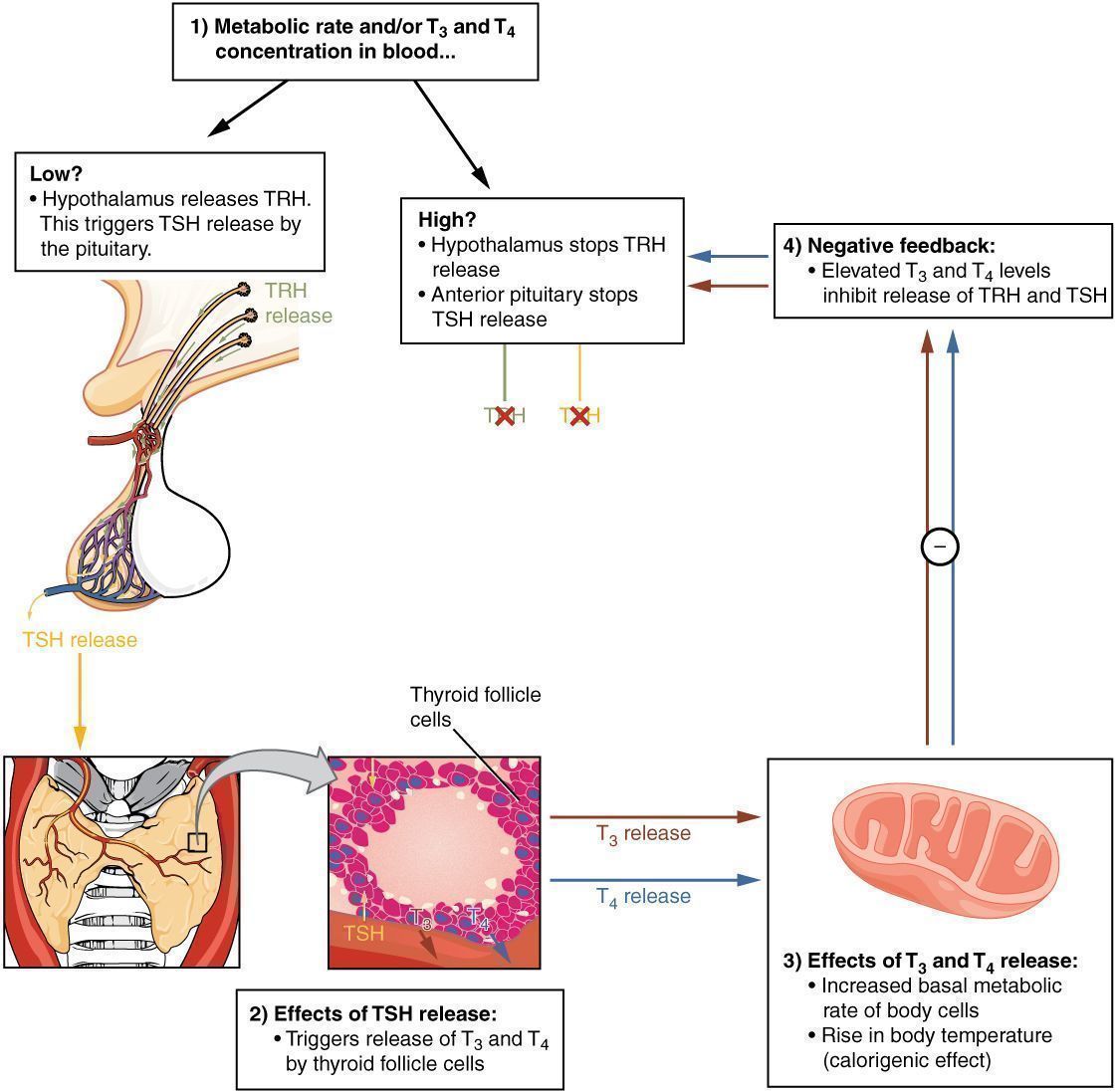 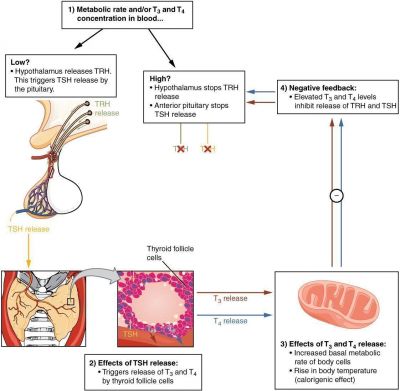