A type of cancerous tumor that develops in the gland cells.

Adenocarcinoma is a type of cancerous tumor that can occur in several parts of the body. It is defined as neoplasia of epithelial tissue that has glandular origin, glandular characteristics, or both. Epithelial tissue sometimes includes, but is not limited to, the surface layer of skin, glands, and a variety of other tissue that lines the cavities and organs of the body. To be classified as adenocarcinoma, the cells do not necessarily need to be part of a gland, as long as they have secretory properties.

Most prevalent types of adenocarcinoma include:

Doctors do not completely understand what causes adenocarcinoma, or any type of cancer. The diagnosis is based on physical exam to see if there is any swelling or a growth in any organ. Also, blood test may show signs of possible cancer.

There are several strategies for treating adenocarcinoma. More than one of these treatment options may be used, depending on individual case and goals.

Infertility due to gonadal failure is one of the major consequences of cancer therapy, particularly in patients who receive aggressive chemotherapy and/or radiotherapy treatment. Many surveys of cancer survivors have found that those patients are at increased risk of emotional distress if they become infertile as a result of their treatment. Evidence suggests that long-term survival after treatment for cancer during childhood is associated with increased risk of impaired quality of life and higher frequency of psychosocial problems often related to infertility issues. Adolescent cancer survivors have increased anxieties about body image and dating, and pediatric cancer survivors are less likely to marry than matched controls. Although cancer survivors can become parents by adoption or gamete donation, most would prefer to have biological parenthood and biologically related children.

Surgery may also affect future fertility if there is removal or damage of the reproductive organs. In male patients, surgery for pelvic cancer such as for prostate, bladder or colon cancer may damage nerves and affect potency or ejaculation. Further on, surgical adjuvant treatment by removing the gonads may be indicated in female and male patients with hormone sensitive tumors.

Cancer surgery may have impact in fertility by removing reproductive organs or damaging structures needed for reproduction. Chemotherapy and radiotherapy have toxic effects on the gonads and may in certain cases induce ovarian and testicular failure, affecting thus all aspects of reproductive health, including pubertal development, impairment of hormone production and sexual function in adults. Effects of cancer biological therapy on gametes and reproductive organs are not yet established.

In endometrioid adenocarcinoma, the cancer cells grow in patterns reminiscent of normal endometrium. Type I endometrial cancers are often low-grade, minimally invasive into the underlying uterine wall (myometrium), estrogen-dependent, and have a good outcome with treatment. Type I carcinomas represent 75–90% of endometrial cancer.

Type II endometrial carcinomas usually occur in older, post-menopausal people, and are not associated with increased exposure to estrogen or a history of endometrial hyperplasia. Type II endometrial cancers are often high-grade, with deep invasion into the underlying uterine wall (myometrium) and carry a poorer prognosis. They are more aggressive than type I, with a greater risk of relapse and/or metastasis.

It is now accepted that male reproductive failure may precede testicular germ cell cancer. The loss of semen following surgery to treat cancer makes ejaculation impossible, so the sperm cannot physically make it out of the body to reach the woman’s egg for fertilization. With radiation therapy, fertility is nearly always impaired. Radiated prostate cells and seminal vesicles tend to produce semen that cannot transport the sperm well.

The diet plays a key role in various stages of cancer development. The process of carcinogenesis may be affected by nutritional factors through mechanisms that promote or inhibit its development. Some vitamins, such as the antioxidant Vitamins A, E, and C, demonstrate these protective effects. The daily ingestion of antioxidants has the potential of not only protecting against cancer, but also cardiovascular disorders and neurological degenerative diseases.

The symptoms depend on the type of cancer, but the general symptoms may include:

Naturally occurring plant components from traditional herbs a significant source of potential therapeutic compounds for cancer treatment. The use of natural products as alternative anticancer therapies tends to increase, especially in developing countries. Agents with the ability to induce apoptosis in cancer cell have the potential to be used for anticancer therapy and may candidate as alternative ovarian cancer therapy. The terpenoid bioactive compound from Papua ant nest is an important traditional medicine with anticancer effects. Papua ant nest plant is a herbaceous plant that is new and has potential as an alternative therapy in treating cancer, especially the Myrmecodia species.

Cancer therapy varies by patient, tumor type, and location. The type of treatment depends on the stage of the disease. First-line treatment is surgical management, followed by chemotherapy then radiotherapy.

In addition to surgery, this has proven useful in a number of different cancer types. Chemotherapy refers to the administration of a toxin that targets rapidly dividing cells and promotes their cell death. It is nonspecific to tumors and it's effect on other rapidly dividing cells, such as those of the hair follicle, give rise to the side-effects associated with chemotherapy.

This is the primary method of treatment for most isolated, solid cancers. It is also typically an important part of making the definitive diagnosis of tumor type and character through biopsies.

The few contraindications to surgery include a desire to preserve fertility (Pic. 1). Women who wish to preserve their fertility and have low-grade stage I cancer can be treated with progestins, with or without concurrent tamoxifen therapy. This therapy can be continued until the cancer does not respond to treatment or until childbearing is done.

Radiation therapy involves the use of ionizing radiation to specifically target a tumor within the body, leading to its death. Radiation is typically used in addition to surgery and/or chemotherapy. For certain types of cancer, such as early head and neck cancer, it may be used alone.

Except for the bone marrow, the most sensitive organs to radiation therapy in the body are the gonads, both the male testis and the female ovary. The extent of damage in the female and male gonads depends on the dose, fractionation schedule and irradiation field.

Infertility induced by cancer interventions may be overcomed by using assisted reproductive technologies (ART), such as treating the patient with intrauterine insemination or performing in vitro fertilization (IVF).

Adult women wishing to preserve fertility may undergo controlled ovulation stimulation with gonadotropins, for retrieval of matured oocytes and egg freezing, or, if the woman wishes, for IVF of the retrieved eggs and freezing of embryos. In general, controlled ovarian stimulation with gonadotropins for IVF may require only two weeks to achieve, as it has been shown that a random-start in the stimulation cycle, independently of cycle day, does not have a negative impact on the number and quality of oocytes retrieved.

Ovarian stimulation with gonadotropins before egg retrieval aims at obtaining more than one oocyte per cycle and it is a key component of the success of IVF. In women with an estrogen-sensitive tumor (such as breast cancer), the elevation of circulating estradiol levels during ovulation stimulation is undesirable and it has been regarded as potentially harmful. Alternative protocols, including natural cycle IVF (without hormone stimulation) or inducing ovulation by using Selective Estrogen Receptor Modulators (SERMs) and aromatase inhibitors alone or in combination with gonadotropins have been proposed, as they might be potentially safer. Natural cycle IVF gives only one oocyte or embryo per cycle and this treatment protocol has a high rate of cycle cancellation.

As many children are born after fertility treatments using frozen-thawed sperm, the cryopreser‐ vation of ejaculated semen is regarded as an established fertility preservation method in adult patients and pubertal boys. Traditionally, sperm banking by cryopreservation of at least three semen samples with an abstinence period of at least 48 hours in between the samples has been recommended for adult males desiring to preserve their fertility. In the situation of ejaculation failure, the search for spermatozoa in a urine sample could be proposed. When failure in obtaining a semen sample in young men and adolescents, a testicular sperm extraction (TESE) can be performed to retrieve spermatozoa. Other methods described to retrieve spermatozoa in adolescents include penile vibratory stimulation and electro ejaculation. 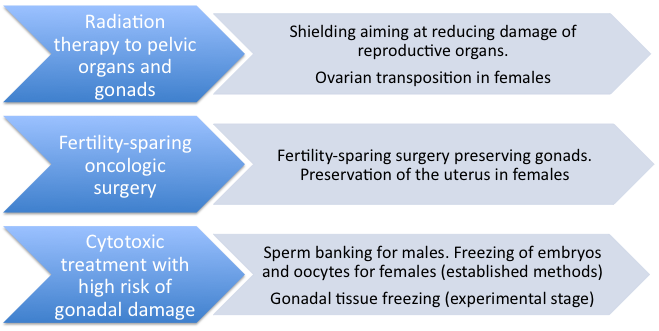 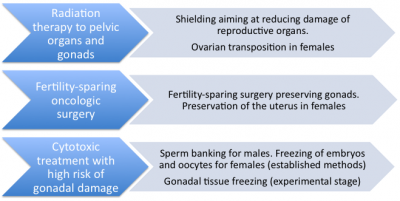