Adenomyosis is a benign condition of the uterus, defined by the presence of endometrial glands and stroma within the myometrium. It is known as a histological diagnosis but it has a clinical dignity showing symptoms (dysmenorrhea, dyspareunia, abnormal uterine bleeding, and infertility) and sharing some pathogenic mechanisms with endometriosis.

Adenomyosis has been defined as the “benign invasion of endometrium into the myometrium, producing a diffusely enlarged uterus which microscopically exhibits ectopic nonneoplastic endometrial glands and stroma surrounded by a hypertrophic (increase in the volume of an organ or tissue due to the enlargement of its component cells) and hyperplastic (increase in the amount of organic tissue that results from cell proliferation) myometrium”. Two separate pathogenetic theories have been advanced to explain its formation: (1) an origin from the invagination of the deepest portion of the endometrial mucosa between bundles of smooth muscle fibres of the myometrium, or along the intramyometrial lymphatic system; (2) a metaplastic process initiating from ectopic intramyometrial endometrial tissue produced de novo.

The condition is typically found in women between the ages of 35 and 50. However, because the endometrial glands can be trapped in the myometrium, it is possible to have increased pain without increased blood (This can be used to distinguish adenomyosis from endometrial hyperplasia; in the latter condition, increased bleeding is more common.).

Adenomyosis may involve the uterus focally, creating an adenomyoma. With diffuse involvement, the uterus becomes bulky and heavier. Adenomyosis is associated with an increased incidence of preterm labour and premature rupture of membranes. Women with adenomyosis are at an increased risk of anemia. This can cause fatigue, dizziness, and moodiness. Adenomyosis has also been linked with anxiety, depression, and irritability.

It is advocated that adenomyosis poses no increased risk for cancer development. However, both entities could coexist and the endometrial tissue within the myometrium could harbor endometrial adenocarcinoma, with potentially deep myometrial invasion. As the condition is estrogen-dependent, menopause presents a natural cure. Patients with adenomyosis often also have leiomyomata and/or endometriosis.

Classically, the diagnosis of adenomyosis has only been possible on a hysterectomy specimen, usually in women in their late fourth and fifth decades,and, therefore, evaluating any relationship with infertility was simply not possible. As a consequence, to this day, no epidemiologic data exists linking adenomyosis to a state of subfertility. Today, new imaging techniques have enabled a noninvasive diagnosis at a much earlier time and a number of single-case or small series reports have appeared showing that medical,surgical, or combined treatment can restore fertility in women with adenomyosis, an indirect proof of an association. At the functional level, several anomalies found in the so-called junctional zone, or inner myometrium, in adenomyosis patients have been shown to be associated with poor reproductive performance, mainly through perturbed uterine peristalsis. Additional evidence for an association comes from experimental data: in baboons, adenomyosis is associated with lifelong primary infertility, as well as to endometriosis. Finally, indirect proof comes from studies of the eutopic and ectopic endometrium in women with adenomyosis proving the existence of an altered endometrial function and receptivity. In conclusion, sufficient indirect proofexists linking adenomyosis to infertility to warrant systematic clinical studies.

Shaoyao-Gancao Decoction (SGD, Shakuyaku-Kanzo-to in Japanese), a well-known traditional Chinese medicine prescription, was sourced from the Chinese Medical Classics text—Shanghan lun in 210 CE. The herbal prescription, which is made up of two herbs (Paeoniae Radix and Glycyrrhizae Radix, “Shaoyao” and “Gancao” in Chinese, resp.), is commonly used in the treatment of gynecological disorders in China, including dysmenorrheal,menorrhagia, and infertility. Clinically, SGD has been used very efficaciously and widely to treat adenomyosis in women in traditional Chinese medical practice, since it has the advantage of noninvasive and less/no side effects.Similar herbal prescription has also been used in Japan and other Oriental countries. In addition, modern pharmacological studies have demonstrated that SGD possesses analgesic and anti-inflammatory effects. Moreover, SGD treatment resulted in a significantly low incidence of adenomyosis in an experimental animal model. However, little is known about the potential mechanisms of the antiadenomyosis effect of SGD.

In those patients who are averse to surgery or those who wish to preserve their reproductive potential, newer, conservative medicaland minor surgical procedures are increasingly being used in the treatment of adenomyosis.

Conservative treatment often consists of anti-inflammatory medications, such as ibuprofen or other NSAIDs (nonsteroidal anti-inflammatory drugs). Hormonal manipulation may include combined or progestin-only oral contraceptives as well as other options such as transdermal patches and progesterone-releasing intrauterine devices. Norethindroneacetate (NA) is the acetic acid ester of norethindrone (a synthetic progestin)and is about twice as potent as norethindrone. NA has been reported to be effective in the treatment of endometriosis.  In lieu of this information and considering the pharmacological profile of NA, it may be presumed to be suitable for the management of adenomyosis. Thus, NA in the medical management of adenomyosis is a novel therapy. However, significant breakthrough bleeding is reported in patients of endometriosis being treated continuously with NA. Due todifferences in symptomotology and gland invasion of the two conditions,breakthrough bleeding may be deemed avoidable in the treatment of adenomyosis.

Long term treatments are medications commonly used as oral contraceptives. Hormonal suppression may be used in the form of danazol or a gonadotropin-releasing hormone agonist. These medications simulate menopause, a period in which adenomyosis often resolves naturally.

Surgical options may include endometrial ablation. Ultrasound (US) -guided percutaneous microwave ablation (PMWA) has been used in the treatment of symptomatic adenomyosis and fibroids. Before ablation, all of the patients underwent examinations, including routine blood and serum gonadal hormone. In addition, uterine volume was recorded. The meanuterine diameter and volume were calculated. Ablation was performed under intravenous conscious sedation. Percutaneous approaches are associated with a risk of bowel puncture; therefore, the intestinal tract must be carefully pushed off from the abdominal wall.

Other options are laparoscopic myometrial electrocoagulation and adenomyoma excision. These have demonstrated positive results in several studies, though long-term data is lacking. A non-surgical procedure, uterine artery embolization may also be used to block the blood supply to the ectopic endometrium, selectively killing the problematic tissue.High frequency ultrasound surgical ablation is also being explored as atreatment for both focal and diffuse forms of adenomyosis over complete hysterectomy. Hysterectomy may bewarranted in some cases where fertility is not desired, and all other treatments have failed.

Adenomyosis usually alters the transit of eggs and sperm and the embryo implantation process, in vitro fertilization enables egg to be fertilized in a laboratory, and then to be insert to uterus. It has greater probabilities of implantation.

Adenomyosis does not have affect on in vitro fertilization and the normal progress of the pregnancy, but in some cases, woman must undergo agonist gonadotropin- releasing hormone treatment. This provokes a temporary condition similar to menopause when ovarian function it stopped and adenomyosis tissue is reduced. 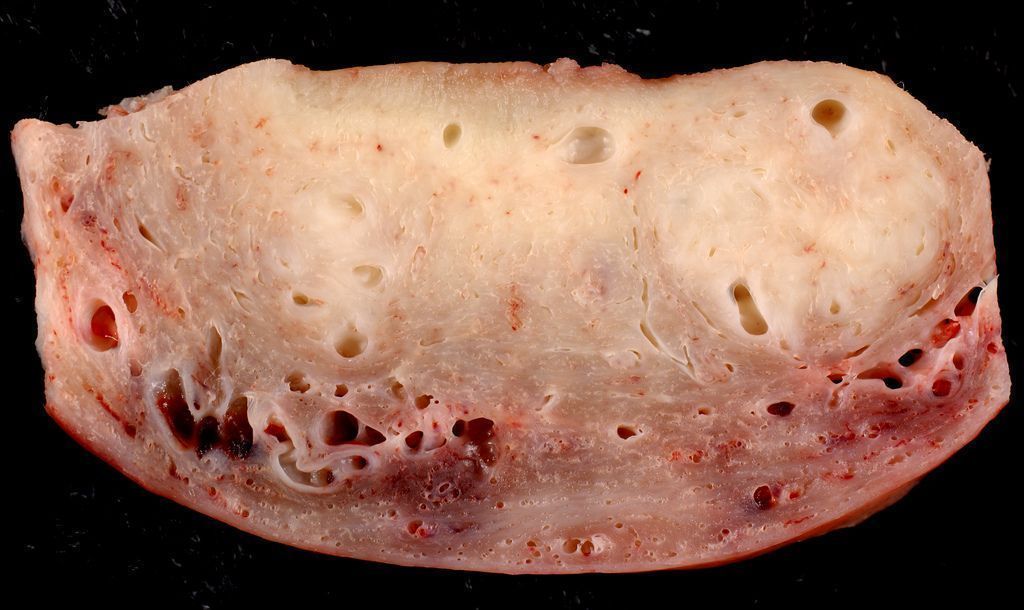 Tube-like uterine glands, which are found in the functional layer of the uterine called endometrium.

Period when the womb is receptive for implantation of the free-lying blastocyst.

A decrease in the amount of red blood cells or hemoglobin in the blood.

Disorder characterized by symptoms of both anxiety and depression that may cause sexual disorders and anovulation.

An abnormal variation in length of menstrual cycles.

The number of live births plus stillbirths with gestational age of ≥20 weeks.

The presence of leiomyomas, the most common benign smooth muscle tumors, in the uterine wall.

A decrease in number of red blood cells or less than the normal quantity of hemoglobin in the blood resulting in low oxygen levels in body tissues.

The emotional state characterized by unpleasant feelings such as uneasiness, worry, apprehension and dread.

A subjective feeling of tiredness which is distinct from weakness, which has a gradual onset.

A cognitive effect which results in one experiencing heightened feelings of annoyance, stress, irritability and a tendency towards violent behaviour.

An outpatient medical procedure that is used to remove or destroy the endometrial lining of the uterus in women.

A laparoscopic surgery which is done as a procedure to treat adenomyosis.

A synthetic progestin which has been reported to be effective in the treatment of gynecological disorders and as a hormonal contraception. 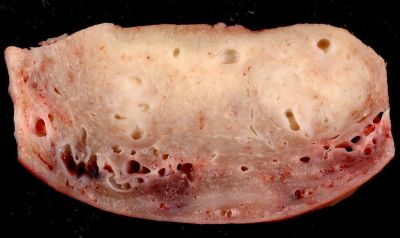 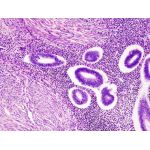 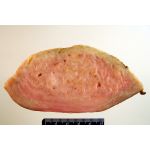