A blockage of both fallopian tubes.

Fallopian tube obstruction is a major cause of female infertility. Blocked fallopian tubes are unable to let the ovum and the sperm converge, thus making fertilization impossible. Approximately 20% of female infertility can be attributed to tubal causes. Distal tubal occlusion (affecting the end towards the ovary) is typically associated with hydrosalpinx (a distally blocked fallopian tube filled with serous or clear fluid, Pic. 1, Pic. 2) formation and often caused by Chlamydia trachomatis. Pelvic adhesions may be associated with such an infection. In less severe forms, the fimbriae may be agglutinated and damaged, but some patency may still be preserved. Midsegment tubal obstruction can be due to tubal ligation procedures as that part of the tube is a common target of sterilization interventions. Proximal (the end towards the uterus) tubal occlusion can occur after infection such as a septic abortion.

While a full testing of tubal functions in patients with infertility is not possible, testing of tubal patency is feasible. A hysterosalpingogram will demonstrate that tubes are open when the radioopaque dye spills into the abdominal cavity. Sonography can demonstrate tubal abnormalities such as a hydrosalpinx indicative of tubal occlusion. During surgery, typically laparoscopy, the status of the tubes can be inspected and a dye such as methylene blue can be injected in a process termed chromotubation into the uterus and shown to pass through the tubes when the cervix is occluded. Laparoscopic chromotubation has been described as the gold standard of tubal evaluation. As tubal disease is often related to Chlamydia infection, testing for Chlamydia antibodies has become a cost-effective screening device for tubal pathology.

Treatment of fallopian tube obstruction has traditionally been treated with fallopian tubal surgery (tuboplasty) with a goal of restoring patency to the tubes and thus possibly normal function. A common modern day method of treatment is in vitro fertilization as it is more cost-effective, less invasive, and results are immediate. Alternative methods such as manual physical therapy are also cited for the ability to open and return function to blocked fallopian tubes in some women. Treatments such as assisted reproductive technologies are used more often than surgery.

Fallopian tube obstruction is a major cause of female infertility. Blocked fallopian tubes are unable to let the ovum and the sperm converge, thus making fertilization impossible.

It has been reported that women with distal tubal occlusion have a higher rate of HIV infection and sexually transmitted infections. Tubal blockage following pelvic procedure that leads to infection, such as appendectomy, ovarian cyst or fibroid removal surgery, or a previous ectopic pregnancy, where also observed.

Sexually transmitted Chlamydia and genital mycoplasma infections are preventable causes of infertility and negative pregnancy outcomes. When the infections progress and ascend, they can result in TFI. Infertility can have multiple possible causes and may not be recognized for years after a gonorrhea, Chlamydia or Mycoplasma infection has caused tubal damage, as the affected woman may not have attempted to become pregnant until years later.

Infertility is the major symptom of TFI and is generally defined as a woman under 35 who has not become pregnant after 12 months without the use of contraception. Twelve months is the lower reference limit for Time to Pregnancy by the World Health Organization. When the inability to conceive is accompanied by signs and symptoms of pelvic inflammatory disease such as lower abdominal pain, TFI may be present. A history of pelvic inflammatory disease, the laproscopic evidence of scarring and a diagnosis of salpingitis supports the diagnosis.

The prevention is based on reducing risks of developing associated diseases together with their suitable treatment, if necessary. The main two are pelvic inflammatory dinase and endometritis caused by STI.

Pelvic inflammatory disease is caused by bacteria that spread from the vagina and cervix and where Infections by Neisseria gonorrhoeae or Chlamydia trachomatis are very often present. Therefore protected sex is adviced and in case o developing PID its appropriate treatment.

The risk of endometritis caused by STIs can be reduced by practicing safe sex, such as using condoms, getting routine screening and early diagnosis of suspected STIs in both yourself and your partner, finishing all treatment prescribed for an STI.

Most women with tubal infertility are asymptomatic, although the more tubal damage is present, the more increases the probability of experiencing a chronic pelvic pain. The major symptom is infertility due to the obstruction.

For fallopian tube obstruction, alternative medicine has been used as a form of fertility treatment. A study of the use of alternative methods showed that only a minority of infertile couples utilize such treatments It also showed that alternative methods are more often chosen by couples who were wealthier, have not yet achieved pregnancy, or had a belief in the effectiveness of such treatments. Of the study participants, 29% used a complementary and alternative medicine (CAM) modality (which refers to healthcare systems, practices, and products that are not considered part of conventional medicine) for treatment, 22% used acupuncture, 17% used herbal therapies like Fuyan Pill, and 1% using meditation.

Treatment of fallopian tube obstruction has traditionally been treated with fallopian tubal surgery (tuboplasty) with a goal of restoring patency to the tubes and thus possibly normal function. A common modern day method of treatment is in vitro fertilization as it is more cost-effective, less invasive, and results are immediate. Alternative methods such as manual physical therapy are also cited for the ability to open and return function to blocked fallopian tubes in some women. Treatments such as assisted reproductive technologies are used more often than surgery.

Pharmacotherapy is not a treatment of choice.

Tuboplasty refers to a number of surgical operations that attempt to restore patency and functioning of the Fallopian tube(s) so that a pregnancy could be achieved. As tubal infertility is a common cause of infertility, tuboplasties were commonly performed prior to the development of effective in vitro fertilization (IVF).

Different types of tuboplasty have been developed and can be applied by laparoscopy or laparotomy. They include lysis of adhesions, fimbrioplasty (repairing the fimbriated end of the tubes), salpinostomy (creating an opening for the tube, video 1), resection and reananstomosis (removing a piece of blocked tube and reuniting the remaining patent parts of the tube), and tubal reimplantation (reconnecting the tube to the uterus). Further, using fluoroscopy (is an imaging technique that uses X-rays to obtain real-time moving images of the interior of an object) or hysteroscopy proximal tubal occlusion can be overcome by unilateral or bilateral selective tubal cannulation, a procedure where a thin catheter is advanced through the proximal portion of the fallopian tube os to examine and possibly restore tubal patency salpinostomy (creating an opening for the tube) or falloposcopy (is the inspection of the fallopian tubes through a micro- endoscope).

Assisted reproductive technology (ART) is a technology used to achieve pregnancy in procedures such as fertility medication, artificial insemination, in vitro fertilization and surrogacy. It is reproductive technology used primarily for infertility treatments, and is also known as fertility treatment. It mainly belongs to the field of reproductive endocrinology and infertility, and may also include intracytoplasmic sperm injection (ICSI) and cryopreservation. Some forms of ART are also used with regard to fertile couples for genetic reasons (preimplantation genetic diagnosis). ART is also used for couples who are discordant for certain communicable diseases; for example, HIV to reduce the risk of infection when a pregnancy is desired.

Among women with older reproductive age, with history of repetitive abortions or genetic disorders, genetic analysis is highly recommended. The PGS/PGD allows studying the DNA of eggs or embryos to select those that carry certain damaging characteristics. It is useful when there are previous chromosomal or genetic disorders in the family, within the context of in vitro fertilization programs.

A woman who has already had a live birth is more likely to have a successful ART procedure than a woman who hasn't given birth before. This history of "previous birth” is counted as an advantage that gradually narrows as women age advances. Many infertile women also believe that emotional distress (for example, tension or worry) is a contributing factor to their lack of natural fertility and lack of success with fertility treatment.

Age of the women and smoking habits of pregnant woman under treatment are found to be linked with the success of the procedure. Delayed childbearing has resulted in an increase in the number of women having children later in life. Thus more women face the problem of age-related infertility and cannot achieve their desired number of children. Childbearing postponement is one of the main reasons for the increasing use of assisted reproductive technology (ART).

ART is currently a commonplace technology that has successfully treated millions of infertile couples the world over. According to the results of a study published in the New England Journal of Medicine recently, live birth rates from ART can approach those of natural fecundity in the general population, as long as the couple and embryo criteria are favorable and there are no contraindications for treatment continuation. However, financial limitations, environmental stresses and repeated implantation failures in the first two or three cycles or implication of other factors reduce live birth rates from ART dramatically.

The long-term evaluation of the offspring of couples who underwent ART compared to offspring conceived naturally, do not show an increase of congenital anomalies and physical growth is similar, as well as the rate of cerebral palsy, however mild neurological disorders are higher in the ART group.

While IVF therapy has largely replaced tubal surgery in the treatment of infertility, the presence of hydrosalpinx is a detriment to IVF success. It has been recommended that prior to IVF, laparoscopic surgery should be done to either block or remove hydrosalpinges. 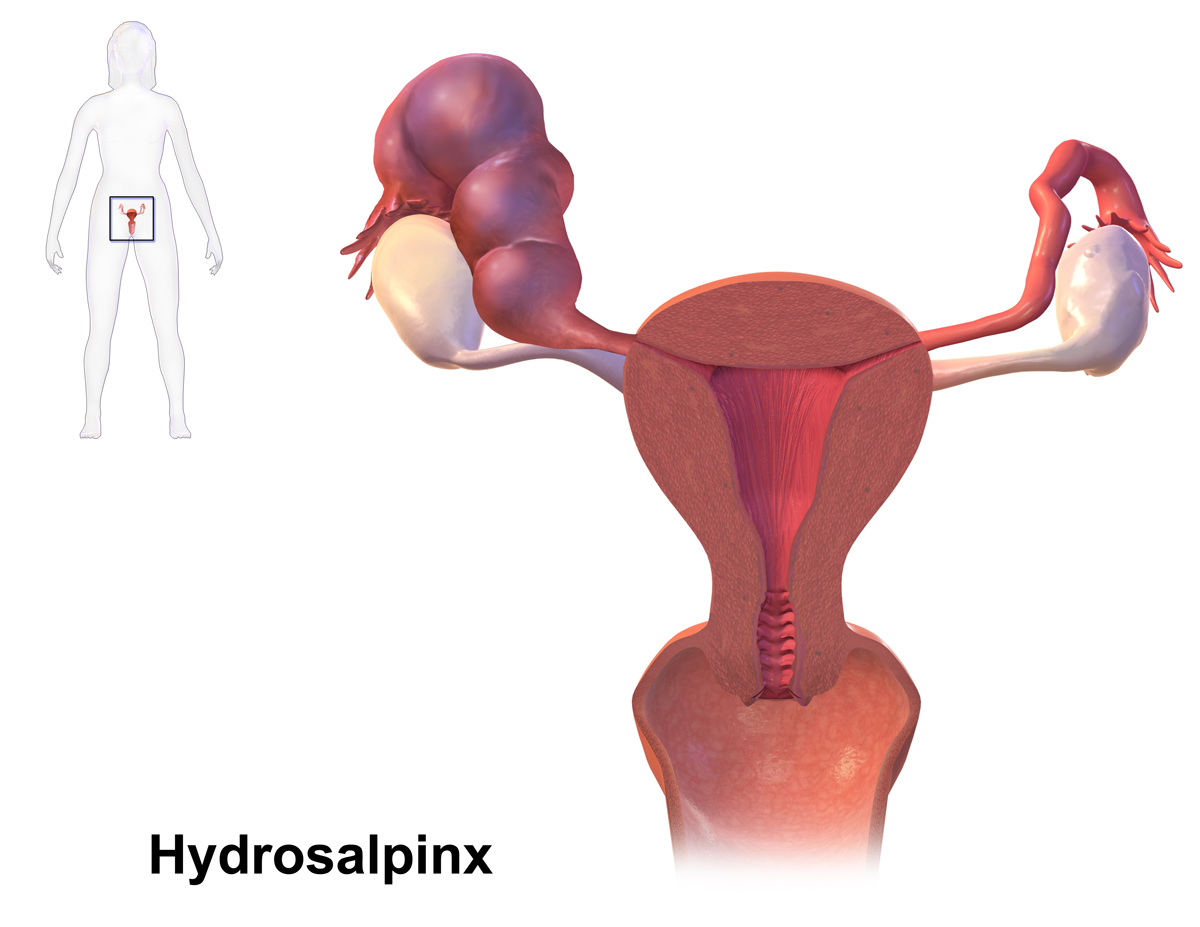 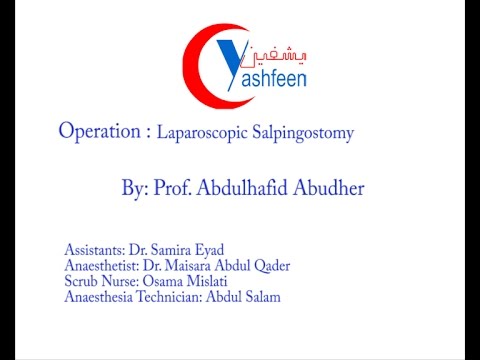 Surgical removal of a Fallopian tube(s). 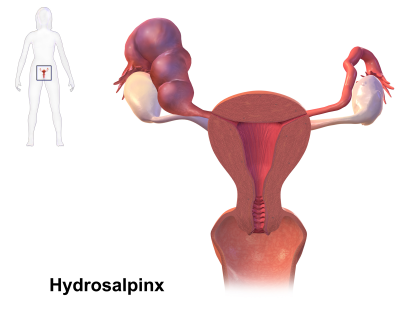 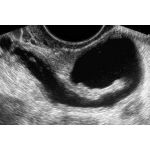