The term Klinefelter syndrome (KS) describes a group of chromosomal disorders in which there is at least one extra X chromosome to a normal male karyotype, 46,XY.

XXY aneuploidy is the most common disorder of sex chromosomes in humans, with prevalence of one in 500 males. Klinefelter syndrome is not inherited; it usually occurs as a random event during the formation of reproductive cells, it is called nondisjunction, and it results in a reproductive cell with an abnormal number of chromosomes. In this case containing an extra X chromosome.

Some males with Klinefelter syndrome have the extra X chromosome only in some of their cells (mosaic Klinefelter syndrome). In addition, 46,XX males also exist and it is caused by translocation of Y material including sex determining region (SRY) to the X chromosome during paternal meiosis. Formal cytogenetic analysis is necessary to make a definite diagnosis, and more obvious differences in physical features tend to be associated with increasing numbers of sex chromosomes. However, Klinefelter syndrome is usually underdiagnosed, with an estimated 25% of the expected number of patients being ever diagnosed, and only a minority being diagnosed in childhood.  If the diagnosis is not made prenatally, 47,XXY males may present with a variety of subtle clinical signs that are age-related.

As babies and children, XXY males may have weaker muscles and reduced strength. Also they have hypospadias, small phallus or cryptorchidism and developmental delay. As they grow older, they tend to become taller than average. They may have less muscle control and coordination than other boys of their age. The older child or adolescent may be discovered during an endocrine evaluation for delayed or incomplete pubertal development with eunuchoid body habitus, gynecomastia, and small testes.  These boys do not produce as much testosterone as other boys, they have a less muscular body, less facial and body hair, and broader hips. As teens, XXY males also have weaker bones, and a lower energy level than other males.

By adulthood, XXY males look similar to males without the condition, although they are often taller. In adults, possible characteristics vary widely and include little to no sign of affectedness, a lanky, youthful build and facial appearance, or a rounded body type with some degree of gynecomastia (increased breast tissue) or breast malignancy. Gynecomastia is present to some extent in about a third of affected individuals, a slightly higher percentage than in the XY population. About 10% of XXY males have gynecomastia noticeable enough that they may choose to have cosmetic surgery.

Affected males are often infertile, or may have reduced fertility. Advanced reproductive assistance is sometimes possible.

The term hypogonadism in XXY symptoms is often misinterpreted to mean "small testicles" or "small penis". In fact, it means decreased testicular hormone/endocrine function. Because of this (primary) hypogonadism, individuals will often have a low serum testosterone level but high serum follicle-stimulating hormone (FSH) and luteinizing hormone (LH) levels. Despite this misunderstanding of the term, however, it is true that XXY men may also have microorchidism (i.e., small testicles).

XXY males are also more likely than other men to have certain health problems that typically affect females, such as autoimmune disorders, breast cancer, venous thromboembolic disease, and osteoporosis. In contrast to these potentially increased risks, it is currently thought that rare X-linked recessive conditions occur less frequently in XXY males than in normal XY males, since these conditions are transmitted by genes on the X chromosome, and people with two X chromosomes are typically only carriers rather than affected by these X-linked recessive conditions.

Some degree of language learning or reading impairment may be present, and neuropsychological testing often reveals deficits in executive functions, although these deficits can often be overcome through early intervention. There may also be delays in motor development which can be addressed through occupational therapy and physical therapy. XXY males may sit up, crawl, and walk later than other infants; they may also struggle in school, both academically and with sport.

Risk of acquiring breast carcinoma in 47,XXY is relatively increased, with relative risk exceeding 200 times. The cause may result from the estradiol to testosterone ratio being severalfold higher than that of karyotypically normal men or possibly due to an increased peripheral conversion of testosterone to estradiol in men with Klinefelter syndrome.

There is no self-therapy of infertile men with Klinefelter syndrome, but there are many ways to treat the symptoms of the XXY condition.

Educational treatments
As children, many XXY males qualify for special services to help them in school. Teachers can also help by using certain methods in the classroom, such as breaking bigger tasks into small steps.

Other therapeutic options
A variety of therapists, such as physical, speech, occupational, behavioural, mental health, and family therapists, can often help reduce or eliminate some of the symptoms of the XXY condition, such as poor muscle tone, speech or language problems, or low self-confidence.

Pharmacotherapy
The age for testosterone replacement in these patients is controversial, yet clear clinical and biochemical signs of hypoandrogenism are an undisputed indication for the initiation of androgen therapy. Androgen replacement therapy should begin at puberty, around age 12 years, in increasing dosage sufficient to maintain age appropriate serum concentrations of testosterone, estradiol, follicle stimulating hormone (FSH), and luteinizing hormone (LH).
Surgical therapy

There i no surgical therapy for this condition.

Their ejaculate is usually azoospermic, and levels of testosterone are typically low to low-normal. A major advancement in recent years has been the introduction of IVF with ICSI which allows successful fertilization even with immature sperm or sperm obtained directly from testicular tissue. IVF-ICSI allows for pregnancy in couples where the man has irreversible testicular azoospermia as long as it is possible to recover sperm material from the testes. Thus men with non-mosaic Klinefelter's syndrome have fathered children using IVF-ICSI. Pregnancies have been achieved in situations where azoospermia was associated with cryptorchism and sperm where obtained by testicular sperm extraction (TESE).

A cancer that develops from breast tissue.

A releasing hormone responsible for the release of follicle-stimulating hormone (FSH) and luteinizing hormone (LH) from the anterior pituitary.

A hormone, that stimulates ovulation and the development of the corpus luteum in females, and the production of androgens in males.

An abnormally low testosterone production which may occur because of testicular or hypothalamic-pituitary dysfunction.

Absence of sperm in ejaculate

The medical condition of a man whose semen contains no sperm.

When a child takes longer than other children of the same age to reach expected milestones in movement, behaviour and learning.

A disorder of the endocrine system in which there is a non-cancerous swelling of the breast tissue in boys or men.

A birth defect of the urethra in the male where the urinary opening is not at the usual location on the head of the penis.

Immobile or dead spermatozoa in semen

A condition in which spermatozoa in semen are either immobile or dead.

Reduced body hair and loss of muscle mass in males.

Lack of semen with ejaculation

Aspermia is the complete lack of semen with ejaculation.

A condition in which a man has an unusually low ejaculate (or semen) volume, less than 1.5 ml.

An adult penis with an erect length of less than 7 cm or 2.76 inches.

Hormonal therapy, which is used as an adjuvant treatment of Klinefelter syndrome. 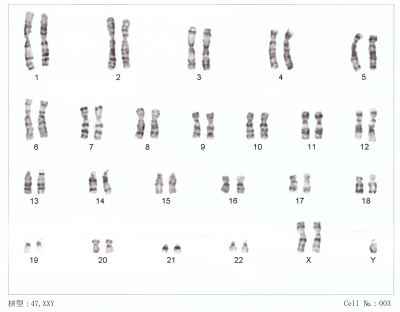 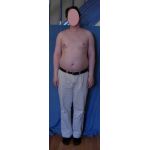