The oligozoospermia is a male diagnosis defined as a low sperm in the ejaculate whilst the sexual and ejaculation function is normal. This diagnosis belongs to a group of diagnosis of abnormal sperm quality (Pic. 1).

Sperm concentration (or sperm count) is the number of sperm in the ejaculate. The World Health Organization (WHO) now considers a low sperm count is less than 15 million sperm / ml.

It is important to say, that the sperm count is a relatively sensitive measure of overall health. Oligozoospermia can be the result of many factors; depending on the causing factors, oligozoospermia may be permanent or reversible. Chronic stress and sleeping disorders, work and emotional issues as well as unhealthy lifestyle, obesity, use of alcohol, tobacco or recreational drugs can all lower the sperm count at otherwise healthy men. Generally said, these effects are reversible upon recovery. Notably, pills to improve man erection, such as Viagra, Levitra and Cialis do not cause low sperm count.

Except health issues explained above, the causes of oligozoospermia include:

Oligozoospermia is the abnormality of sperm count in semen. Depending upon the sperm count, the chance of conception can be lower than at a healthy man. The smaller sperm count is, the chance to conceive decreases. However, chances are very good if a female partner is fertile.

There are no specific symptoms of oligozoospermia. The patient usually gets to know the diagnosis when having problems with conception.

The secondary symptoms can vary in dependence on underlying condition such as healthy lifestyle, level of stress, anxiety or weakened immune system due to infection or illness. At some risk factors we can observe more symptoms such as those:

A conservative regime can improve a semen quality after a transient illness or due to secondary factors. It is recommended to reduce the level of stress, achieve the optimal weight and the attention ought to be paid to healthy lifestyle. It is recommended to limit or avoid the alcohol intake as well as smoking.

The sperm count may be increased by several treatments, depending upon the patient health and other complications.

Varicocele surgery contains supra-inguinal ligation, open ligation is usually reserved for 5 % of recurrences that occur. Bilateral varicocele may be treated laparoscopically. Most couples may prefer assisted conception however obliteration of internal spermatic veins by interventional radiology is also often accepted (especially if the female partner is younger than 30 years).

Bulborethral gland is one of two small exocrine glands in the reproductive system of male.

An abnormally low testosterone production which may occur because of testicular or hypothalamic-pituitary dysfunction. 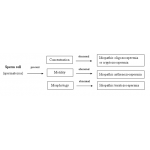