An autoantibody is an antibody (a type of protein) produced by the immune system that is directed against one or more of the individual's own proteins. Many autoimmune diseases, (notably lupus erythematosus), are caused by such autoantibodies.

Clinically, antibodies against sperm are found in 3% to 12% of men who undergo evaluation for infertility and can be found in the serum, seminal plasma or sperm-bound. As antibodies in the serum cannot logistically bind to sperm unless they transudate into semen, these immunoglobulins are considered clinically less important than sperm-bound antibodies. The presence of anti-sperm antibodies in infertile men was first reported in 1954 by Rumke and Wilson. Anti sperm antigen has been described as three immunoglobulin isotopes (IgG, IgA, IgM) each of which targets different part of the spermatozoa. If more than 10% of the sperm are bound to anti-sperm antibodies (ASA), then infertility is suspected.

Specific tests have been developed focusing on sperm surface immunity. ASA is determined by the mixed antiglobulin reaction (MAR) test, and the type and location of ASA is determined by the immunobead test.  Immunoglobulins subclasses IgA and IgG have been demonstrated in the ejaculates of men with antisperm autoimmunity, whereas IgM seems to have no clinical impact because it is rarely detected alone or combined with IgA or IgG. From the biological standpoint, IgA seems to be the most important immunoglobulin, which levels at the sperm surface significantly impair sperm progression through the cervical mucus. Immunoglobulins can adhere regardless of their subclasses to various sperm sites.

The formation of antisperm antibodies (ASA) may be a consequence of rupture in the blood-testis barrier. Overwhelming inoculations with sperm antigens or a defect in active immunosuppression may also lead to ASA formation. Obstruction, inflammation and trauma of the genital tract, as well as cryptorchidism, varicoceles and vasectomy have been associated with elevated levels of ASA.

The risk factors for developing antisperm antibodies including a history of testicular injury, torsion, vasectomy/reversal, or infection. Alteration of steroid hormone levels such as testosterone in the seminal plasma of males with ASA has been mentioned in certain articles which suggest a relationship between testicular steroid hormone levels and autoimmunity to sperm antibodies (Pic.1).

Autoantibodies to sperms are present approximately in 10% of infertile males and in (24.6% and 32%) among patients with varicocele.

Some possible pathophysiological mechanisms of the development of infertility are linked either to inhibition of spermatogenesis resulting from testicular damage or autoimmune process. ASA impair the fertilizing ability of spermatozoa by acting negatively on sperm motility, sperm agglutination and cytotoxic reaction which could lead to poor cervical mucus penetration and in vitro gamete interaction (Table 1). Sperm-bound antibodies have been found to impair sperm function only when the degree of antibody binding is very high (>50%).

Because sperm autoantibodies are very often associated with varicocele, there are some patologies which affects fertility due to varicocele. There is possible correlation between fructose, which is secreted under the effect of androgen hormone, and autoimmunity, which might play a role in varicocele associated infertility, in reducing sperm motility. Biochemical evaluation of seminal fluids suffering from varicocele provided some evidence on reduced fertility of their gametes.

However, data about the influence of varicocele on ASA formation are contradictory. Surgical correction of varicocele did not show any significant differences in semen parameters in men with or without ASA. Although 50% of men with clinically palpable varicoceles were documented to have positive ASA, but the clinical significant of ASA is low and does not influence infertility prognosis. Theoretically, in patients with varicocele, the testes suffers deleterious tissue effect which sometimes leads to a complete atrophy that attributed to the prolonged venous stasis and hyperthermia and might induce antibody formation. In addition, reduced E-cadherin and α-catenin expression at the junctions between adjacent Sertoli cells in varicocele cases might also lead to a disruption of blood-testis barrier and the production of antibodies. The debate over ASA and varicocele will continue as a number of questions remain to be answered, such as the exact role of ASA in infertility, which method of ASA testing is optimal for screening and final determination, what threshold levels of ASA are significant, which part on spermatozoa are involved in binding, how ASA interfere with the different steps in fertilization process, and what is the best method used for treatment of cases with ASAs-related infertility.

There is no self-therapy for this condition.

Corticosteroids were traditionally used as a treatment of infertile patients with anti-sperm antibodies. But these drugs are associated with many systemic side effects and should not be used in patients with history of diabetes mellitus, hypertension and peptic ulcer.

The immune modulator zinc sulfate presents reduced systemic side effects and could be used as an alternative for corticosteroids. Low zinc levels in body shown negative effect on concentration of testosterone in serum. Also lower levels of zinc leads to decreased seminal volume. Concentration of zinc in seminal plasma is correlated with sperm density, possibly contributing a positive effect on spermatogenesis. Treatment with zinc can improve sperm motility.

No surgical therapy can heal this condition.

Alternatives to overcome the deleterious effects of ASA, such as medication, sperm washing combined with intrauterine insemination and in vitro fertilization have been attempted. Various techniques for semen manipulation have been proposed to elute ASA bound spermatozoa and obtain ASA-free sperm pools. The success rates of these techniques in terms of effective recovery of spermatozoa not involved in antisperm antibody reaction are conflicting, with most reports showing limited success due to the great difficulty of eluting the sperm cell surface by any washing method.

Recent reports have shown that in vitro fertilization with intracytoplasmic sperm injection (ICSI) is very promising, because it can overcome all potential ASA-related barriers. The fertilization, embryo development, pregnancy success and miscarriage rates after ICSI in men exhibiting varying levels of autoimmunity against spermatozoa were within the same range as our population of ICSI patients with severely abnormal seminal parameters (Tab. 2). It was speculated that ASA may become inactive within the ooplasm after microinjection, or that a segregation process may take place during the first cleavage divisions. These hypotheses seem reasonable to explain why no differences on ICSI outcome are seen in ASA patients, since inactivation and segregation also occur with the acrosome and sperm tail after microinjection.

However, male immunological infertility is uncommon, and only few studies on assisted reproduction techniques have been conducted on this field. 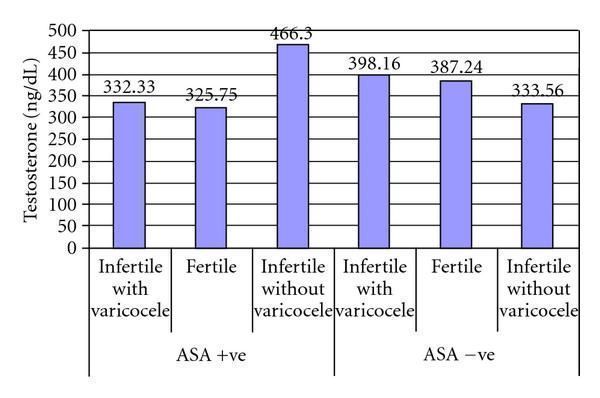 Damage of the testicles or scrotum which may be temporary or permanent.

Medications used in the treatment of antisperm antibodies. 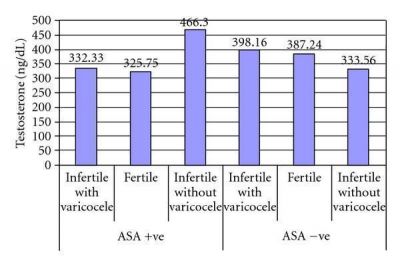 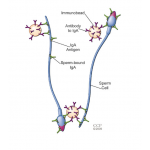