Tubal ligation is a surgical procedure for sterilization in which a woman's fallopian tubes are clamped and blocked, or severed and sealed, either method of which prevents eggs from reaching the uterus for implantation. However, fertilization can still occur in the fallopian tubes. While its benefits, such as effectiveness in protecting against pregnancies, minimal need for long-term follow-up and low side-effects profile are well documented, it has many reported complications. Hormone production, libido, and the menstrual cycle can be affected by a tubal ligation.

In women, a tubal ligation can be done in many forms; through a vaginal approach, through laparoscopy, a minilaparotomy ("minilap"), or through regular laparotomy. With traditional tubal ligation, the surgeon severs the tubes, and then ties (ligates) them off thereby preventing the travel of eggs to the uterus. Also, a distinction is made between postpartum tubal ligation and interval tubal ligation, the latter not being done after a recent delivery. There are a variety of tubal ligation techniques; the most noteworthy are the Pomeroy type that was described by Ralph Pomeroy in 1930, the Falope ring that can easily be applied via laparoscopy, and tubal cauterization done usually via laparoscopy. In addition, a bilateral salpingectomy is effective as a tubal ligation procedure. A tubal ligation can be performed as a secondary procedure when a laparotomy is done; i.e. a cesarean section. Any of these procedures may be referred to as having one's "tubes tied."

It is advised that women should not undergo this surgery if they currently have or had a history of bladder cancer because risks associated with tubal ligation include bladder injury or bladder infections after surgery.

Tubal sterilization is an increasingly common method of contraception. Available evidence suggests that sterilization fails in 0.13-1.3% of sterilization procedures and of these, 15-33% will be ectopic pregnancies. The risk of ectopic pregnancy is 12.5% for women who have had tubal ligation, which is a greater risk than for those who have not had the surgery. An ectopic or extra uterine pregnancy is one in which the blastocyst implants anywhere other than the endometrial lining of the uterine cavity. Recanalization or formation of tuboperitoneal fistulas occur, the openings of which are large enough for passage of sperm but too small to allow an ovum to push through, resulting in fertilization/implantation in the distal tubal segment. The history of tubal sterilization does not rule out the possibility of ectopic pregnancy even many years after the procedure and prophylactic bilateral salpingectomy may be considered in such cases that there is no obvious tubal lesion.

Before doing a tubal ligation, woman should discuss side effects and risks with her doctor so the woman would understand and would be able to adjust side effect, such as Post tubal ligation syndrome (abnormal bleeding and/or pain, changes in sexual behavior and emotional health, increased premenstrual distress).

There is no effective treatment.

Tubal reversal surgeries require the techniques of microsurgery to open and reconnect the fallopian tube segments that remain after a tubal sterilization, reimplant remaining segments, or create new fimbria.

A subjective feeling of tiredness which is distinct from weakness, which has a gradual onset.

A surgical procedure that can restore fertility to women after a tubal ligation. 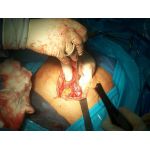