Tubal phimosis refers to a situation where the tubal end is partially occluded (Pic. 1), in this case fertility is impeded, and the risk of an ectopic pregnancy is increased. Most commonly a tube may be obstructed due to infection such as pelvic inflammatory disease (PID). In addition, also the end of fertile life (early menopause) can be a source of such injury.

Tubal phimosis can lead to a hydrosalpinx (a distally blocked fallopian tube filled with serous or clear fluid).

Diagnosis is usually difficult. Procedures that are used to determine whether the fallopian tubes are blocked, for example: laparoscopy (an operation performed in the abdomen or pelvis through small incisions with the aid of a camera) or hysteroscopy (the inspection of the uterine cavity by endoscopy with access through the cervix).

Treatment of fallopian tube damage has traditionally been treated with fallopian tubal surgery (tuboplasty) with a goal of restoring patency to the tubes and thus possibly normal function. Treatments such as assisted reproductive technologies are used more often than surgery.

The overall prognosis depends principally on the severity of the damage, hence, assessment of tubal damage plays a major role in predicting occurrence of pregnancy and the likelihood of developing ectopic pregnancy.

Patients with tubal phimosis are at increased risk for ectopic pregnancy. Ectopic pregnancy occurs in around 1-2% of all pregnancies. Ectopic pregnancy is still the most common cause of first trimester maternal death, accounting for 73% of early pregnancy mortality. The incidence of ectopic pregnancy has increased markedly over the last three decades. This is probably due to multiple factors such as the increased prevalence of pelvic inflammatory disease (PID), use of assisted reproductive technology, and increasing maternal age.

In the female reproductive system, the fimbria is a fringe of tissue around the ostium of the Fallopian tube, in the direction of the ovary.

An ovary is not directly connected to its adjacent Fallopian tube. When ovulation is about to occur, the sex hormones activate the fimbriae, causing it to swell with blood and hit the ovary in a gentle, sweeping motion. An oocyte is released from the ovary into the peritoneal cavity and the cilia of the fimbriae sweep the ovum into the Fallopian tube. This leads to tubal pregnancy. Hair-like cilia located on the internal surface of the Fallopian tubes carry the fertilized egg to the uterus. Fallopian cilia are sometimes seen in reduced numbers subsequent to an ectopic pregnancy, leading to a hypothesis that cilia damage in the Fallopian tubes is likely to lead to an ectopic pregnancy. As cilia degenerate the amount of time it takes for the fertilized egg to reach the uterus will increase. The fertilized egg, if it doesn't reach the uterus in time, will hatch from the non-adhesive zona pellucida and implant itself inside the fallopian tube, thus causing the pregnancy.

Female infertility caused by tubal phimosis can impede the descents of a fertilized or unfertilized ovum into the uterus through the Fallopian tubes and prevents a normal pregnancy and full term birth.

Tubal factor infertility represents around 20-25% of all the issues of infertility. The evaluation of the fallopian tube is necessary to determine the management plan of infertility. A number of diagnostic tests are being used in clinical practice to assess tubal patency as part of the work-up for subfertility.

Alternative methods such as manual physical therapy are also cited for the ability to open and return function to blocked fallopian tubes in some women. A study of the use of alternative methods showed that only a minority of infertile couples utilize such treatments.

Pharmacotherapy is not used to treat tubal phimosis.

Treatment of fallopian tube obstruction has traditionally been treated with fallopian tubal surgery (tuboplasty) with a goal of restoring patency to the tubes and thus possibly normal function.

Endoscopy (whether laparoscopy or hysteroscopy) play a central role in the management of tubal disease. Permanent correction of the patient’s problem with frequent chances of pregnancy is a definite advantage of endoscopic surgery. The concept of reconstruction following microsurgical principles coupled with refinement of instrumentation and techniques is would improve the results of hysteroscopic and laparoscopic approaches.

With the advent of in vitro fertilisation (IVF) which bypasses the need for tubal function a more successful treatment approach has become available for women who want to conceive. IVF has now become the major treatment for women to achieve a pregnancy.

For older women with any significant degree of distal tubal disease, IVF is generally the first and best option because cycle fecundability after distal tubal surgery is low (1% to 2%), time is limited, and IVF is both more efficient and more effective.

IVF and ART (assisted reproductive technology) generally start with stimulating the ovaries to increase egg production. Most fertility medications are agents that stimulate the development of follicles in the ovary. Examples are gonadotropins and gonadotropin releasing hormone. After stimulation, the physician surgically extracts one or more eggs from the ovary, and unites them with sperm in a laboratory setting, with the intent of producing one or more embryos. Fertilization takes place outside the body, and the fertilized egg is reinserted into the woman's reproductive tract, in a procedure called embryo transfer. A woman who has already had a live birth is more likely to have a successful ART procedure than a woman who hasn't given birth before.

While IVF therapy has largely replaced tubal surgery in the treatment of infertility, the presence of hydrosalpinx is a detriment to IVF success. It has been recommended that prior to IVF, laparoscopic surgery should be done to either block or remove hydrosalpinges. 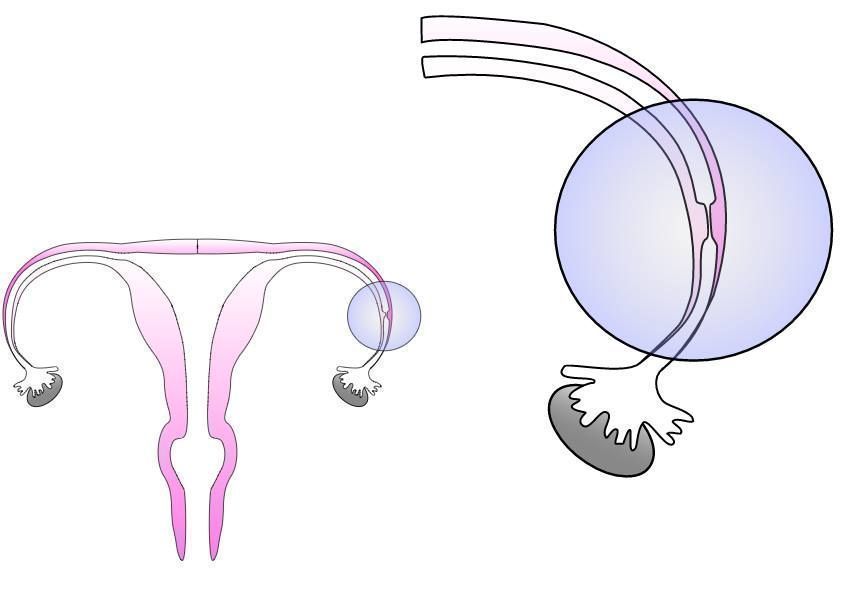 The inspection of the uterine cavity by endoscopy with access through the cervix.

Treatment option for women whose tubes were blocked by tubal ligation and will be rejoined again. 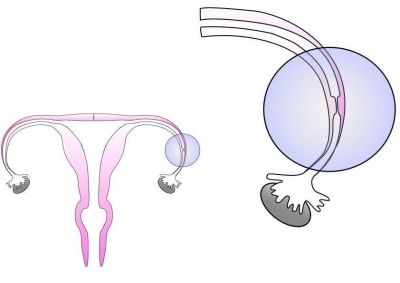