In the female, Müllerian ducts will develop to form the uterine tubes, uterus, cervix, and the upper one-third of the vagina; in the male, they are lost. This abnormal development can lead to uterine malformations resulting from aplasia of a part of Müllerian duct. Morphological abnormalities can vary from insufficient fission of tissues causing bicornuate uterus, double uterus or preserved uterine septum or in case of Müllerian aplasia to absent uterus.

The prevalence of uterine malformation is estimated to be 6.7% in the general population, slightly higher (7.3%) in the infertility population, and significantly higher in a population of women with a history of recurrent miscarriages
Judged by the extent of morphological pathology the American Fertility Society (now American Society of Reproductive Medicine) classification distinguishes several types of malformation, as described below.

The condition is also called Mayer-Rokitansky-Küster-Hauser (MRKH) syndrome, which is characterized by congenital aplasia of the uterus and the upper part (2/3) of the vagina in women showing normal development of secondary sexual characteristics and a normal 46, XX karyotype.

The uterus is formed from one only of the paired Müllerian ducts while the other Müllerian duct does not develop or only in a rudimentary fashion. The sometimes called hemi-uterus has a single horn linked to the ipsilateral fallopian tube that faces its ovary.

One of the least common amongst Mullerian duct anomalies (MDAs). Both Müllerian ducts develop but fail to fuse, thus the patient has a "double uterus". This may be a condition with a double cervix and a vaginal partition, or the lower Müllerian system fused into its unpaired condition.

Only the upper part of that part of the Müllerian system that forms the uterus fails to fuse, thus the caudal part of the uterus is normal, the cranial part is bifurcated. The uterus is "heart-shaped". It is a uterus composed of two "horns" separated by a septum. In humans, a bicornuate uterus is a type of uterine malformation, but in some other mammalian species, including rodents and pigs, it is normal.

The two Müllerian ducts have fused, but the partition between them is still present, splitting the system into two parts. With a complete septum the vagina, cervix and the uterus can be partitioned. Usually the septum affects only the cranial part of the uterus.

A form of septate uterus, i.e. an incompletely septated uterus or uterus subseptus, is one of the most common forms of congenital uterine malformations.

The uterine cavity has a "T-shape". The t-shaped malformation is commonly associated with  in-utero exposure (the so-called "DES-daughters").

An uterine remnant not connected to cervix and vagina and may be found on the other side of unicornuate uterus.

For diagnosing uterine malformation, the physician will need imaging techniques besides a physical examination to determine the character of the malformation: gynecologic ultrasonography, pelvic MRI, or hysterosalpingography. A hysterosalpingogram is not considered as useful due to the inability of the technique to evaluate the exterior contour of the uterus and distinguish between a bicornuate and septate uterus. In addition, laparoscopy and/or hysteroscopy may be indicated.

Patients with uterine abnormalities may have associated renal abnormalities including unilateral renal agenesis, vertebral, and, to a lesser extent, auditory and cardiac defects, associated gynecological and obstetric complications such as infertility, endometriosis, hematometra, urinary tract anomalies, abortions, preterm deliveries and malpresentation, double vagina or genital neoplasms. In the female, Müllerian ducts will develop to form the uterine tubes, uterus, cervix, and the upper one-third of the vagina; in the male, theyare lost. This abnormal development can lead to uterine malformations resulting from aplasia of a part of Müllerian duct. Morphological abnormalities can vary from insufficient fission of tissues causing bicornuate uterus, double uterus or preserved uterine septum or in case of Müllerian aplasia to absent uterus.

Depending on the nature of the handicap, mostly associated with gynecological and obstetric complications such as infertility, endometriosis, hemometra, urinary tract anomalies, abortions, preterm deliveries, fetal malformations, malpresentation.

Uterine malformations are associated with genetic and teratogenic factors. Using uncertified contraceptives (e.g. diethylstilbestrol), and any other substance with teratogenic potential, can be seen as problematic. Fetus is the most vulnerable in the period of 2 to 12 weeks.

In case of Müllerian agenesis for example, when uterus is absent, the conception and in some cases, sexual intercourse is physically impossible. In other types of infliction, fertility can be unaffected, however mostly, the inception ratio is lowered. Because the most problematic is gravidity and delivery itself, the patient should be carefully monitored by obstetrician.

Depending on the malformation type, symptoms range from amenorrhea, infertility, recurrent pregnancy loss, and cramps or pain, to normal functioning depending on the nature of the defect. In some patients the vaginal development may be affected.

Because of the morphological nature of the diagnosis, self or alternative therapy is not applicable. Still, as some sort of an alternative therapy, mental care could be recognized. Psychological distress is very important in young women with Müllerian duct anomalies. It is essential for the patients and their families to attend counseling before and throughout treatment.

The most important thing is proper diagnose, the therapy based on clinical symptoms differs from careful monitoring by obstetrician to surgical solution.

Mostly additional treatment to the surgical solution. Drugs to help epithelization processes and anti-adhesion drugs are administered after the surgery. Antibiotic therapy should be part of the pharmacotherapy. Hormonal therapy is used to help women with conception.

There are several surgical techniques depending on the type of malformation. Laparoscopic or hysteroscopic methods are used:

It is an operation performed in the abdomen or pelvis through small incisions (usually 0.5–1.5 cm) with the aid of a camera. The laparoscope allows doctors to perform both minor and complex surgeries with a few small cuts in the abdomen.There are a number of advantages to the patient with laparoscopic surgery versus an open procedure. These include reduced pain due to smaller incisions and hemorrhaging, and shorter recovery time.

The inspection of the uterine cavity by endoscopy with access through the cervix. It allows for the diagnosis of intrauterine pathology and serves as a method for surgical intervention (operative hysteroscopy). A hysteroscope is an endoscope that carries optical and light channels or fibers. It is introduced in a sheath that provides an inflow and outflow channel for insufflation of the uterine cavity. In addition, an operative channel may be present to introduce scissors, graspers or biopsy instruments. A hysteroscopic resectoscope is similar to a transurethral resectoscope and allows entry of an electric loop to shave off tissue. A contact hysteroscope is a hysteroscope that does not use distention media.

The most often method is IVF-ICSI in combination with some surgical solution and pharmacotherapy. Own oocytes or donated ones may be used, depending on woman' age and quality of her eggs. Multiple pregnancies may have a negative impact on the likelihood of a full term pregnancy; therefore,  a singleton pregnancy should be ensured by eSET (elective single embryo transfer) in these patients. If the uterus is absent, surrogate mother is needed to carry a baby. 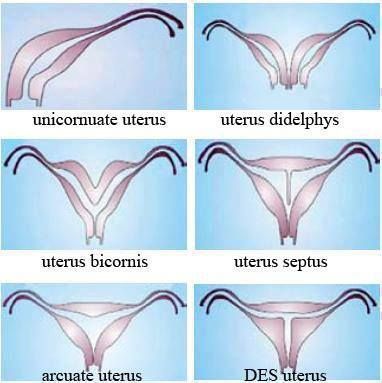 A rare symptom that occurs when the vagina doesn't develop. 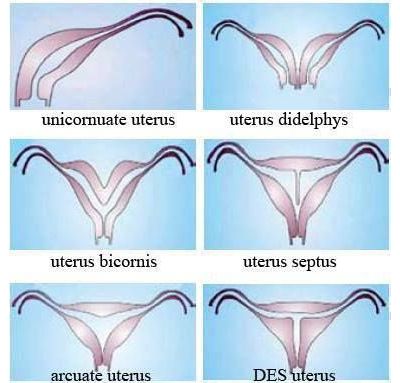