Triangular-shaped glands located on top of the kidneys and producing hormones including adrenaline and the steroids aldosterone and cortisol.

One of the major functions of the adrenal gland is to respond to stress. Stress can be either physical, psychological or both. Physical stresses may include injury, exposure to severe temperatures or malnutrition. Psychological stresses include the perception of a physical threat, a fight with a loved one, or just a bad day at school.

The adrenal gland responds in different ways to short-term stress and long-term stress following a pattern known as the general adaptation syndrome (GAS). Stage one of GAS is called the alarm reaction. This is short-term stress, the fight-or-flight response, mediated by the hormones epinephrine and norepinephrine from the adrenal medulla. Their function is to prepare the body for extreme physical exertion. Once this stress is relieved, the body quickly returns to normal. The section on the adrenal medulla covers this response in more detail.

If the stress is not soon relieved, the body adapts to the stress in the second stage called the stage of resistance. If a person is starving for example, the body may send signals to the gastrointestinal tract to maximize the absorption of nutrients from food.

If the stress continues for a longer term however, the body responds with symptoms quite different than the fight-or-flight response. During the stage of exhaustion, individuals may begin to suffer depression, the suppression of their immune response, severe fatigue, or even a fatal heart attack. These symptoms are mediated by the hormones of the adrenal cortex, especially cortisol, released as a result of signals from the hypothalamic-pituitary-adrenal (HPA) axis (system that controls reactions to stress and regulates many body processes, including digestion, the immune system, mood and emotions, sexuality, and energy storage and expenditure).

Adrenal hormones also have several non–stress-related functions, including the increase of blood sodium and glucose levels, which will be described in detail below (Pic. 1).

The adrenal glands are small glands located on top of each kidney (Pic. 2). The adrenal gland (Pic. 3) consists of an outer cortex of glandular tissue and an inner medulla of nervous tissue. The cortex itself is divided into three zones and each region secretes its own set of hormones:

The adrenal cortex, as a component of the HPA axis, secretes steroid hormones important for the regulation of the long-term stress response, blood pressure and blood volume, nutrient uptake and storage, fluid and electrolyte balance; and inflammation. The HPA axis involves the hypothalamus stimulating the release of adrenocorticotropic hormone (ACTH) from the pituitary. ACTH then stimulates the adrenal cortex to produce the hormone from the cortex (corticosteroids).

The adrenal medulla is neuroendocrine tissue composed of postganglionic sympathetic neurons. It is really an extension of the autonomic nervous system. This neuroendocrine pathway, controlled by the hypothalamus, involves stimulation of the medulla by impulses from preganglionic sympathetic neurons originating in the thoracic spinal cord. Stimulation causes the medulla to secrete the amine hormones epinephrine and norepinephrine.

Several disorders are caused by the dysregulation of the hormones produced by the adrenal glands.

Cushing’s disease is a disorder characterized by high blood glucose levels and the accumulation of lipid deposits on the face and neck. It is caused by excess secretion of cortisol. The most common source of Cushing’s disease is a pituitary tumor that secretes ACTH in abnormally high amounts. Other common signs of Cushing’s disease include the development of a moon-shaped face, a buffalo hump on the back of the neck, rapid weight gain, and hair loss. Chronically elevated glucose levels are also associated with an elevated risk of developing type 2 diabetes. In addition to hyperglycemia, chronically elevated glucocorticoids compromise immunity, resistance to infection, and memory, and can result in rapid weight gain and hair loss. Long term glucocorticoid use for inflammatory conditions such as rheumatoid arthritis or to prevent transplant rejection can cause symptoms similar to those in Cushing’s disease.

In contrast, the hyposecretion of corticosteroids can result in Addison’s disease, a rare disorder that causes low blood glucose levels and low blood sodium levels. The signs and symptoms of Addison’s disease are vague and are typical of other disorders as well, making diagnosis difficult. They may include general weakness, abdominal pain, weight loss, nausea, vomiting, sweating, and cravings for salty food. Treatment involves injections of glucocorticoids.

Congenital adrenal hyperplasia (CAH) consists of a family of defects in the synthesis of steroid hormones in the adrenal cortex. It is caused by a defect in the 21-hydroxylase gene (CYP21) in more than 90% of the cases. The enzyme deficiency results in impaired synthesis of cortisol and aldosterone. The low cortisol level results in increased pituitary production of ACTH, which results in high androgen levels. The androgen excess is present from early embryogenesis and results in varying degrees of virilization (condition in which women develop male-pattern physical traits) of the external genitalia in girls.

Adrenal cancer is abnormal growth on the adrenal glands. Most are benign (non-cancerous), and are called adenomas, but may cause significant health problems by unbalancing hormones. Malignant adrenal growths (cancers) are rare. 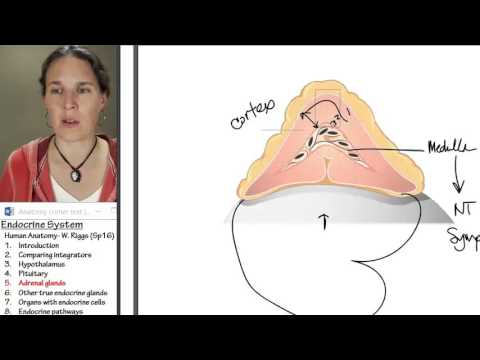 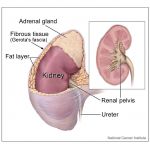 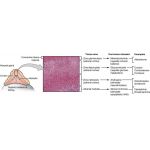