The cervix produces mucus secretions that become thin and stringy under the influence of high systemic plasma estrogen concentrations, and these secretions can facilitate sperm movement through the reproductive tract. The cervical canal is a pathway through which sperm enter the uterus after sexual intercourse, and some forms of artificial insemination.Some sperm remains in cervical crypts, infoldings of the endocervix, which act as a reservoir, releasing sperm over several hours and maximizing the chances of fertilization.

Several hundred glands in the endocervix produce 20–60 mg of cervical mucus a day, increasing to 600 mg around the time of ovulation. It is viscous as it contains large proteins known as mucins. The viscosity and water content varies during the menstrual cycle; mucus is composed of around 93% water, reaching 98% at midcycle. These changes allow it to function either as a barrier or a transport medium to spermatozoa.

The cervix plays a major role in childbirth. Along with other factors, midwives and doctors use the extent of cervical dilation to assist decision making during childbirth.Generally, the active first stage of labour, when the uterine contractions become strong and regular, begins when the cervical dilation is more than 3–5 cm (1.2–2.0 in).The second phase of labor begins when the cervix has dilated to 10 cm (4 in), which is regarded as its fullest dilation, and is when active pushing and contractions push the baby along the birth canal leading to the birth of the baby.

As a component of the female reproductive system, the cervix is derived from the two paramesonephric ducts (also called Müllerian ducts), which develop around the sixth week of embryogenesis. During development, the outer parts of the two ducts fuse, forming a single urogenital canal that will become the vagina, cervix and uterus.The cervix grows in size at a smaller rate than the body of the uterus, so the relative size of the cervix over time decreases, decreasing from being much larger than the body of the uterus in fetal life, twice as large during childhood, and decreasing to its adult size, smaller than the uterus, after puberty.

The cervix is the lower part of the uterus in the human female reproductive system (Pic. 1) In a non-pregnant woman, the cervix is usually between 2 and 3 cm long and roughly cylindrical in shape (Pic. 2). The narrow, central cervical canal runs along its entire length, connecting the uterine cavity and the lumen of the vagina.

The opening into the uterus is called the internal os and the opening into the vagina is called the external os (Pic. 3). The mucosa lining the cervical canal is known as the endocervix and the mucosa covering the ectocervix is known as the exocervix.
The cervix has an inner mucosal layer, a thick layer of smooth muscle, and posteriorly the supravaginal portion has a serosal covering consisting of connective tissue and overlying peritoneum.

The squamocolumnar junction of the cervix:

Underlying both types of epithelium is a tough layer of collagen.The cervix has more fibrous tissue, including collagen and elastin, than the rest of the uterus. The two types of epithelia meet the squamocolumnar junction (Pic. 4). Infection with the human papillomavirus (HPV) can cause changes in the epithelium, which can lead to cancer of the cervix. Cervical cytology tests can often detect cervical cancer and its precursors, and enable early successful treatment. 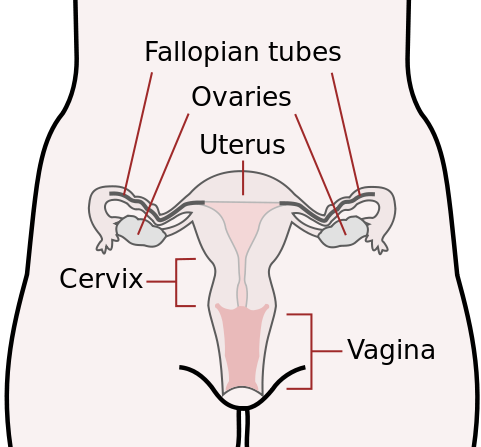 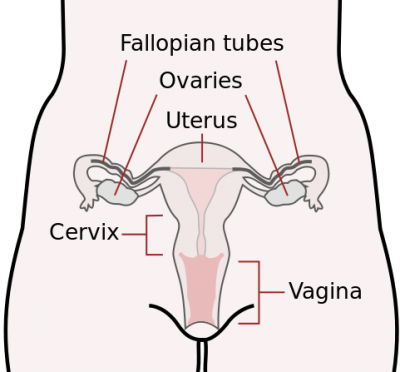 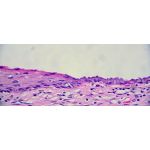 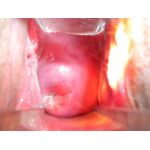 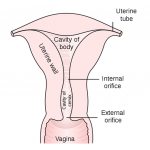