An ovarian structure with two major functions, namely, the production of hormones and growth of oocytes capable of being fertilized.

The follicle is an ovarian structure with two major functions:

Sex steroids (namely estrogens) produced by follicular cells are known to play one of the main roles in the regulation of ovarian function. These steroids present in the systemic circulation actively participate in the regulation of pituitary gonado‐ tropin secretion. On the other side, sex steroids present in the ovarian microenvironment act as factors important for the maintenance of follicular development.

2.    Growth of oocytes capable of being fertilized

Oocytes of mammals develop and reach ovulatory maturity inside the follicles. A follicle is made up by the oocyte covered by pregranulosa or granulosa cells (Pic. 1). Ovarian development in the embryo starts between 3 and 6 weeks after conception, a period in which numerous cellular events take place. Over the lengthy process of follicle development, granulosa cells proliferate and the theca layer is formed, allowing the follicle to take advantage of blood supply. Then, follicles pass through the succeeding stages of development (Pic. 2) before reaching full maturation and the ability to ovulate.

These functions are carried out by antral follicles which posses an inner wall of granulosa cells that rest on a distinct basal lamina. This specialized extracellular matrix separates the epithelial layer from the connective tissue and affects proliferation and differentiation of the granulosa cells.

At present, the oocyte is considered to play an important role in follicular organization during the processes leading to ovulation. It is assumed that the oocyte controls the proliferation of granulosa cells and later their differentiation into steroids and protein-secreting cells. On the other hand, granulosa cells are indispensable for oocyte development. When the oocyte reaches a certain size threshold, it secretes factors that inhibit the ability of granulosa cells to promote oocyte growth. This indicates that the oocyte determines not only the growth of the follicle but indirectly also its own growth.

Follicle development starts with the activation and development of quiescent primordial follicles that develop through primary, secondary, preantral and antral follicle stages before they ovulate a fertilisable oocyte, however, many follicles undergo atresia (absence of normal opening) and die.

A normal ovary consists of 8-10 follicles from 2mm to 28mm in size. The group of follicles with less than 18mm in size are called antral follicles, and the size in the range of 18-28mm are known as dominant follicles (Pic. 3). In a normal menstrual cycle with ovulation, a mature follicle, which is also a cystic structure, develops (Graafian follicle; Pic. 4). The size of a mature follicle that is ready to ovulate is about 18-28mm in diameter.

During the past 50 years, it has been accepted that folliculogenesis begins with recruitment of a group or cohort of follicles in the late luteal phase (latter phase of the menstrual cycle) of the preceding menstrual cycle followed by visible follicle growth in the next follicular phase (starts with period and ends with ovulation). The group or cohort of follicles begins growth and by the mid-follicular phase, around day 7, a single dominant follicle appears to be selected from the group for accelerated growth. The dominant follicle continues to grow at a rate of about 2mm per day. In women, a preovulatory follicle typically measures 18–28mm when a surge of luteinizing hormone (LH) is released from the pituitary to trigger ovulation; ovulation occurs approximately 36 hours after LH release.

For women undergoing assisted reproductive therapy (ART), the ovarian ultrasound imaging has become an effective tool in infertility management. Among the many causes, ovulatory failure or dysfunction is the main cause for infertility. Thus, an ovary is the most frequently ultrasound scanned organ in an infertile woman. Determination of ovarian status and follicle monitoring constitute the first step in the evaluation of an infertile woman. Infertility can also be associated with the growth of a dominant follicle beyond a preovulatory diameter and subsequent formation of a large anovulatory follicle cyst. The ovary is imaged for its morphology (normal, polycystic or multicystic), for its abnormalities (cysta, dermoids, endometriomas, tumors etc), for its follicular growth in ovulation monitoring, for evidence of ovulation and corpus luteum (temporary endocrine structure in female ovaries producing progesteorne) formation and function. Ovulation scans allow the doctor to determine accurately when the egg matures and when it ovulates. Daily scans are done to visualize the growing follicle, which looks like a black bubble on the screen of the ultrasound imaging machine (Pic. 5).

Pathological condition in follicles may include:

An ovarian cyst is simply a collection of fluid within the normal solid ovary. There are many different types of ovarian cysts, and they are an extremely common gynaecologic problem. Because of the fear of ovarian cancer, cysts are a common cause of concern among women. But, it is important to know that the vast majority of ovarian cysts are not cancer. However, some benign cysts will require treatment, in that they do not go away by themselves, and in quite rare cases, others may be cancerous.

The most common types of ovarian cysts are called functional cysts, which result from a collection of fluid forming around a developing egg. Every woman who is ovulating will form a small amount of fluid around the developing egg each month.

The combination of the egg, the special fluid-producing cells, and the fluid is called a follicle and is normally about the size of a pea. For unknown reasons, the cells that surround the egg occasionally form too much fluid, and this straw colored fluid expands the ovary from within. If the collection of fluid gets to be larger than a normal follicle, about threequarters of an inch in diameter, a follicular cyst is said to be present. If fluid continues to be formed, the ovary is stretched as if a balloon was being filled up with water. The covering of the ovary, which is normally white, becomes thin and smooth and appears as a bluish-grey. Rarely, though, follicular cysts may become as large as 3 or 4 inches.

The typical polycystic appearance is defined by the presence of 12 or more follicles measuring less than 9mm in diameter arranged peripherally around a dense core of stroma. Other ultrasound features include enlarged ovaries, increased number of follicles (Pic. 6) and density of ovarian stroma (connective tissue cells).

The current ultrasound guidelines consensus characterize the polycystic ovary as containing 12 or more follicles measuring 2–9mm. The basic difference between polycystic and normal ovaries is that, although the polycystic ovaries contain many small antral follicles with eggs in them, the follicles do not develop and mature properly, and hence, there is no ovulation.

The infertility incidence with polycystic ovaries is very high. These women usually will have difficulty in getting pregnant and, hence, invariably require treatment to improve chances for pregnancy. In a polycystic ovary, the numerous small cystic structures, also called antral follicles, give the ovaries a characteristic "polycystic" (many cysts) appearance in ultrasound image. It is referred to as polycystic ovarian syndrome (PCOS/PCOD). Since women with polycystic ovaries do not ovulate regularly, they do not get regular menstrual periods. 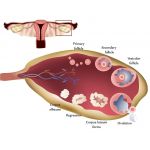 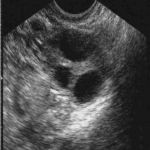 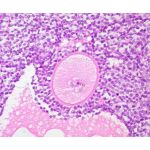 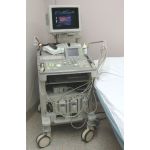 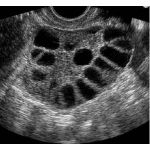