The hypothalamus acts as an endocrine organ as it synthesizes hormones and transports them along axons to the posterior pituitary gland. The hypothalamus also synthesizes and secretes regulatory hormones (statins and liberins) that control the endocrine cells in the anterior pituitary gland. In addition, it contains autonomic centers that control endocrine cells in the adrenal medulla via neuronal control. The hypothalamus is highly interconnected with other parts of the central nervous system, in particular the brainstem and its reticular formation. As part of the limbic system, it has connections to other limbic structures including the amygdala and septum, and is also connected with areas of the autonomous nervous system.

The hypothalamus coordinates many hormonal and behavioral circadian rhythms, complex patterns of neuroendocrine outputs, complex homeostatic mechanisms, and important behaviors. The hypothalamus must, therefore, respond to many different signals, some of which generated externally and some internally. Delta wave signaling arising either in the thalamus or in the cortex influences the secretion of releasing hormones; GHRH (growth hormone–releasing hormone) and prolactin are stimulated whilst TRH (thyrotropin-releasing hormone) is inhibited.

The hypothalamus is responsive to:

Via the pituitary gland it controls the following body processes:

Estrogen and progesterone can influence gene expression in particular neurons or induce changes in cell membrane potential and kinase activation, leading to diverse non-genomic cellular functions. Estrogen and progesterone bind to their cognate nuclear hormone receptors, which translocate to the cell nucleus and interact with regions of DNA known as hormone response elements (HREs) or get tethered to another transcription factor's binding site. Estrogen receptor (ER) has been shown to transactivate other transcription factors in this manner, despite the absence of an estrogen response element (ERE) in the proximal promoter region of the gene. In general, ERs and progesterone receptors (PRs) are gene activators, with increased mRNA (messenger RNA) and subsequent protein synthesis following hormone exposure.
Male and female brains differ in the distribution of estrogen receptors, and this difference is an irreversible consequence of neonatal steroid exposure. Estrogen receptors (and progesterone receptors) are found mainly in neurons in the anterior and mediobasal hypothalamus.
Development
In neonatal life, gonadal steroids influence the development of the neuroendocrine hypothalamus. For instance, they determine the ability of women to exhibit a normal reproductive cycle, and of men and women to display appropriate reproductive behaviors in adult life.
Within the brain, testosterone is aromatized to (estradiol), which is the principal active hormone for developmental influences. The human testis secretes high levels of testosterone from about week 8 of fetal life until 5–6 months after birth, a process that appears to underlie the male phenotype. Estrogen from the maternal circulation is relatively ineffective, partly because of the high circulating levels of steroid-binding proteins in pregnancy.
Anatomical structure
The hypothalamus is located below the thalamus, just above the brainstem and it forms part of the limbic system.
The hypothalamus is a relatively small area (4 cm 3) laying between the diencephalon, commissura anterior and corpora Mammillaria (Pic. 2), forming the lower part of the walls and floor of the third brain chamber. Observed from the ventral area, it is the area between (and above), chiasm opticum and corpora Mammillaria. In the middle of this area, there is a bump called tuber cinereum from which infundibulum of the pituitary gland suspended. In humans the hypothalamus is the size of an almond.
The hypothalamus is a brain structure composed of distinct nuclei and less anatomically distinct areas. It can be roughly devided to anterior (preoptic, medial, lateral), tuberal (medial, lateral), posterior (medial, latera) part.
Histological structure
In human magnocellular neurosecretory cells in the paraventricular nucleus and the supraoptic nucleus of the hypothalamus produce oxytocin and vasopressin. These hormones are released into the blood in the posterior pituitary. Much smaller parvocellular neurosecretory cells, neurons of the paraventricular nucleus, release corticotropin-releasing hormone and other hormones into the hypophyseal portal system, where these hormones diffuse to the anterior pituitary.
Images 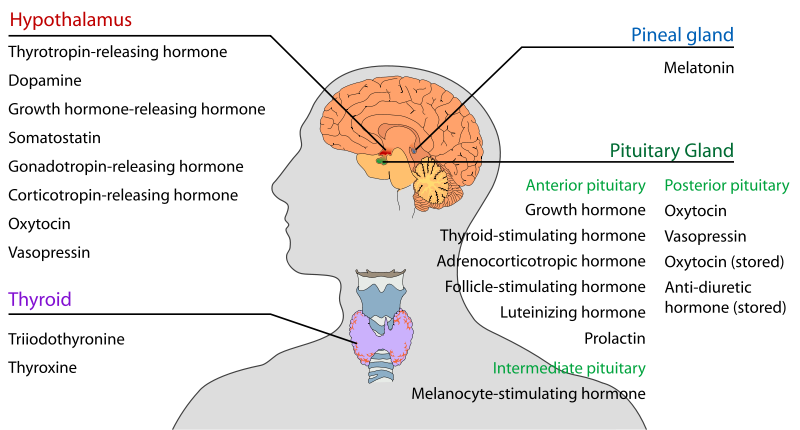 Partial or complete loss of production of one or more of the pituitary gland hormones.

A releasing hormone responsible for the release of follicle-stimulating hormone (FSH) and luteinizing hormone (LH) from the anterior pituitary. 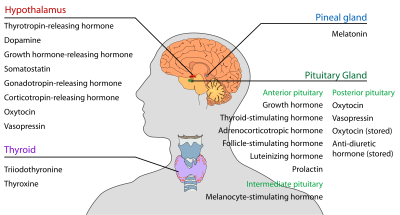 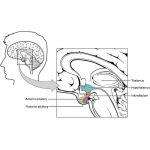