The ovaries are the site of production and periodical release of egg cells, the female gametes. In the ovaries, the developing egg cell (or oocyte) grows within the environment provided by follicles (see folliculogenesis). Follicles are composed of different types and number of cells according to the stage of their maturation and their size is indicative of the stage of oocyte development.

When the oocyte finishes its maturation in the ovary (see oogenesis), a surge of luteinizing hormone secreted by the pituitary gland stimulates the release of the oocyte through the rupture of the follicle, a process called ovulation. The follicle remains functional and reorganizes into a corpus luteum, which secretes progesterone in order to prepare the uterus for an eventual implantation of the embryo.

Secretion of testosterone and progesterone

Ovaries secrete both estrogen and progesterone. Estrogen is responsible for the appearance of secondary sex characteristics of females at puberty and for the maturation and maintenance of the reproductive organs in their mature functional state. Progesterone functions with estrogen by promoting menstrual cycle changes in the endometrium.

The first appearance of the gonad is essentially the same in the two sexes, and consists in a thickening of the mesothelial layer of the peritoneum. The thick plate of epithelium extends deeply, pushing before it the mesoderm and forming a distinct projection. This is termed the gonadal ridge. The ovary is thus formed mainly from the genital ridge and partly from the mesonephros, during the further development.

The ovaries are the female gonads. Paired ovals, they are each about 2 to 3 cm in length, about the size of an almond (Pic.1). Each one is whitish in color and located alongside the lateral wall of the uterus in a region called the ovarian fossa. The fossa usually lies beneath the external iliac artery and in front of the ureter and the internal iliac artery.

The ovaries are not attached to the fallopian tubes but to the outer layer of the uterus via the ovarian ligaments (Pic. 2). Usually each ovary takes turn releasing eggs every month; however, if there was a case where one ovary was absent or dysfunctional then the other ovary would continue providing eggs to be released.

There are two extremities to the ovary:

The ovaries comprises an outer covering of cuboidal epithelium called the

The outermost layer of the ovary called the:

The innermost layer is the:

The mature follicles developed in ovarian cortex consist of (Pic. 3): 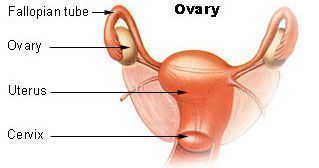 An ovarian structure with two major functions, namely, the production of hormones and growth of oocytes capable of being fertilized.

The loss of menstrual cycles for at least 6 consecutive months.

A condition of low serum levels of estrogen.

Abnormal levels of one of the gonadotropin hormones, LH and FSH.

The biological development of sex differences, changes that make a male body different from a female body. 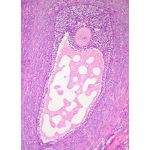 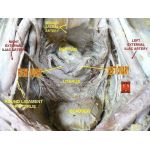