The function of the prostate is to secrete a slightly alkaline fluid, milky or white in appearance, that in humans usually constitutes roughly 30% of the volume of the semen along with spermatozoa and seminal vesicle fluid. Contains protein (human less than 1% by volume), particularly immunoglobulins, acid phosphatase, protease, and prostate-specific antigen, polyamines (spermine and spermidine), prostaglandins, citric acid and zinc. Semen is made alkaline overall with the secretions from the other contributing glands, including, at least, the seminal vesicle fluid.

The alkalinity of semen helps neutralize the acidity of the vaginal tract, prolonging the lifespan of sperm. The prostatic fluid is expelled in the first ejaculate fractions, together with most of the spermatozoa. In comparison with the few spermatozoa expelled together with mainly seminal vesicular fluid, those expelled in prostatic fluid have better motility, longer survival and better protection of the genetic material.

The prostate gland represent the modified wall of the proximal portion of the male urethra and arises by the 9th week of embryonic life in the development of the reproductive system. Condensation of mesenchyme, urethra and Wolffian ducts gives rise to the adult prostate gland, a composite organ made up of several glandular and non-glandular components tightly fused.

As shown in pictures (Pic. 1), (Pic. 2) the centrally located prostate gland sits anterior to the rectum at the base of the bladder surrounding the prostatic urethra (the portion of the urethra that runs within the prostate). About the size of a walnut, the prostate is formed of both muscular and glandular tissues. The mean weight of the normal prostate in adult males is about 11 grams, usually ranging between 7 and 16 grams. It excretes an alkaline, milky fluid to the passing seminal fluid - now called semen - that is critical to first coagulate and then decoagulate the semen following ejaculation.

The temporary thickening of semen helps retain it within the female reproductive tract, providing time for sperm to utilize the fructose provided by seminal vesicle secretions. When the semen regains its fluid state, sperm can then pass farther into the female reproductive tract. The prostate also contains some smooth muscles that help expel semen during ejaculation. The prostate normally doubles in size during puberty. At approximately age 25, it gradually begins to enlarge again. This enlargement does not usually cause problems; however, abnormal growth of the prostate, or benign prostatic hyperplasia, can cause constriction of the urethra as it passes through the middle of the prostate gland, leading to a number of lower urinary tract symptoms, such as a frequent and intense urge to urinate, a weak stream, and a sensation that the bladder has not emptied completely.

The epithelium is highly variable and areas of low cuboidal or squamous epithelium are also present, with transitional epithelium in the distal regions of the longer ducts. Within the prostate, the urethra coming from the bladder is called the prostatic urethra and merges with the two ejaculatory ducts.
Further comprising the prostate cells:
Images 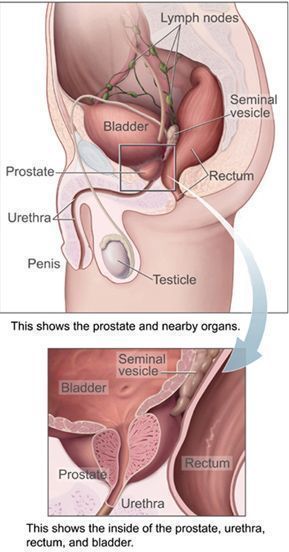 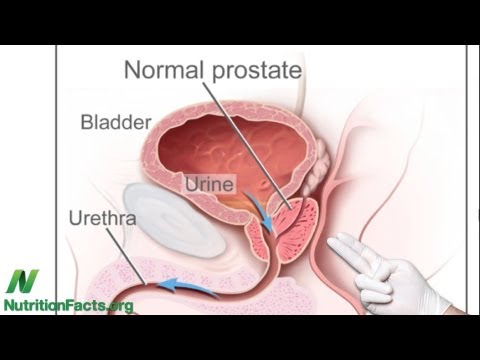 The need to urinate more often than usual and a sudden, compelling urge to urinate. 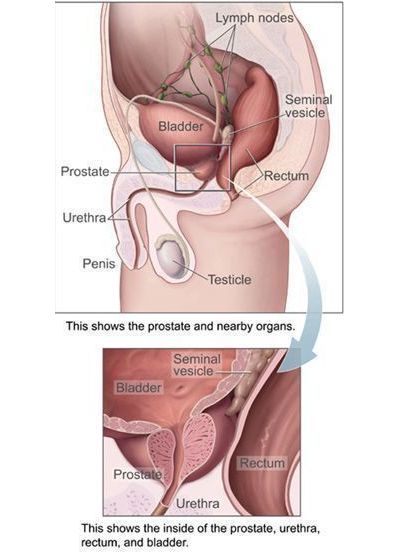 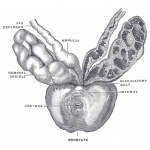 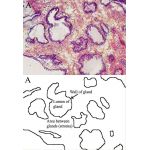