One of two simple tubular glands responsible for the production of about 60 percent of the fluid that ultimately becomes semen.

The paired seminal vesicles are glands that contribute approximately 60 percent of the semen
volume. The excretory duct of each seminal gland opens into the corresponding vas deferens as it enters the prostate gland (Pic.1). The vesicle produces a substance that causes the semen to become sticky and jelly-like after ejaculation. Lipofuscin granules from dead epithelial cells give the secretion its yellowish color. Seminal vesicle fluid is alkaline, resulting in human semen having a mildly alkaline pH. The alkalinity of semen helps neutralize the acidity of the vaginal tract, prolonging the lifespan of sperm. Acidic ejaculate (pH <7.2) may be associated with ejaculatory duct obstruction.
The thick secretions from the seminal vesicles contain proteins, enzymes, mucus, vitamin C, flavins, phosphorylcholine and prostaglandins. Seminal vesicle fluid contains large amounts of fructose, which is used by the sperm mitochondria to generate ATP as an energy source to allow movement through the female reproductive tract.

The seminal vesicles are a pair of glands that are positioned below the urinary bladder and lateral to the vas deferens (Pic.2). Each vesicle consists of a single tube folded and coiled on itself, with occasional diverticula in its wall.
The excretory duct of each seminal gland unites with the corresponding vas deferens to form the two ejaculatory ducts, which immediately pass through the substance of the prostate gland before opening separately into the verumontanum of the prostatic urethra.
Each seminal vesicle spans approximately 5 cm, though its full unfolded length is approximately 10 cm, but it is curled up inside the gland's structure.

Seminal vesicles ( Pic.3), (Pic.4), are composed of mucosa, consisting of:

The lumen of the glands is highly irregular and stores secretions from the glands of the vesicles.

The epithelia is pseudostratified columnar in character, similar to other tissues in the male reproductive system. The height of these columnar cells, and therefore activity, is dependent upon testosterone levels in the blood.

Spermatozoa may occasionally be found within the lumen of the glands, even though the vesicles are blind-ended in nature. This is thought to be because of slight reflux due to muscular contractions of the urethera during ejaculation. 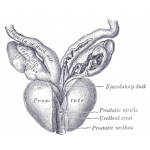 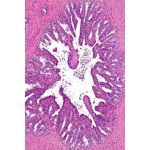 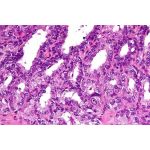