Seminiferous tubules are located within the testes, and are the specific location of meiosis, and the subsequent creation of male gametes, namely spermatozoa. As just noted, spermatogenesis occurs in the seminiferous tubules that form the bulk of each testis (Pic. 1). They are composed of developing sperm cells surrounding a lumen, the hollow center of the tubule, where formed sperm are released into the duct system of the testis (Pic. 2, Pic. 3). Specifically, from the lumens of the seminiferous tubules, sperm move into the straight tubules (or tubuli recti), and from there into a fine meshwork of tubules called the rete testes. Sperm leave the rete testes, and the testis itself, through the 15 to 20 efferent ductules that cross the tunica albuginea.

Inside the seminiferous tubules are six different cell types. These include supporting cells called sustentacular cells, as well as five types of developing sperm cells called germ cells. The epithelium of the tubule consists of sustentacular or Sertoli cells, which are tall, columnar type cells that line the tubule. In between the Sertoli cells are spermatogenic cells, which differentiate through meiosis to sperm cells. Sertoli cells function to nourish the developing sperm cells. They secrete testis-determining factor, a binding protein which increases the concentration of testosterone inside the seminiferous tubules.

Two types of degenerating seminiferous tubules were found in cryptorchid testes with Sertoli cell hyperplasia of children and adults: 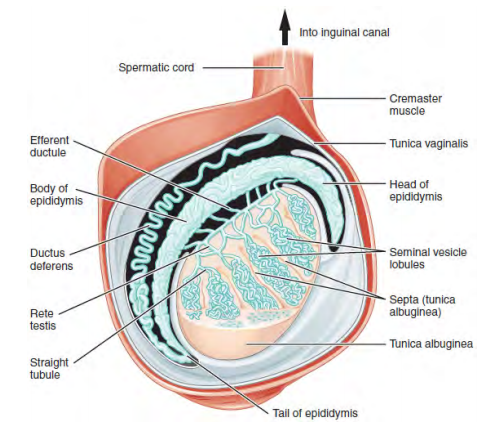 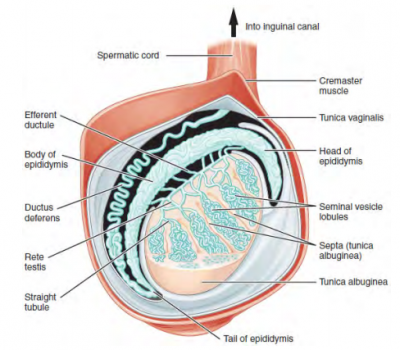 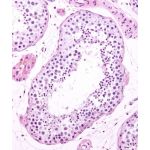 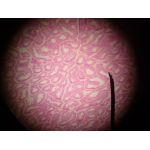