One of the largest endocrine glands in the body, controls rate of use of energy sources, protein synthesis, and body's sensitivity to other hormones.

The thyroid is an important gland involved in the metabolism, growth, development, and maintenance of the internal environment. This gland produces the hormones T3 (triiodothyronine) and T4 (thyroxine). These hormones increase the metabolic activity of the body‘s cells. Follicle cells are stimulated to release stored T3 and T4 by thyroid-stimulating hormone (TSH), which is produced by the anterior pituitary. These thyroid hormones increase the rates of mitochondrial ATP (Adenosine triphosphate) production.

Synthesis and Release of Thyroid Hormones

Hormones are produced in the colloid when atoms of the mineral iodine attach to a glycoprotein, called thyroglobulin, that is secreted into the colloid by the follicle cells. Thyroxine is produced by attaching iodine atoms to the ring structures of this protein's tyrosine residues; thyroxine (T4) contains four iodine atoms, while triiodothyronine (T3), otherwise identical to T4, has one less iodine atom per molecule. The effects of T4 in vivo are mediated via T3 (T4 is converted to T3 in target tissues). T3 is 3- to 5- fold more active than T4.

Functions of Thyroid Hormones
The thyroid hormones, T3 and T4, are often referred to as metabolic hormones because their levels influence the body’s basal metabolic rate, the amount of energy used by the body at rest. When T3 and T4 bind to intracellular receptors located on the mitochondria, they cause an increase in nutrient breakdown and the use of oxygen to produce ATP. In addition, T3 and T4 initiate the transcription of genes involved in glucose oxidation. Although these mechanisms prompt cells to produce more ATP, the process is inefficient, and an abnormally increased level of heat is released as a byproduct of these reactions. This so-called calorigenic effect (calor- = “heat”) raises body temperature.

Adequate levels of thyroid hormones are also required for protein synthesis and for fetal and childhood tissue development and growth. They are especially critical for normal development of the nervous system both in utero and in early childhood, and they continue to support neurological function in adults. These thyroid hormones have a complex interrelationship with reproductive hormones, and deficiencies can influence libido, fertility, and other aspects of reproductive function. Finally, thyroid hormones increase the body’s sensitivity to catecholamines (epinephrine and norepinephrine) from the adrenal medulla by upregulation of receptors in the blood vessels. When levels of T3 and T4 hormones are excessive, this effect accelerates the heart rate, strengthens the heartbeat, and increases blood pressure. Because thyroid hormones regulate metabolism, heat production, protein synthesis, and many other body functions, thyroid disorders can have severe and widespread consequences.

Calcitonin
The thyroid gland also secretes a hormone called calcitonin that is produced by the parafollicular cells (also called C cells) that stud the tissue between distinct follicles. Calcitonin is released in response to a rise in blood calcium levels.

It appears have a function in decreasing blood calcium concentrations by:

However, these functions are usually not significant in maintaining calcium homeostasis, so the importance of calcitonin is not entirely understood.

Development:
In the embryo, at 3–4 weeks of gestation, the thyroid gland appears as an epithelial proliferation in the floor of the pharynx at the base of the tongue between the tuberculum impar and the copula linguae at a point later indicated by the foramen cecum. The thyroid then descends in front of the pharyngeal gut as a bilobed diverticulum through the thyroglossal duct. Over the next few weeks, it migrates to the base of the neck, passing anterior to the hyoid bone. During migration, the thyroid remains connected to the tongue by a narrow canal, the thyroglossal duct.

The thyroid gland as present on the human trachea, here with a visible pyramidal lobe (or Lalouette's pyramid) (Pic. 3). The thyroid gland is a butterfly-shaped organ and is composed of two cone-like lobes or wings:

Each lobe is about 5 cm long, 3 cm wide and 2 cm thick. The organ is situated on the anterior side of the neck, lying against and around the larynx and trachea, reaching posteriorly the oesophagus and carotid sheath.
It starts :

A third lobe present called the pyramidal lobe of the thyroid gland. It is of conical shape and extends from the upper part of the isthmus, up across the thyroid cartilage to the hyoid bone (Pic. 4). The pyramidal lobe is a remnant of the fetal thyroid stalk, or thyroglossal duct. It is occasionally quite detached, or may be divided into two or more parts.

The thyroid gland is covered by a thin fibrous sheath, the capsula glandulae thyreoideae, composed of an internal and external layer:

The thyroid gland's firm attachment to the underlying trachea is the reason behind its movement with swallowing. In variable extent, the pyramidal lobe is present at the most anterior side of the lobe. In this region, the recurrent laryngeal nerve and the inferior thyroid artery pass next to or in the ligament and tubercle.

Between the two layers of the capsule and on the posterior side of the lobes, there are on each side two parathyroid glands.

The thyroid isthmus is variable in presence and size, can change shape and size, and can encompass the pyramidal lobe (lobus or processus pyramidalis). The thyroid is one of the larger endocrine glands, weighing 2-3 grams in neonates and 18-60 grams in adults, and is increased in pregnancy. In a healthy person the gland is not visible yet can be palpated as a soft mass. Examination of the thyroid gland includes the search for abnormal masses and the assessment of overall thyroid size.

At the microscopic level, there are three primary features of the thyroid (Pic. 5): follicles, follicular cells and endothelial cells.

The thyroid is composed of spherical follicles that selectively absorb iodine (as iodide ions, I–) from the blood for production of thyroid hormones, and also for storage of iodine in thyroglobulin. Twenty-five percent of the body's iodide ions are in the thyroid gland. Inside the follicles, in a region called the follicular lumen, colloid serves as a reservoir of materials for thyroid hormone production and, to a lesser extent, acts as a reservoir for the hormones themselves. Colloid is rich in a protein called thyroglobulin.

Scattered among follicular cells and in spaces between the spherical follicles are another type of thyroid cell, parafollicular cells (also called "C cells"), which secrete calcitonin. 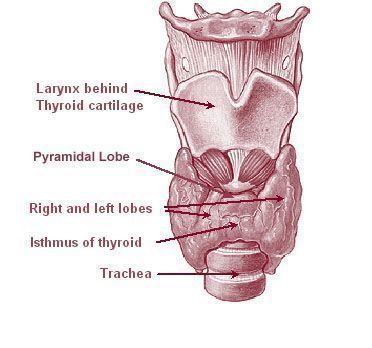 The condition where the testicles are abnormally enlarged. 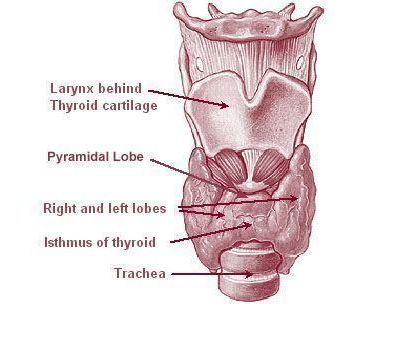 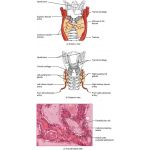 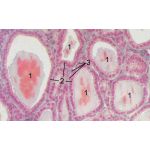 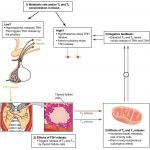 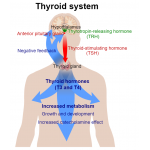