In general, in organisms that reproduce sexually, an embryo develops from a zygote, the single cell resulting from the fertilization of the female egg cell by the male sperm cell. The zygote possesses half the DNA of each of its two parents. In humans, a pregnancy is generally considered to be in the embryonic stage of development between the fifth and the eleventh weeks after fertilization, and is considered a fetus from the twelfth week on.

Classification into developmental stages is necessary to accurately describe prenatal growth. Developmental scheme of human embryos, commonly known as the Carnegie stages, a staging scheme which remains widely used today. In embryology, Carnegie stages are a standardized system of 23 stages used to provide a unified developmental chronology of the vertebrate embryo (Pic.1):

1 day after fertilization: Fertilized ovum - Carnegie stage 1: The oocyte is 120-150 m in diameter and is surrounded by the zona pellucida. The second maturation division of the oocyte completes as the sperm penetrates the egg (fertilization). The sperm head and the nucleus of the oocyte then swell to form the male and female pronuclei, respectively. Once they unite, the resultant diploid cell is called the zygote. The first mitotic division soon begins.

1.5-3 days after fertilization: Cleavage - Carnegie stage 2: The conceptus is composed of two to 16 cells but has no blastocystic cavity yet and the zona pellucida can still be easily recognized. The size of the embryo is 0.1-0.2 mm in diameter. The cell division at this stage is called cleavage since furrows (clefts) appear as the cytoplasm divides. The daughter cells are called blastomeres. An embryo with 16-32 cells is called a morula.

4 days after fertilization: Free blastocyst - Carnegie stage 3: Cell division continues after the 32 cell stage occurring more rapidly at the surface and slower in the center cells. This and directional fluid transfer leads to a cavity, the blastocoel, in the conceptus. The surface cells form an outer squamous trophoblast layer linked by both tight and gap junctions. The larger inner cells form the inner cell mass or embryoblast.

5-6 days after fertilization: Attaching blastocyst - Carnegie stage 4: This stage is characterized by the attached blastocyst, which corresponds to the onset of implantation. Attachment of the embryo occurs only once the endometrium has entered the secretory phase. At the site of attachment, the trophoblast cells are transformed into a syncytium and penetrate into the endometrial epithelium.

7–12 days after fertilization: Implanted but previllous - Carnegie stage 5: This stage was originally divided into three (a, b, and c) substages based on trophoblast differentiation status before outgrowth (villi) appears. 5a is the initial solid trophoblast cell layer; 5b, lacunar trophoblast with the appearance of spaces (lacunae) within the trophoblast layer; 5c, maternal blood-filled lacuna as capillaries and uterine glands are opened into the trophoblast spaces.

13 days after fertilization: Chorionic villi and primitive streak - Carnegie stage 6: Chorionic villi appear and begin to branch. Trophoblastic lacunae coalesce to form the intervillous space (6a). The extra-embryonic mesoderm arises and the chorionic cavity is formed. The yolk sac is now called the secondary (definitive) yolk sac. The primitive streak appears later during this stage.

16 days after fertilization: Notochordal process - Carnegie stage 7: The embryonic disc establishes axes and has an initial central primitive node (Hensen’s node, primitive pit) with the primitive streak extending caudally to the disc edge where the connecting stalk will later form. Gastrulation occurs here forming endoderm and mesoderm that spread laterally and rostrally from the primitive streak. Above the primitive node, cranially, the notochordal process develops in the mesodermal layer. The length of this process increases from 0.03 to about 0.3 mm. The embryonic disc increases in size and the amniotic cavity enlarges over the yolk sac.

20 days after fertilization: 1-3 pairs of somites -  Carnegie stage 9: The mesoderm either side of the notochord now segments into paired somites. Segmentation of paraxial mesoderm only occurs at the level of the trunk, not the head, and proceeds in a cranial-caudal direction. Note that the sequential appearance of somite pairs can also be used as a criterion to stage the embryo. The embryonic disc resembles a shoe-sole, with the broad neural plate in the ectoderm layer positioned in the cranial region. The mid-line neural plate begins to fold forming a neural groove.

24 days after fertilization: Anterior neuropore closes - Carnegie stage 11: The human embryo now has 13-20 pairs of somites. The anterior neuropore is now closing up. Optic evagination is produced at the optic sulcus and the optic ventricle is continuous with that of the forebrain. The sinus venosus develops in the cardiac loop. The (buccopharyngeal) membrane is ruptured. The otic vesicle is now formed.

28 days after fertilization: Posterior (caudal) neuropore closes, 3-4 branchial arches, upper limb buds - Carnegie stage 12: Somitogenesis continues with 21–29 somite pairs. The posterior (caudal) neuropore is starting to close or is closed. Three of the pharyngeal arches are now clearly visible. The upper limb buds appear, initially as lateral swellings at the level of the heart. Internally, the heart interventricular septum has begun to form, the liver is present and the lung buds appear.

32 days after fertilization: Four limb buds, optic vesicle - Carnegie stage 13: Two upper and two lower limb buds are visible. The optic vesicle can be easily recognized and the lens placode begins to differentiate. The embryo now has more than 30 pairs of somites, but the number of somites becomes increasingly difficult to determine and is no longer used in staging.

34 days after fertilization: Lens pit and optic cup - Carnegie stage 14: The upper limb buds elongate and become tapering. Upper limb bud features appear about 2 days before the lower limb. The embryo cephalic and cervical flexures are prominent. Within the head, the future cerebral hemispheres and cerebellar plates are visible. On the head surface, the lens pit invaginates into the optic cup but is not yet closed and the otic vesicle endolymphatic appendage emerges. Within the trunk, pancreatic buds (ventral and dorsal) are present, the mesonephric duct forms the ureteric bud and at its tip is the metanephrogenic blastemal cap.

34 days after fertilization: Lens vesicles, nasal pit and hand plates - Carnegie stage 15: The upper limb hand plates are now visible. Lens vesicles are closed and covered by the surface ectoderm. The nasal plate invaginates to form a nasal pit. The auricular hillocks on pharyngeal arch 1 and 2 appear. Within the heart, the foramen secundum is present. Lung buds are now branched into lobar buds and the primary urogenital sinus is formed.

38 days after fertilization: Nasal pit faces ventrally, retinal pigment, foot plate - Carnegie stage 16: The upper limb hand plates are distinct and the foot plate has begun to form. On the trunk between the upper and lower limbs, a distinct mesonephric ridge is visible. On the head, the nasal pits deepen and face ventrally and the eye retinal pigment is visible externally. The nasolacrimal groove begins to form and lies between the frontal and maxillary processes.

40 days after fertilization: Head relatively larger, nasofrontal groove, finger rays - Carnegie stage 17: The upper limb hand plates have digital rays, and the foot has acquired a rounded digital plate. The head is now larger than previously and the trunk has begun to straighten. On the first and second pharyngeal arches the auricular hillocks are present and the nasolacrimal grooves are distinct.

42 days after fertilization: Elbows, toe rays, eyelid folds, nipples - Carnegie stage 18: The body shape is more cuboidal. Both cervical and lumbar flexures are denoted. The elbows are discernible and interdigital notches appear in the hand plates. Toe rays are observed in the foot plate. Eyelid folds appear. Auricular hillocks are being transformed into specific parts of the external ear. Ossification may begin in some skeletal structures.

44 days after fertilization: Trunk elongation and straightening - Carnegie stage 19: The trunk begins to elongate and straightens. Eyes and external ears gain definite shape. The eyes are positioned in the front of the face, owing to the growth of the brain. The upper and lower limbs are almost parallel, with pre-axial borders cranially and postaxial borders caudally. Intestines have developed and parts of them can be observed in normal umbilical cord (physiological umbilical hernia).

46 days after fertilization: Longer upper limb bent at elbow - Carnegie stage 20: The upper limbs have increased in length and flexed at the elbows and hand joints. Fingers are curving slightly over the chest. The angle of cervical flexure becomes small, and the direction of the head goes upward. The head has a superficial scalp vascular plexus. The herniated intestines continue to elongate. Embryo spontaneous movements can occur at this stage.

48 days after fertilization: Fingers longer, hands approach each other - Carnegie stage 21: The hands are slightly flexed at the wrists and nearly come together over the cardiac prominence. The head becomes round and the superficial vascular plexus has spread and now surrounds the head. The trunk tail now becomes rudimentary.

50 days after fertilization: Eyelids and external ear more developed - Carnegie stage 22: The vascular plexus of the head becomes distinct. The eyelids are thickening and encroaching into the eyes. The tragus and antitragus of the external ear are assuming a more definite form. The position of the external ears becomes higher on the head. The tail has almost disappeared.

52 days after fertilization: End of embryonic period - Carnegie stage 23: The head is now rounded out and the trunk has elongated to a more mature shape. The limbs have increased in length and the forearm is level or above the level of the shoulder. The head scalp vascular plexus is approaching the vertex of the head. The eyelids and ear auricles become definite. The external genitalia are developed but not sex-differentiated. The trunk tail has now gone. 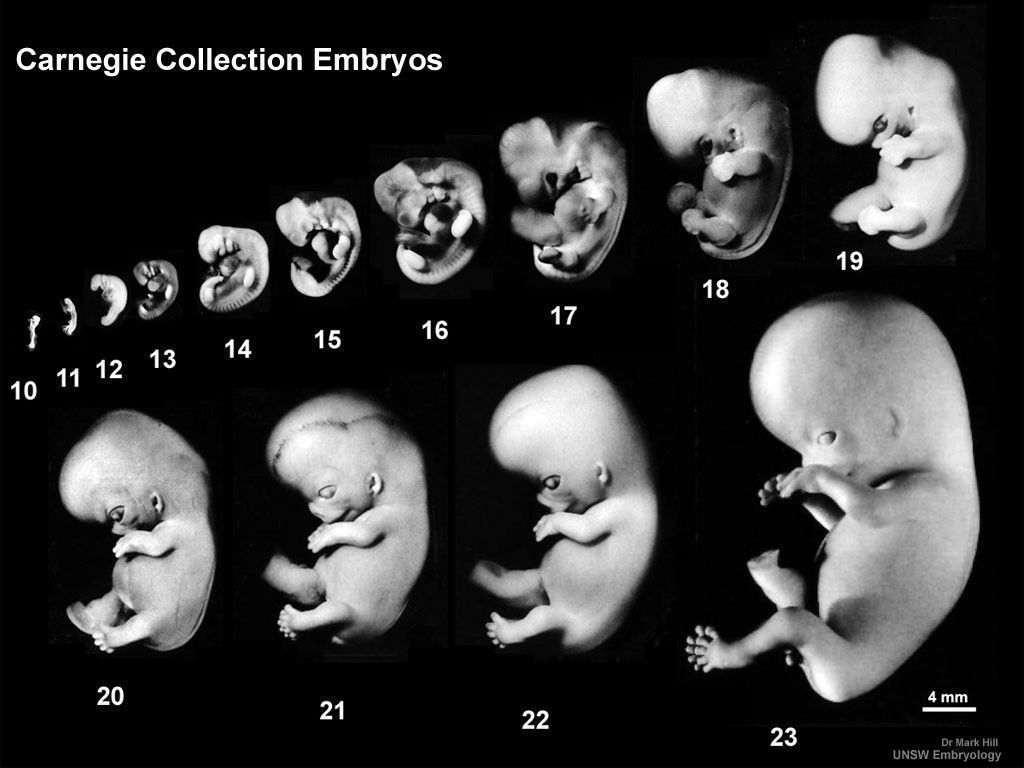 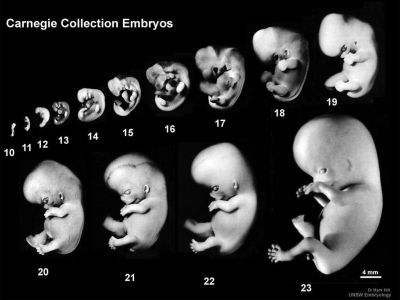 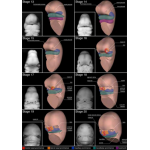