The endometrium is the only tissue where a fertilized oocyte implantation and consequent development can happen, so it has utmost importance for the human reproduction. During pregnancy, the glands and blood vessels of endometrium provides nutrients and other necessary substances for an embryo to continue its development. Later some part of endometrial epithelium, called decidua, forms the placenta together with the outer layer (trophoblast) of an early embryo (blastocyst). The endometrium has also a structural function, since it prevents the adhesion of opposed walls of the myometrium (Pic. 1) so the lumen of a uterus does not collapse.

Structurally, the endometrium consists of two layers: the stratum basalis and the stratum functionalis (the basal and functional layers).

The stratum basalis layer is the deepest tissue of endometrium and is adjacent to the myometrium. It is the constant layer of endometrium, that does not undergo conformational changes during the uterine cycle and its purpose is to replace the tissue loss during the menstruation.

On the other part, the thicker stratum functionalis (Pic. 2), is the layer that provides actual proper site for implantation of the fertilized egg, and if the fertilization should not occur, it is only the stratum functionalis layer that sheds during menstruation. This superficial layer of endometrium contains the stroma, glandules and the epitelial tissue that lines the uterine lumen.

The epithelial tissue is formed by a single layer of columnar ephitelium and it rests on the endometrial stroma where simple tubular uterine glandules can be found. The stroma is supplied by blood through spiral arteries, that develop during secretory phase under the influence of progesterone. They are derived from uterine arteries and they regress under the influence of prostaglandins if the pregnancy does not occur.

The epithelial tissue of endometrium goes through a cyclic regeneration. The endometrium initially proliferates under the influence of estrogen. That’s called the proliferative phase. The end of the proliferative phase is induced by changes in the sex hormones production and concentration and its end is marked by ovulation. The next phase of uterine cycle is called the secretory phase, which is characterized by the preparation of the endometrium for the implantation of an embryo. This means that the glands of endometrium become more active in production of specific nutritive fluids. If the pregnancy does not occur within approximately 10 to 12 days, the corpus luteum will degrade into the corpus albicans. As the consequence the levels of both estrogen and progesterone will fall, the endometrium will grow thinner, a menstruation will happen so new menstrual cycle will start. In humans, the uterine cycle lasts an average of 28 days.

Once menstrual flow ceases, the endometrium begins to proliferate again, marking the beginning of the proliferative phase of the menstrual cycle. It occurs when the granulosa and theca cells of the tertiary follicles and later the dominant (antral) follicle begin to produce increased amounts of estrogen. These rising of estrogen concentrations stimulate the stratum functionalis (epithelial tissue or endometrial lining) to rebuild. In the late proliferative phase, the ovulation of antral follicle is triggered under the influence of the luteinizing hormone (LH) surge. In a typical 28-day menstrual cycle, ovulation occurs on day 14 and it marks the end of proliferative phase.

In the ovary, the luteinization of the granulosa cells of the collapsed follicle forms the progesterone-producing corpus luteum, marking the beginning of the luteal phase of the ovarian cycle. In the uterus, the progesterone begins the secretory phase of the menstrual cycle, in which the stratum functionalis prepares for implantation. Over the next 10 to 12 days, the endometrial glands secrete a fluid rich in glycogen. If fertilization has occurred, this fluid will nourish the ball of cells now developing from the zygote. At the same time, the spiral arteries develop to provide blood to the thickened stratum functionalis. If no pregnancy occurs within approximately 10 to 12 days, the corpus luteum will degrade into the corpus albicans. As consequence, levels of both estrogen and progesterone will fall, and the endometrium will grow thinner. Prostaglandins will be secreted that cause constriction of the spiral arteries, reducing oxygen supply. The endometrial tissue will die, resulting in menses. 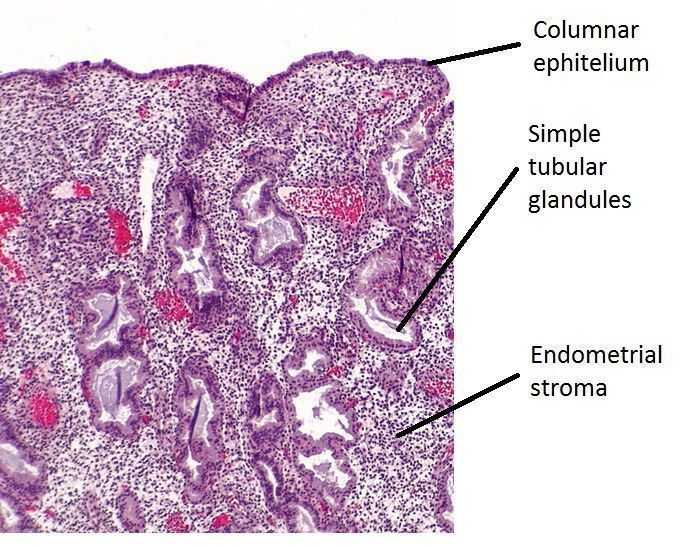 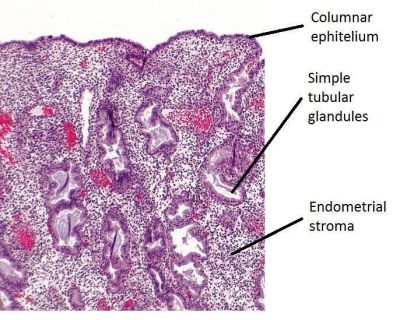 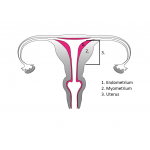