The ability of a male to produce sperm cell is a basic condition for concievieng an offspring. The development of male gametes starts after birth at the seminiferous tubules, when a basal reservoir of male germ cell is created. These reserve male germ cells are called spermatogonia (sg.: spermatogonium). They represent the foundation of sperm cell production in the testis by balancing self-renewal and differentiation activity. When a man reaches the age of puberty, spermatogonia resume their division and start the process of spermatogenesis. Spermatogonia also replicate themselves to maintain their counts to supply the spermatogenesis during whole life of a man.

Spermatogonia are the least mature cells in the process of spermatogenesis and can be found connected to Sertoli cells at the basement membrane of a seminiferous tubule (Pic. 1). Spermatogonia are diploid cells meaning that they contain full copy of man’s genetic information. Complete genetic information of any human is represented by 46 chromosomes, cell with 46 chromozomes are referred as diploid cells (2n). When spermatogonia resume mitotic division, the result is the gain of two identical diploid cells. One of these cells remains a spermatogonium, and the other one becomes a primary spermatocyte. Based upon a specific destiny of each spermatogonium (Pic. 2), there can be found 3 types.

Undifferentiated spermatogonia can be also referred as unipotent spermatogonial stem cells (SSCs) due to some very specific qualities they possess. In particular, type A spermatogonia possess some special aspects of great medical importance in solving male cancer-induced infertility. When type A spermatogonia are transplanted into the seminiferous tubules of an infertile male, they can establish donor-derived spermatogenesis and produce sperm cells that transmit the donor haplotype to progeny. Additionally, when they are cultured in appropriate conditions, they can acquire pluripotency and differentiate into derivatives of the three embryonic germ layers. 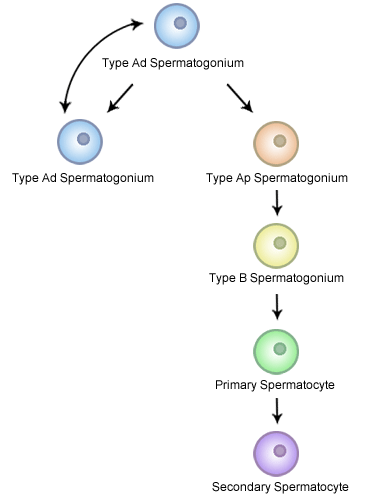 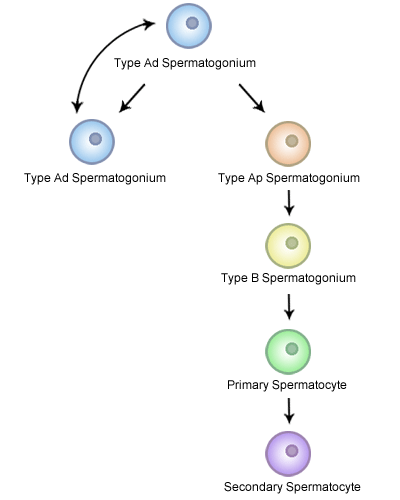 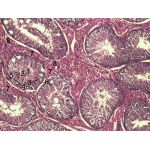