In multicellular organisms, the zygote is the earliest developmental stage. The zygote's genome is a combination of the DNA in each gamete, and contains all of the genetic information necessary to form a new individual.

In human fertilization, two 1n haploid cells - an ovum (female gamete) and a sperm cell (male gamete) - combine to form a single 2n diploid cell called the zygote. DNA is then replicated in the two separate pronuclei derived from the sperm and ovum, making the zygote's chromosome number temporarily 4n diploid. After approximately 30 hours, fusion of the pronuclei and subsequent mitotic division produce two 2n diploid daughter cells called blastomeres. Between the stages of fertilization and implantation, the developing human is called the preimplantation conceptus or the proembryo. After fertilization, the conceptus travels down the oviduct towards the uterus while continuing to divide mitotically without actually increasing in size, in a process called cleavage (Pic.1).

The developing embryo must implant into the wall of the uterus within seven days or it will deteriorate and die. The outer layers of the zygote (blastocyst) grow into the endometrium by digesting the endometrial cells. Wound healing of the endometrium closes up the blastocyst into the tissue. Another layer of the blastocyst, the chorion, begins releasing a hormone called human chorionic gonadotropin (hCG) which makes its way to the corpus luteum, keeping it active. This ensures adequate levels of progesterone that will maintain the endometrium of the uterus for the support of the developing embryo. Pregnancy tests determine the level of hCG in urine or serum: if the hormone is present, the test is positive.

Most of the time, a woman releases a single egg during an ovulation cycle. However, in approximately 1 percent of ovulation cycles, two eggs are released and both are fertilized. Two zygotes form, implant, and develop, resulting in the birth of dizygotic (or fraternal) twins. Because dizygotic twins develop from two eggs fertilized by two sperm, they are no more identical than siblings born at different times.

Much less commonly, a zygote can divide into two separate offspring during early development. This results in the birth of monozygotic (or identical) twins. Although the zygote can split as early as the two-cell stage, splitting occurs most commonly during the early blastocyst stage, with roughly 70–100 cells present. These two scenarios are distinct from each other, in that the twin embryos that separated at the two-cell stage will have individual placentas, whereas twin embryos that form from separation at the blastocyst stage will share a placenta and a chorionic cavity. 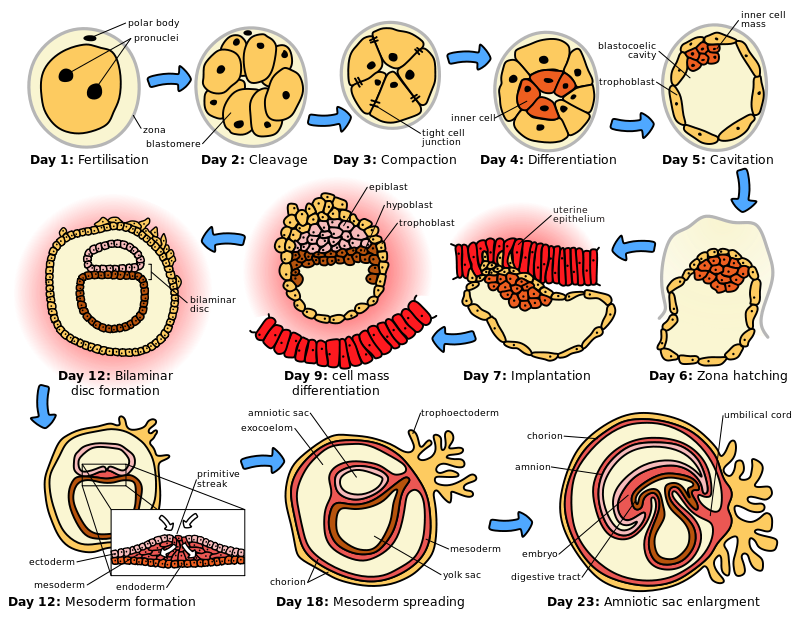 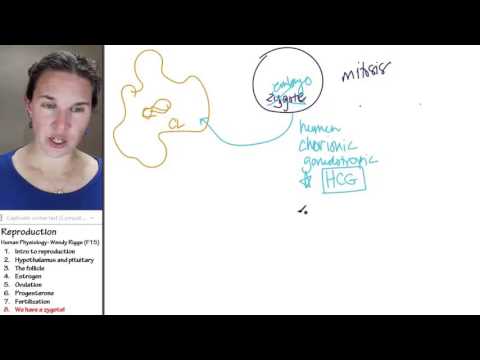 The process by which the embryo forms and develops. 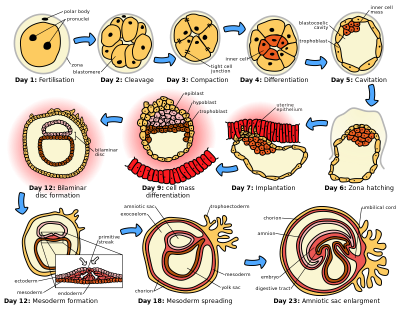