The mature male gamet present in female genital tract after ejaculation still does not possess the motility and real fertilizing ability required to fuse with an egg cell. The fully fertilizing ability of male gamet is only reached after undergoing a progressive process named capacitation. Sperm reaching the oocyte before capacitation won’t be able to penetrate the oocyte’s thick outer layer of cells (zona pellucida). The process of capacitation goes on while the sperm cell realizes its journey through the female genital tract. The female genital tract itself takes an important part in the capacitation process by secreting specific chemical substances: albumin, lipoproteins, proteolytic, glycosidasic enzymes and others). These chemical substances help the induction of capacitation. The process of capacitation can be characterized by the structural and functional changes in the sperm cell. Such changes involve membrane modification, protein modification (through phosphorylation) and modulation of enzymatic activity. Above mentioned changes are only partially known at a molecular level but most of them require an adequate supply of energy. For this reason, sperm cells also modify their metabolism in order to adequately sustain capacitation and the closely related phenomenon of sperm hyperactivation.

Albumin, the major protein present in the female reproductive secretion, has the leading role in the structural membrane modification. Albumin possess the ability to drain sterols (mainly cholesterol) from plasma membrane. The loss of cholesterol destabilizes the sperm plasma membrane. This way the membrane becomes more permeable allowing easier Ca2+ transportation into the sperm cell (Pic. 1). The destabilization of sperm cell membrane also increases its capacity to fuse with an egg. In another words the membrane of sperm cell becomes to be fusogenic. This quality is essential in the very beginning of the fertilization when the acrosomal reaction happens.

One way of changing the protein activity is through the phosphorylation of tyrosin residues. This kind of change affects for example proteins involved in signal transduction through plasma membrane. Another important part of sperm cell, where the protein phosphorylation takes place, is the flagellum. Flagellum is responsible for the progressive movement of the sperm cell. The phosphorylation of proteins in flagellum is associated with the process of hyperactivation resulting in increased movement activity of flagellum. The hyperactivation process is thought to be necessary for spermatozoa to penetrate the cumulus complex surrounding the ovulated egg, bind to the zona-intact egg, and undergo the acrosomal reaction.

The modulation of enzymatic activity is the result of above mentioned increased permeability of plasma membrane for the Ca+2 ions, which are important signal molecules in eukaryotic cells. Calcium is effecting the sperm capacitation through Ca2+-binding proteins that undergo conformational changes upon interaction with Ca2+ ion. This interaction plays an important role in several cell signalling pathways by modulating biological activities of multiple enzymes and ion pumps (including Ca2+/calmodulin-dependent kinases). Another way of modulating the enzymatic activity is through the transmembrane movement of HCO-3 anions into sperm cells, that may be responsible for the increased pH inside the sperm cell during the process of capacitation. HCO-3 is also stimulating adenylyl cyclase, the sperm enzyme responsible for raising the levels of cAMP by increased synthesis. The primary target of cAMP is protein kinase A (PKA), an enzyme that is stimulated in capacitating/capacitated sperm cells. 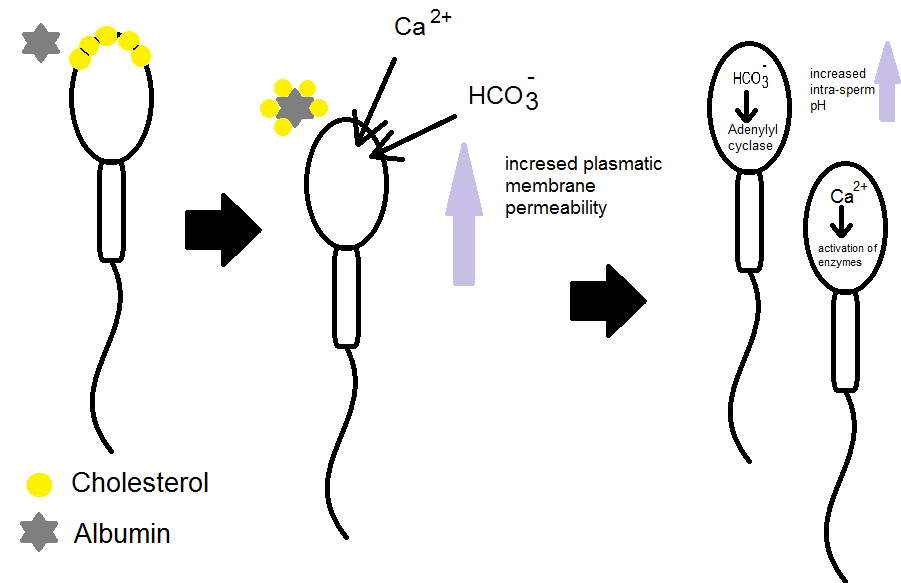 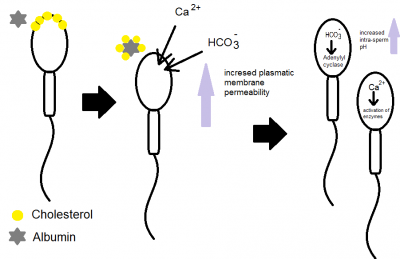