Discharge of the semen (usually containing sperm) from the male reproductory tract, normally accompanied by orgasm.

Ejaculation is the final stage and natural objective of male sexual stimulation, and an essential component of natural conception. During ejaculation, sperm exit the epididymis through the ductus deferens, a duct in the spermatic cord that leaves the scrotum. The ampulla of the ductus deferens meets the seminal vesicle, a gland that contributes fructose and proteins, at the ejaculatory duct. The fluid continues through the prostatic urethra, where secretions from the prostate are added to form semen. These secretions help the sperm to travel through the urethra and into the female reproductive tract. Secretions from the bulbourethral glands protect sperm and cleanse and lubricate the penile (spongy) urethra. The typical orgasm consists of 10 to 15 contractions, although the man is unlikely to be consciously aware of that many. Once the first contraction has taken place, ejaculation will continue to completion as an involuntary process. At this stage, ejaculation cannot be stopped. The rate of contractions gradually slows during the orgasm. Ejaculation begins during the first or second contraction of orgasm. For most men the first spurt occurs during the second contraction. The first or second spurt is typically the largest and can contain 40 percent or more of the total ejaculate volume. After this peak the flow of each pulse diminishes. The force and amount of semen that will be ejected during an ejaculation will vary widely between men and may contain between 0.1 and 10 milliliters. Adult semen volume is affected by the time that has passed since the previous ejaculation; larger semen volumes are seen with greater durations of abstinence. The duration of the stimulation leading up to the ejaculation can affect the volume.

After orgasm and ejaculation, men usually experience a refractory period characterized by loss of erection, a subsidence in any sex flush, less interest in sex, and a feeling of relaxation that can be attributed to the neurohormones oxytocin and prolactin. The intensity and duration of the refractory period can be very short in a highly aroused young man in a highly-arousing situation, perhaps without even a noticeable loss of erection. It can be as long as a few hours or days in mid-life and older men.

Control from the central nervous system

In the neurologically intact man, ejaculation is the result of coordination between psychological and physical sexual stimulation. The ejaculatory reflex is coordinated by the spinal cord and depends on thoracolumbar sympathetic fibers from segments T10-L2 and somatic fibers from segments S2-S4. This reflex receives its somatic input primarily from the dorsal nerve of the penis, which is activated by the stimulation of the glans penis. Neurons in the cortex, thalamus, hypothalamus, midbrain, and pons, all play a role in ejaculation; however, their exact functions are poorly understood.

Delayed ejaculation is a man's inability for or persistent difficulty in achieving orgasm, despite typical sexual desire and sexual stimulation. Generally, a man can reach orgasm within a few minutes of active thrusting during sexual intercourse, whereas a man with delayed ejaculation either does not have orgasms at all or cannot have an orgasm until after prolonged intercourse which might last for 30–45 minutes or more. In most cases delayed ejaculation presents the condition in which the man can climax and ejaculate only during masturbation, but not during sexual intercourse.
Anejaculation is the condition of being unable to ejaculate. It can depend on one or more of several causes, including: sexual inhibition, pharmacological inhibition, autonomic nervous system malfunction, prostatectomy, ejaculatory duct obstruction, spinal cord and old age.

Retrograde ejaculation occurs when semen, which would, in most cases, be ejaculated via the urethra, is redirected to the urinary bladder. Normally, the sphincter of the bladder contracts before ejaculation forcing the semen to exit via the urethra, the path of least resistance. When the bladder sphincter does not function properly, retrograde ejaculation may occur. It can also be induced deliberately by a male as a primitive form of male birth control (known as coitus saxonicus) or as part of certain alternative medicine practices. 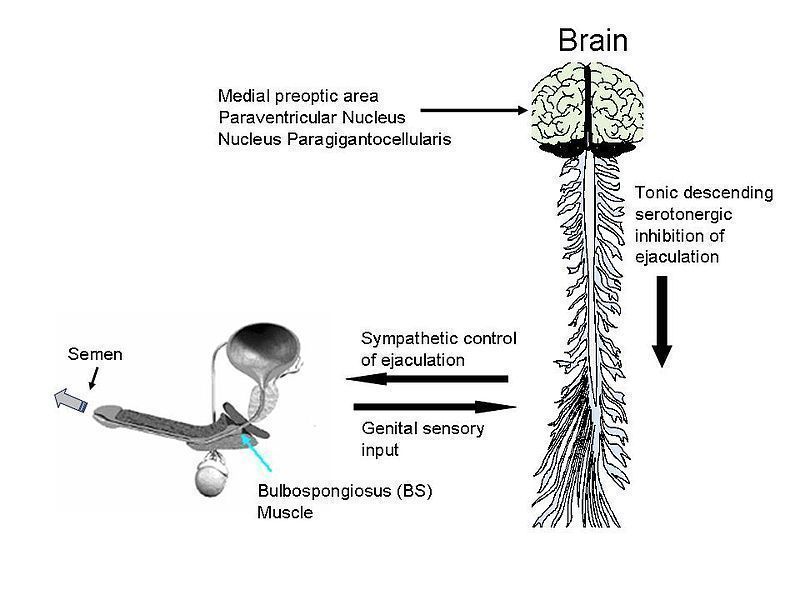 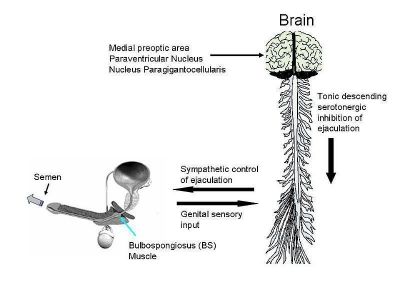 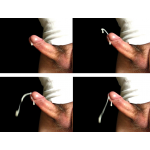