The process by which the embryo forms and develops.

The zygote contains the combined genetic material carried by both the male and female gametes which consists of the 23 chromosomes from the oocyte and the 23 chromosomes from the sperm. The 46 chromosomes undergo changes prior to the mitotic division which leads to the formation of the two cells embryo. Embryogenesis covers the first eight weeks of development and at the beginning of the ninth week the embryo is termed a fetus.
Following fertilization, the zygote and its associated membranes, together referred to as the conceptus, continue to be projected toward the uterus by peristalsis and beating cilia. During its journey to the uterus, the zygote undergoes five or six rapid mitotic cell divisions. Although each cleavage results in more cells, it does not increase the total volume of the conceptus. Each daughter cell produced by cleavage is called a blastomere (Pic. 1).
Approximately 3 days after fertilization, a 16-cell conceptus reaches the uterus. The undifferentiated spherical cells that had been loosely grouped are now compacted and look more like a solid mass. This structure is called morula. As cell division continues, the blastomeres change their shape and tightly align themselves against each other. This is called compaction of morula and is likely mediated by cell surface adhesion glycoproteins.

The blastocyst possesses an inner cell mass (ICM), called embryoblast, which subsequently forms the embryo itself, and an outer layer of cells, called trophoblast, which later combines with the maternal endometrium and forms the placenta. Placenta is the organ of nutrient, waste and gas exchange between mother and the developing baby (Pic. 2). The trophoblast surrounds the embryoblast and a fluid-filled blastocyst cavity known as the blastocoel or the blastocystic cavity. The human blastocyst contains 70-100 cells. The embryoblast is the source of embryonic stem cells and is essential for later structures of the adult organism.
In a process called “hatching,” the conceptus breaks free of the zona pellucida in preparation for implantation. During the second week of development, with the embryo implanted (see Implantation) in the uterus, cells within the blastocyst start to organize into layers.

The formation of the hypoblast and epiblast occurs at the beginning of the second week. They are the two main layers of the bilaminar germ disc. Either the inner cells embryoblast or the outer cells trophoblast will turn into two sub layers each other. The inner cells will turn into the hypoblast layer that will surround the other layer called epiblast layer, and these layers will form the embryonic disc in which the embryo will develop. The place where the embryo develops is called the amniotic cavity, which is the inside the disc.
Cells from the upper layer of the disc (the epiblast) extend around the amniotic cavity, creating a membranous sac that forms into the amnion by the end of the second week. The amnion contains amniotic fluid that cushions and protects the embryo. Early in development, amniotic fluid consists almost entirely of a filtrate of maternal plasma, but as the kidneys of the fetus begin to function at approximately the eighth week, they add urine to the volume of amniotic fluid. Floating within the amniotic fluid, the embryo is protected from trauma and temperature stress. It can move freely within the fluid and can prepare for swallowing and breathing out of the uterus.
On the ventral side of the embryonic disc, opposite the amnion, cells in the lower layer of the embryonic disc (the hypoblast) extend into the blastocyst cavity and form a yolk sac. The yolk sac supplies some nutrients absorbed from the trophoblast and also provides primitive blood circulation to the developing embryo for the second and third week of development. When the placenta takes over nourishing the embryo at approximately week 4, the yolk sac has been greatly reduced in size and its main function is to serve as the source of blood cells and germ cells (cells that will give rise to gametes). During week 3, a finger-like outpocketing of the yolk sac develops into the allantois, a primitive excretory duct of the embryo that will become part of the urinary bladder. Together, the stalks of the yolk sac and allantois establish the outer structure of the umbilical cord.
The last of the extra-embryonic membranes is the chorion, which is the one membrane that surrounds all others. The chorion and the amnion together form the amniotic sac.

As the third week of development begins, the embryo develops three germ layers (endoderm, mesoderm and ectoderm), which differentiate into distinct tissues, through the process of gastrulation (Pic. 3). The embryo, which takes the shape of an oval-shaped disc, forms an indentation called the primitive streak along the dorsal surface of the epiblast. A node at the caudal or “tail” end of the primitive streak emits growth factors that direct cells to multiply and migrate. Cells migrate toward and through the primitive streak and then move laterally to create two new layers of cells. The first layer is the endoderm, a sheet of cells that displaces the hypoblast and lies adjacent to the yolk sac. The second layer of cells fills in as the middle layer, or mesoderm. The cells of the epiblast that remain (not having migrated through the primitive streak) become the ectoderm.
Each of these germ layers will develop into specific structures in the embryo. Whereas the ectoderm and endoderm form tightly connected epithelial sheets, the mesodermal cells are less organized and exist as a loosely connected cell community. The endoderm gives rise to form the epithelium of the gastrointestinal and respiratory system and organs associated with the gastrointestinal system, such as the liver and pancreas. The ectoderm gives rise to cell lineages that differentiate to become the central and peripheral nervous systems, sensory organs, epidermis, hair, and nails. The mesoderm develops into the skeleton, muscles, connective tissue, heart, blood vessels, dermis, kidneys and the notochord (a structure of vertebrates from which the spine develops).

Following gastrulation, the three germ layers of the embryo differentiate and further specialize to form the various organs of the organism in the process of organogenesis. During differentiation, the embryonic stem cells express specific sets of genes which will determine their ultimate cell type (Pic. 4). For example, some cells in the ectoderm will express the genes specific to skin cells. As a result, these cells will differentiate into epidermal cells. Therefore, the process of differentiation is regulated by cellular signaling cascades.

One of the first steps of organogenesis is the formation of the neural system, neurulation. The ectoderm forms epithelial cells and tissues, as well as neuronal tissues. During the formation of the neural system, special signaling molecules called growth factors signal some cells at the edge of the ectoderm to form epidermis cells. The remaining cells in the center form the neural plate. If the signaling by growth factors were disrupted, then the entire ectoderm would differentiate into neural tissue. During the fourth week, the neural plate undergoes a series of cell movements where it rolls up and forms a tube called the neural tube (Pic. 5). In further development, the neural tube will give rise to the brain and the spinal cord. The tube lies atop a notochord, which eventually becomes the nucleus pulposus of intervertebral discs. Block-like structures called somites form on either side of the tube, eventually differentiating into the axial skeleton, skeletal muscle, and dermis. During the fourth and fifth weeks, the superior part of the neural tube flexes at the level of the future midbrain—the mesencephalon. Above the mesencephalon is the prosencephalon (future forebrain) and beneath it is the rhombencephalon (future hindbrain).
The optical vesicle (which eventually becomes the optic nerve, retina and iris) forms at the basal plate of the prosencephalon. The alar plate of the prosencephalon expands to form the cerebral hemispheres (the telencephalon) whilst its basal plate becomes the diencephalon. The diencephalon, mesencephalon and rhombencephalon constitute the brain stem of the embryo. It continues to flex at the mesencephalon. The rhombencephalon folds posteriorly, which causes its alar plate to flare and form the fourth ventricle of the brain. Finally, the optic vesicle grows to form an optic outgrowth.
The embryo, which begins as a flat sheet of cells, begins to acquire a cylindrical shape through the process of embryonic folding (Pic. 6) at approximately day 16. The embryo folds laterally and again at either end, forming a C-shape with distinct head and tail ends. The embryo envelops a portion of the yolk sac, which protrudes with the umbilical cord from what will become the abdomen. The folding essentially creates a tube, called the primitive gut that is lined by the endoderm. The amniotic sac, which was sitting on top of the flat embryo, envelops the embryo as it folds.

Like the central nervous system, the heart also begins its development in the embryo as a tube-like structure, connected via capillaries to the chorionic villi. By day 19, following cell signaling, two strands begin to form as tubes in this region, as a lumen develops within them. These two endocardial tubes grow and by day 21 have migrated towards each other and fused to form a single primitive heart tube, the tubular heart. This is enabled by the folding of the embryo which pushes the tubes into the thoracic cavity. Cells of the primitive tube-shaped heart are capable of electrical conduction and contraction. The heart begins beating in the beginning of the fourth week, although it does not actually pump embryonic blood until a week later, when the oversized liver has begun producing red blood cells (this is a temporary responsibility of the embryonic liver that the bone marrow will assume during fetal development).

During weeks 4–5, the eye pits form, the rudiments of the pulmonary system are formed and limb buds become apparent. The upper limb buds are destined to become arms and lower buds will become legs, while these ones form a few days after the upper limb buds.
During the sixth week, uncontrolled fetal limb movements begin to occur. The gastrointestinal system develops too rapidly for the embryonic abdomen to accommodate it, and the intestines temporarily loop into the umbilical cord. Paddle-shaped hands and feet develop fingers and toes by the process of apoptosis (programmed cell death), which causes the tissues between the fingers to disintegrate.
By week 7, the facial structure is more complex and includes nostrils, outer ears, and lenses. By the eighth week, the head is nearly as large as the rest of the embryo’s body, and all major brain structures are in place. The external genitalia are apparent, but at this point, male and female embryos are indistinguishable. Bone begins to replace cartilage in the embryonic skeleton through the process of ossification.
By the end of the embryonic period, the embryo is approximately 3 cm from crown to rump and weighs approximately 8 g. Further development, from week 9, continues as a fetal development. 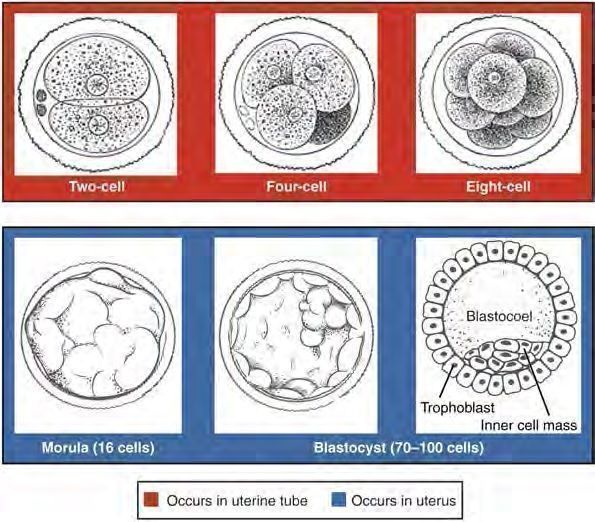 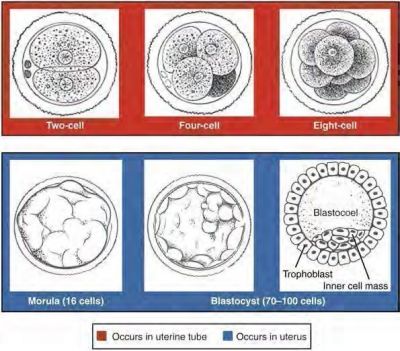 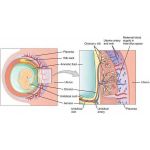 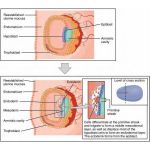 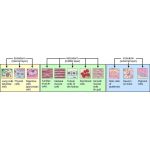 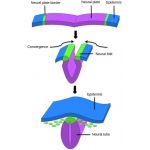 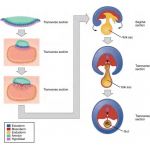 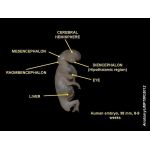