In humans, the fetal stage of prenatal development starts at the beginning of the 11th week in gestational age, which is the ninth week after fertilization. Since the precursors of all the major organs are created by this time, the fetal period is described both by organ and by a list of changes by weeks of gestational age.

Week 9: At the start of the fetal stage (week 9), the fetus is typically about 30 millimeters in length from crown to rump, and weighs about eight grams. The head makes up nearly half of the fetus' size (Pic. 1). The four chamber heart is finishing developing and the embryonic tail goes away. Breathing-like movement of the fetus is necessary for stimulation of lung development, rather than for obtaining oxygen.

Week 10: At week 10, finger nails and hair start to grow and the placenta starts to function. The heart, hands, feet, brain, and other organs are present, but are only at the beginning of development and have minimal operation (Pic. 2). The brain continues to expand, the body elongates, and ossification continues. Fetal movements are frequent during this period, but are jerky and not well-controlled. The bone marrow begins to take over the process of erythrocyte production—a task that the liver performed during the embryonic period. The liver now secretes bile. The fetus circulates amniotic fluid by swallowing it and producing urine. By the end of week 12, the fetus measures approximately 9 cm from crown to rump.

Weeks 13 - 16: Weeks 13–16 are marked by sensory organ development. From week 13, sex prediction by obstetric ultrasonography is almost 100% accurate. The eyes move closer together; blinking motions begin, although the eyes remain sealed shut. The lips exhibit sucking motions. The ears move upward and lie flatter against the head. The scalp begins to grow hair. Fetal skin is almost transparent. The excretory system is also developing: the kidneys are well-formed, and meconium, or fetal feces, begins to accumulate in the intestines. Meconium consists of ingested amniotic fluid, cellular debris, mucus, and bile.

Weeks 16 - 20: During approximately weeks 16–20, as the fetus grows and limb movements become more powerful, the mother may begin to feel quickening, or fetal movements. However, space restrictions limit these movements and typically force the growing fetus into the “fetal position,” with the arms crossed and the legs bent at the knees. Lanugo covers the entire body. The fetal heartbeat can be heard with a stethoscope.

During prenatal development, the fetal circulatory system is integrated with the placenta via the umbilical cord so that the fetus receives both oxygen and nutrients from the placenta. Unlike a mature cardiovascular system, however, the fetal cardiovascular system also includes circulatory shortcuts, or shunts. A shunt is an anatomical (or sometimes surgical) diversion that allows blood flow to bypass immature organs such as the lungs and liver until childbirth. Blood from the placenta is carried to the fetus by the umbilical vein. About half of this enters the fetal ductus venosus and is carried to the inferior vena cava, while the other half enters the liver proper from the inferior border of the liver. The branch of the umbilical vein that supplies the right lobe of the liver first joins with the portal vein. The blood then moves to the right atrium of the heart. In the fetus, there is an opening between the right and left atrium (the foramen ovale), and most of the blood flows from the right into the left atrium, thus bypassing pulmonary circulation (Pic.3). The majority of blood flow is into the left ventricle from where it is pumped through the aorta into the body. Some of the blood moves from the aorta through the internal iliac arteries to the umbilical arteries, and re-enters the placenta, where carbon dioxide and other waste products from the fetus are taken up and enter the woman's circulation.

During male fetal development, the bipotential gonads become the testes and associated epididymis. The Müllerian ducts degenerate. The Wolffian ducts become the vas deferens, and the cloaca becomes the urethra and rectum. During female fetal development, the bipotential gonads develop into ovaries. The Wolffian ducts degenerate. The Müllerian ducts become the uterine tubes and uterus, and the cloaca divides and develops into a vagina, a urethra, and a rectum (Pic.4). 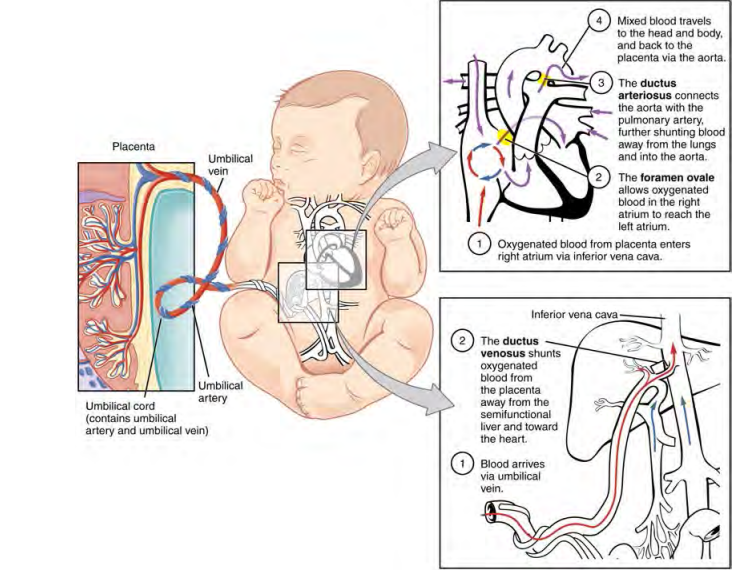 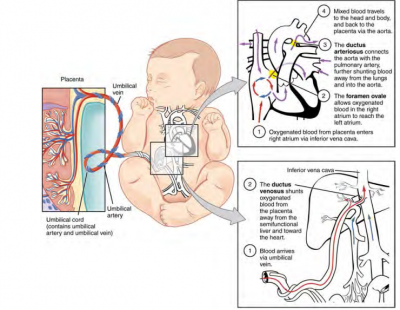 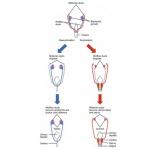 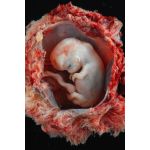 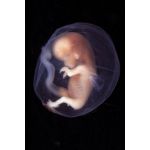