Folliculogenesis is the progression of a number of small primordial follicles into large preovulatory follicles that enter the menstrual cycle. From the beginning of primordial follicles growth until oocyte maturation in preovulatory follicles oocyte cytoplasmic organelles undergo dynamic alterations that reflect physiological changes and development. Females have hundreds of thousands of oocytes already at the time of birth. However, before birth, some oocytes will die by a process named apoptosis. Apoptosis is likely to be a mechanism for reducing the number of oocytes/ovarian follicles, and females are born with far fewer oocytes than the maximum number reached during fetal life.

Recently, few publications have challenged the idea that a finite number of follicles are set around the time of birth. Renewal of ovarian follicles from germline stem cells (originating from bone marrow and peripheral blood) was reported in the postnatal mouse ovary. Studies attempting to replicate these results are underway, but a study of populations in 325 human ovaries found no supporting evidence for follicular replenishment. Researchers at the University of Edinburgh determined that by the time women are 30 years old, only 10% of their non-growing follicles remain. Moreover, as women age, double-strand breaks accumulate in their primordial follicle reserve. DNA double-strand break repair is vital for the maintenance of oocyte reserve, and a decline in efficiency of repair with age plays a key role in the depletion of the ovarian reserve (ovarian aging).

The ovarian cortex contains follicles at different developmental stages; these can be classified according to size, type and number of granulosa cells, or if they are dependent or not on gonadotrophic hormones:

The follicles are named preantral or antral follicles, according to the absence or presence of a cavity, respectively. Preantral follicles are usually classified in three stages: primordial, primary or secondary follicles. At the antral stage, most follicles undergo atretic degeneration. However, a few of them reach the preovulatory stage under gonadotropin stimulation. The fate of each follicle is controlled by endocrine and paracrine factors.

The complete development of the follicle culminates in ovulation, which is when the mature cumulus-oocyte complex is released and may be fertilized. The whole process of development, from primordial follicle to early tertiary follicle, takes approximately two months in humans.

Folliculogenesis begins with follicles in a resting state. These small primordial follicles are present in newborn females and are the prevailing follicle type in the adult ovary (Pic.1 a). At 18–22 weeks post-conception, the cortex of the female ovary contains its peak number of follicles (about 4 to 5 million in the average case, but individual peak populations range from 6 to 7 million. These primordial follicles contain:

After puberty, a few primordial follicles will respond to a recruitment signal each day, and will join a pool of immature growing follicles called primary follicles. Primary follicles start with a single layer of granulosa cells, but the granulosa cells then become active and transition from a flat or squamous shape to a rounded, cuboidal shape as they increase in size and proliferate.

As the granulosa cells divide, the follicles, now called secondary follicles ( Pic.1.b) increase in diameter, adding a new outer layer of connective tissue, blood vessels, and theca cells – theca externa, theca interna (cells that work with the granulosa cells to produce estrogens).Within the growing secondary follicle, the primary oocyte now secretes a thin acellular membrane called the zona pellucida that will play a critical role in fertilization. There are also cortical granules (seen for the first time in secondary follicles). They are small organelles like vesicles containing enzymes that undergo exocytosis upon fertilization. At this time, cortical granules are aligned near the oocyte plasmatic membrane and the release of their contents aims to harden the zona pellucida to prevent polyspermy.

A thick fluid, called follicular fluid, that has formed between the granulosa cells also begins to collect into one large pool, or antrum. Follicles in which the antrum has become large and fully formed are considered tertiary follicles (or antral follicles). In general, in tertiary follicles, all the oocytes are completely surrounded by the zona pellucida, which is crossed by projections of the granulosa cells that form indentations in the oolemma.

At this time, the organelles have achieved a more even distribution throughout the ooplasm, and elongated mitochondria, lipid droplets and vesicles increase in numbers. That is only reasonable, since oocytes that grow to a bigger size may require larger amounts of the machinery needed to move and store cytoplasmic constituents. Several follicles reach the tertiary stage at the same time, and most of these will undergo atresia. The one that does not die will continue to grow and develop (preovulatory follicle) until ovulation, when it will expel its secondary oocyte surrounded by several layers of granulosa cells from the ovary. The ovum will now travel down one of the fallopian tubes to eventually be discharged through menstruation, if not fertilized by a sperm cell, or implanted in the uterus, if previously fertilized.

The most follicles don’t make it to this point. In fact, roughly 99 percent of the follicles in the ovary will undergo atresia, which can occur at any stage of folliculogenesis.

Five hormones participate in an intricate process of positive and negative feedback to regulate folliculogenesis (Pic. 2). They are:

The hypothalamus produces GnRH, a hormone that signals the anterior pituitary gland to produce the gonadotropins FSH and LH. These gonadotropins leave the pituitary and travel through the bloodstream to the ovaries, where they bind to receptors on the granulosa and theca cells of the follicles. FSH stimulates the follicles to grow (hence its name of follicle-stimulating hormone), and the five or six tertiary follicles expand in diameter. The release of LH also stimulates the granulosa and theca cells of the follicles to produce the sex steroid hormone estradiol, a type of estrogen. This phase of the ovarian cycle, when the tertiary follicles are growing and secreting estrogen, is known as the follicular phase. The more granulosa and theca cells a follicle has (that is, the larger and more developed it is), the more estrogen it will produce in response to LH stimulation. As a result of these large follicles producing large amounts of estrogen, systemic plasma estrogen concentrations increase.

Following a classic negative feedback loop, the high concentrations of estrogen will stimulate the hypothalamus and pituitary to reduce the production of GnRH, LH, and FSH. Because the large tertiary follicles require FSH to grow and survive at this point, this decline in FSH caused by negative feedback leads most of them to die (atresia). Typically only one follicle, now called the dominant follicle, will survive this reduction in FSH, and this follicle will be the one that releases an oocyte, in the process called ovulation. 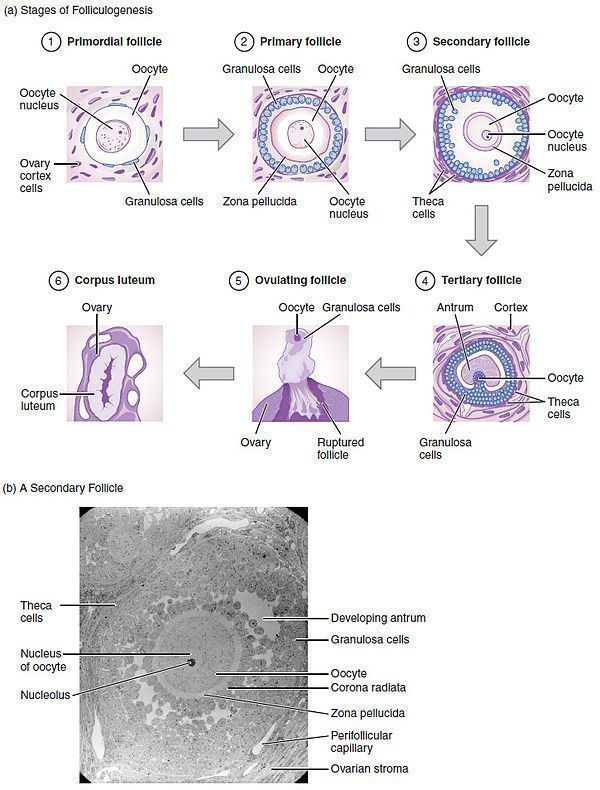 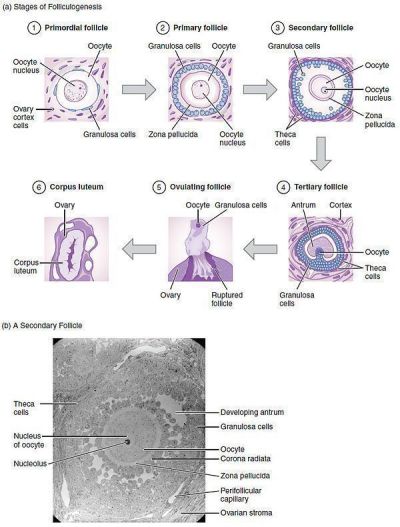 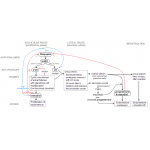