In humans implantation is the very early stage of pregnancy at which the conceptus adheres to the wall of the uterus (Pic.1). At this stage of prenatal development, the conceptus is called blastocyst. It is by this adhesion that the foetus receives oxygen and nutrients from the mother to be able to grow. Implantation of a fertilized ovum is most likely to occur about 9 days after ovulation, ranging between 6 and 12 days.

The endometrium increases thickness, becomes vascularized and its glands grow to be tortuous and boosted in their secretions. These changes reach their maximum about 7 days after ovulation. Furthermore, the surface of the endometrium produces a kind of rounded cells, which cover the whole area toward the uterine cavity. This happens about 9 to 10 days after ovulation. These cells are called decidual cells, which emphasizes that the whole layer of them is shed off in every menstruation if no pregnancy occurs, just as leaves of deciduous trees. The uterine glands, on the other hand, decrease in activity and degenerate already 8 to 9 days after ovulation in absence of pregnancy.
The decidual cells originate from the stromal cells that are always present in the endometrium. However, the decidual cells make up a new layer, the decidua. The rest of the endometrium, in addition, expresses differences between the luminal and the basal sides. The luminal cells form the zona compacta of the endometrium, in contrast to the basalolateral zona spongiosa, which consists of the rather spongy stromal cells.

Decidualization succeeds predecidualization if pregnancy occurs. This is an expansion of it, further developing the uterine glands, the zona compacta and the epithelium of decidual cells lining it. The decidual cells become filled with lipids and glycogen and take the polyhedral shape characteristic for decidual cells. It is likely that the blastocyst itself makes the main contribution to this additional growing and sustaining of the decidua. An indication of this is that decidualization occurs at a higher degree in conception cycles than in non-conception cycles. Furthermore, similar changes are observed when giving stimuli mimicking the natural invasion of the embryo.

The decidua can be organized into separate sections, although they have the same composition:

Pinopodes are small, finger-like protrusions from the endometrium. They appear between day 19 and day 21 of gestational age. This corresponds to a fertilization age of approximately 5 to 7 days, which corresponds well with the time of implantation. They only persist for 2 to 3 days. The development of them is enhanced by progesterone but inhibited by estrogens. Pinopodes endocytose uterine fluid and macromolecules in it. By doing so, the volume of the uterus decreases, taking the walls closer to the embryoblast floating in it. Thus, the period of active pinocytes might also limit the implantation window.

The embryoblast spends approximately 72 hours in the uterine cavity before implanting. In that time, it cannot receive nourishment directly from the blood of the mother, and must rely on secreted nutrients into the uterine cavity, e.g. iron and fat-soluble vitamins. In addition to nourishment, the endometrium secretes several steroid-dependent proteins, important for growth and implantation. Cholesterol and steroids are also secreted. Implantation is further facilitated by synthesis of matrix substances, adhesion molecules and surface receptors for the matrix substances.

At the end of the first week, the blastocyst (Pic.2) comes in contact with the uterine wall and adheres to it, embedding itself in the uterine lining via the trophoblast cells. Thus begins the process of implantation, which signals the end of the pre-embryonic stage of development. Implantation can be accompanied by minor bleeding. The blastocyst typically implants in the fundus of the uterus or on the posterior wall. However, if the endometrium is not fully developed and ready to receive the blastocyst, the blastocyst will detach and find a better spot. A significant percentage (50–75 percent) of blastocysts fail to implant; when this occurs, the blastocyst is shed with the endometrium during menses. The high rate of implantation failure is one reason why pregnancy typically requires several ovulation cycles to achieve.
When implantation succeeds and the blastocyst adheres to the endometrium, the superficial cells of the trophoblast fuse with each other, forming the syncytiotrophoblast (Pic.3), a multinucleated body that digests endometrial cells to firmly secure the blastocyst to the uterine wall. In response, the uterine mucosa rebuilds itself and envelops the blastocyst. The trophoblast secretes human chorionic gonadotropin (hCG), a hormone that directs the corpus luteum to survive, enlarge, and continue producing progesterone and estrogen to suppress menses.
These functions of hCG are necessary for creating an environment suitable for the developing embryo. As a result of this increased production, hCG accumulates in the maternal bloodstream and is excreted in the urine. Implantation is complete by the middle of the second week. Just a few days after implantation, the trophoblast has secreted enough hCG for an at-home urine pregnancy test to give a positive result.
Most of the time an embryo implants within the body of the uterus in a location that can support growth and development.

Implantation failure is considered to be caused by inadequate uterine receptivity in two-thirds of cases, and by problems with the embryo itself in the other third.
Inadequate uterine receptivity may be caused by abnormal cytokine and hormonal signaling as well as epigenetic alterations. Recurrent implantation failure is a cause of female infertility. Therefore, pregnancy rates can be improved by optimizing endometrial receptivity for implantation. Evaluation of implantation markers may help to predict pregnancy outcome and detect occult implantation deficiency. Luteal support is the administration of medication, generally progestins, for the purpose of increasing the success rate of implantation and early embryogenesis, thereby complementing the function of the corpus luteum.
In women with more than 3 implantation failures in assisted reproduction, a review of several small randomized controlled studies estimated that the use of adjunct low molecular weight heparin (LMWH) improves live birth rate by approximately 80%. 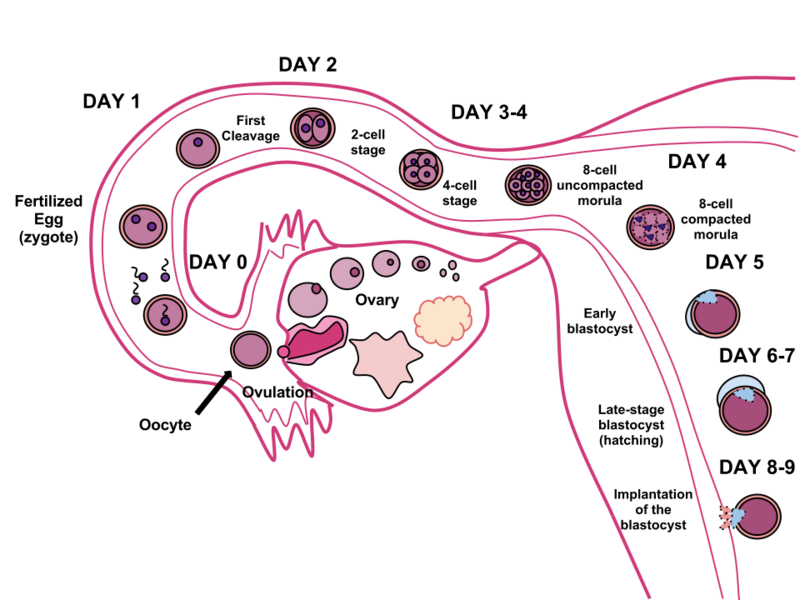 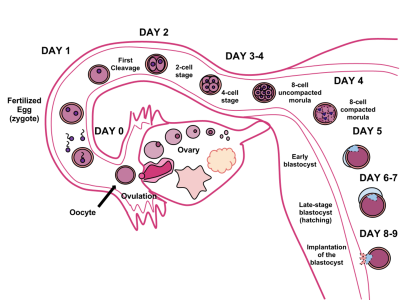 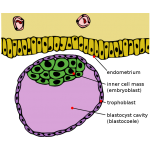 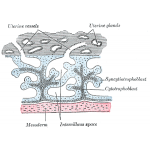