Periodical changes of the endometrium, externally presenting as menstruation, that are enabling pregnancy in fertile women.

Menarche, the first period, usually begins between twelve and fifteen years of age (the average age is generally later in the developing countries than in the developed world). Factors such as genetics, diet, and overall health can affect timing. The typical length of the menstrual cycle, i. e. the time between the first day of one and the first day of the next period, is on average 28 days. However, this varies among women, and even in the same woman from one cycle to the next, typically from 21 to 35 days. Bleeding usually lasts around 2 to 7 days. The cessation of menstrual cycles at the end of a woman's reproductive period is called menopause. After that, a woman can no longer get pregnant.

The production of hormones by the ovaries (the granulosa and theca cells) throughout the ovarian cycle controls the events in the uterus. This results in three phases of the menstrual cycle: the menses phase, the proliferative phase, and the secretory phase.

During this phase, the endometrium is shed, which results in the menstruation (i. e. shedding of blood and pieces of endometrial tissue through the vagina). Although it averages approximately 5 days, the menses phase can last from 2 to 7 days, or even longer. The menses phase occurs during the early days of the follicular phase of the ovarian cycle, when progesterone, follicle stimulating hormone (FSH), and luteinizing hormone (LH) levels are low (Pic. 1). As the corpus luteum (a progesterone producing structure that forms in the ovary after ovulation, i. e. when the oocyte is released, from the rest of the follicle: the granulose and theca cells; Pic. 2) degrades, the progesterone concentrations decline. This marks the end of the luteal phase of the ovarian cycle. This decline in progesterone triggers the shedding of the stratum functionalis of the endometrium.

Once menstrual flow ceases, the endometrium begins to proliferate (i. e. the cells multiply) again, marking the beginning of the proliferative phase of the menstrual cycle. It occurs when the granulosa and theca cells of the follicles begin to produce increased amounts in estrogen. These rising estrogen concentrations stimulate the endometrial lining to rebuild. Ovulation marks the end of the proliferative phase of the menstrual cycle as well as the end of the follicular phase of the ovarian cycle. Besides inducing the ovulation, high estrogen levels also increase the uterine tube contraction (that facilitate the pick-up and transfer of the ovulated oocyte), and decrease the acidity of the vagina, making it more hospitable to sperm.

After the ovulation, the corpus luteum comes ingo being in the ovary. In the uterus, progesterone from the corpus luteum begins the secretory phase. In this phase, the endometrial lining prepares for implantation (Pic. 3). Over the next 10 to 12 days, the endometrial glands secrete a fluid rich in glycogen. If fertilization has occurred, this fluid will nourish the ball of cells now developing from the zygote (Pic. 4). At the same time as this secretion, the spiral arteries develop to provide blood to the thickened stratum functionalis (i. e. the uppermost layer of the endometrium).

If no pregnancy occurs within approximately 10 to 12 days, the corpus luteum will degrade into the corpus albicans (Pic. 5). Levels of both estrogen and progesterone will fall, and the endometrium will grow thinner. The spiral arteries will constrict, therefore the oxygen supply will decrease and the endometrial tissue will die. This will result in menses - or the first day of the next cycle.

The most fertile period covers the time from some 5 days before until 1 to 2 days after ovulation. In an average cycle, this corresponds to the second and the beginning of the third week. A variety of methods have been developed to help individual women estimate the relatively fertile and relatively infertile days in the cycle - for example urine test kits that detect the LH surge occuring 24 to 36 hours before ovulation ("ovulation predictor kits"), computerized devices that interpret basal body temperatures, or urinary test results.

Menstrual cycle and areas of life 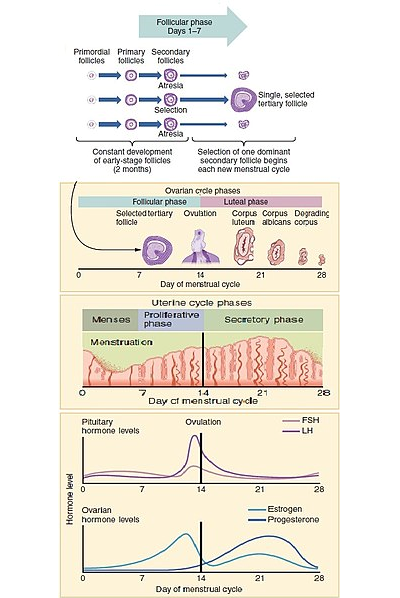 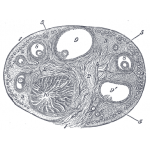 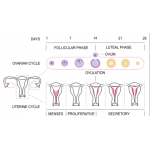 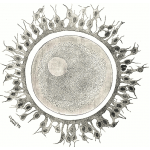 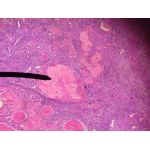