The number of antral follicles in ovaries serving as one of the parameters to estimate ovarian reserve.

The number of antral follicles (a stage of folliculogenesis) determinates the quantity of oocytes potentially available for ovulation. It is one of the characteristics used to specify so called ovarian reserve which represents important factor to predict the result of IVF cycle, among other things. AFC can be set by usage of transvaginal ultrasonography (a sonography that applies an ultrasound transducer in the vagina to visualize organs within the pelvic cavity). AFC is reflecting quite accurately the pool of recruitable follicles in ovaries affected by follicle-stimulating hormone (FSH) and correlates with ovarian response in IVF programmes. AFC also correlates with menopausal transition. To comprehend the importance of antral follicle count, it needs to be explained at least briefly the definition of antral follicle itself.

As mentioned above, antral follicle count is one of the measured characteristics reflecting FOR which is an acronym for ovarian reserve (OR). Ovarian reserve is a female reproductive specification used to determine potential capacity of the ovary to provide oocytes that are capable of fertilization (growing oocytes) resulting in a healthy and successful pregnancy. Total ovarian reserve (TOR) stand for the count of all stages of follicles (growing and not growing follicles) that can be found in ovaries.

The follicles created in prenatal age represent the first stage of folliculogenesis and they are called as primordial follicles. The number of primordial follicles is quite variable among women and ranges approximately from hundreds of thousands to millions. The size of a woman's initial follicle pool between birth and menarche is of great importance because it reflects the symbolic starting point of follicle depletion. On the start of the puberty (before menarche) most of primordial follicles undergo so called process of atresia (natural oocyte abolishment) reducing significantly total ovarian reserve. The size of the initial TOR is strongly influenced by genetics. Also, elevated androgen levels during prenatal development have an adverse effect on the early establishment of the ovarian reserve. Nevertheless, primordial follicles always represent the main part of TOR. A woman's cumulative hypothetical pregnancy chance is mathematically reflected in her complete follicle pool, her TOR. Since TOR declines with age, "ovarian age" is another frequently heard term to describe a woman's remaining reproductive capacity.

Antral follicle count can point out some problems regarding TOR and may also help to conduce properly IVF (in vitro fertilization) treatment. A low AFC is a major factor in the diagnosis of poor ovarian reserve. Poor ovarian reserve: (also known as impaired ovarian reserve, premature ovarian aging or declining ovarian reserve) is a condition of low fertility characterized by 1): low numbers of remaining oocytes in the ovaries or 2) possibly impaired pre-antral oocyte development or recruitment. AFC can be used to predict IVF outcome quite accurately, especially in older women (<45 years of age). A great advantage of AFC over any other test is its potential usefulness for its ability to concomitantly predict low and high responders to the treatment. AFC performs well as a test for ovarian response being superior or at least similar to complex expensive and time consuming endocrine tests and it is probably most applicable in general practise.

There is often observed lower fertility in women with relatively lower AFC. Fecundity (spontaneous conception chance) and fertility treatment success depend on TOR, and especially FOR: The lower FOR, the poorer are overall chances of conception in the sense that low antral follicle count (<4 antral follicles; poor ovarian reserve) means that less time of fertile period is left in women’s life. As TOR and FOR decline with advancing age, pregnancy chances, therefore, decline in parallel. Naturally, AFC correlates with age and the time of menopause (Pic. 2). This means that in case of low AFC at specific age, sooner the menopause will appear in comparison with women of same age and higher AFC. If low AFC is correlated with endocrine test (such as FSH testing and AMH testing; AMH = anti-müllerian hormone) it may predict lowered chances of successful IVF cycles. AFC itself will determinate the dosage of FSH stimulation during assisted reproduction cycles. 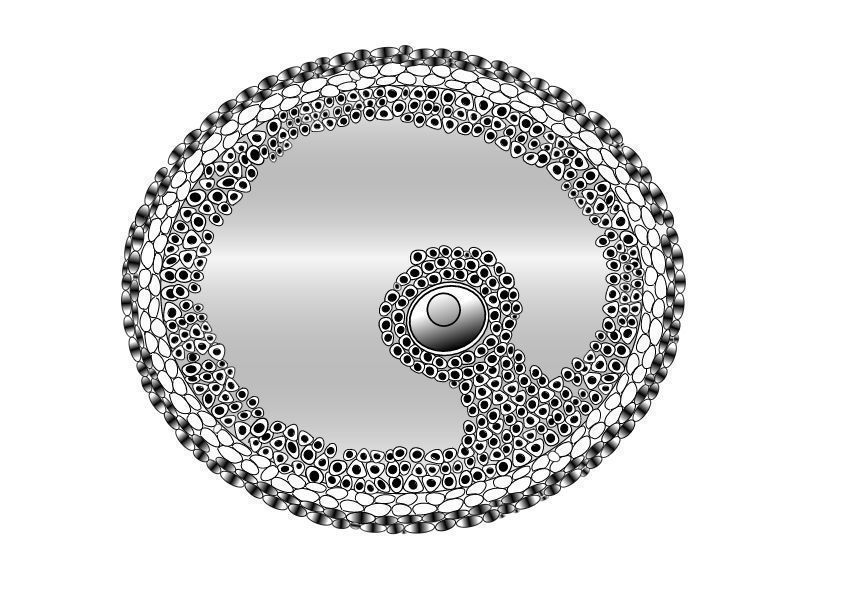 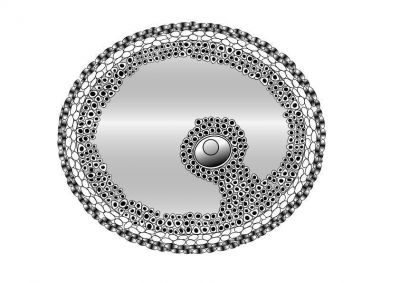 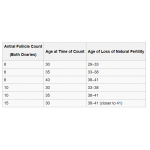