An abnormal immune response to a normal body part.

Autoimmune diseases are chronic inflammatory disorders caused by a loss of self-tolerance in which the aberrant immune system attacks the healthy cells and tissues, leading to chronic inflammation.

The autoimmune inflammation can involve multiple organs, resulting in systemic autoimmune diseases, such as rheumatoid arthritis (chronic joint inflammation), systemic lupus erythematosus (the most common ones include extreme fatigue, painful or swollen joints (arthritis), unexplained fever, skin rashes, and kidney problems), and systemic sclerosis (thickening of the skin). On the other hand, organ-specific autoimmune diseases, including primary biliary cirrhosis (bile ducts in the liver become damaged), and type 1 diabetes, occur when the autoimmune responses (the reactions of immune system) are limited to specific organs.

Diagnosing autoimmune diseases can be particularly difficult, because these disorders can affect any organ or tissue in the body and produce a wide variety of signs and symptoms. Many early symptoms of these disorders — such as fatigue, joint and muscle pain, fever or weight change — are nonspecific. Symptoms are often not apparent until the disease has reached a relatively advanced stage. Accordingly, prevention in most susceptible individuals and early diagnosis are two most important approaches, when researching the future therapy for autoimmune diseases. Therapy depends on the underlaying causes.

Autoimmune diseases can have a variety of mixed symptoms (Tab. 1) that flare up and disappear, making diagnosis difficult.

In some cases conditions that affect the blood vessels can cause problems, such as erectile dysfunction in men, while women who have autoimmune diseases affecting their glands may have vaginal dryness. Joint pain can also inhibit sexual relationships.

Female fertility can be affected by diseases or dysfunctions of reproductive tract, neuroendocrine system, and immune system. Reproductive autoimmune failure can be associated with overall activation of immune system or with immune system reactions specifically directed against ovarian antigens (evoking the immune reaction).

Thyroid autoantibodies have been associated with recurrent pregnancy loss, premature ovarian failure (early menopause), and repeatedly unsuccessful in vitro fertilization (IVF) attempts. This is hypothetically explained by the fact that organ-specific autoimmune diseases, like thyroiditis, may develop secondary to some basic cellular abnormality that directly affects pregnancy outcome.

Autoimmunity and the presence of autoantibodies have been invoked as a possible mechanism of in vitro fertilization failure. There are contradicting data regarding the importance of certain antibodies to damage directly the preimplantation embryo, interfering with implantation process or formation of placenta. Consequently, the overall activation of the immune system in female infertility has been suggested.

This condition cannot be prevented. While pregnant, the autoimmune disease may flare-up, but this can be controlled with medications.

Female fertility is regulated by a series of highly coordinated and synchronized interactions in the hypothalamic-pituitary-ovarian axis (alludes to the connection between the hypothalamus, pituitary gland, and gonads). Therefore, female fertility can be affected by diseases or dysfunctions of reproductive tract, neuroendocrine system, and immune system or by any severe or exhausting general disease.

Autoimmune mechanisms as well as an increased production of multiple autoantibodies are involved in such infertility disorders as premature ovarian failure, endometriosis, polycystic ovary syndrome, unexplained infertility, and repeatedly unsuccessful IVF attempts and may be responsible for the pathophysiology of preeclampsia or spontaneous abortions.

Immunologic infertility is characterized by the presence of antibodies against sperms in the serum and/or in the seminal plasma or on the sperm surface. An autoimmune reaction in prostate can lead to the deterioration of semen quality and sperm damage.

Early age at onset cannot always be associated with a worse prognosis. Early age at onset is a worst prognostic factor for some autoimmune diseases (i.e., systemic lupus erythematosus and diabetes mellitus 1), while for others it does not have a significant influence on the course of disease (i.e., Sjögren’s syndrome) or no unanimous consensus exists (i.e., rheumatoid arthritis and multiple sclerosis). Knowledge of the early-age symptoms will help physicians to provide better treatment which, coupled with educational and transition support, might improve outcome.

However, the rate of miscarriage and preterm delivery is increased in women with anti-thyroid antibodies who underwent in vitro fertilization/intracytoplasmic sperm injection (IVF/ICSI). 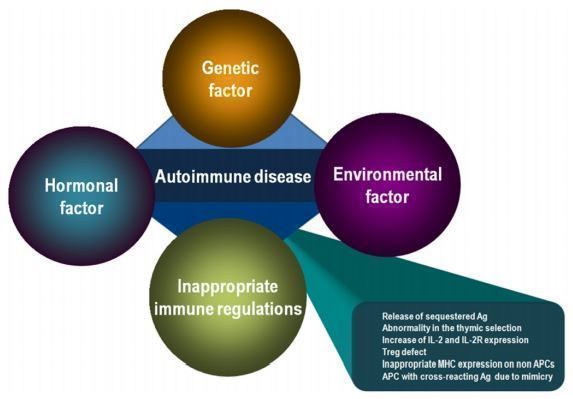 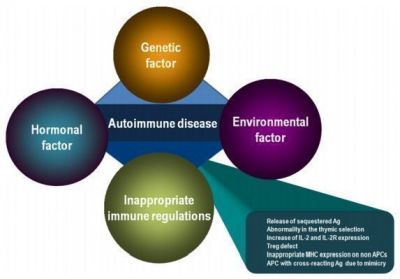 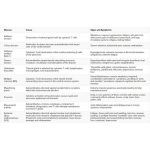