A congenital disorder where a hymen without an opening completely obstructs the vagina and with negative impact on female fertility.

A closed (imperforate) hymen is a congenital disorder where a hymen without an opening completely obstructs the vagina (Pic. 1). It is caused by a failure of the hymen to perforate during fetal development when the transitional structure in the development of female genitalia called sinovaginal bulbs fail to canalize with the rest of the vagina.

An imperforate hymen is most often diagnosed in adolescent girls after the age of menarche with otherwise normal development. In adolescent girls of menarcheal age, the typical presentation of the condition is amennorhea (absent period) and cyclic pelvic pain, indicative of hematocolpos (vagina filled with blood) secondary to vaginal obstruction.

The diagnosis of an imperforate hymen is usually made based purely on the physical exam, although if necessary the diagnosis can be confirmed by ultrasound. A closed hymen is usually visible on vaginal inspection as a bulging blue membrane. If hematocolpos is present, a mass is often palpable on abdominal or rectal examination.

An imperforate hymen can also be diagnosed in newborn babies and it is occasionally detected on ultrasound scans of the foetus during pregnancy. In newborns the diagnosis is based on the findings of an abdominal or pelvic mass or a bulging hymen. Examination of the normal neonatal vagina usually reveals a track of mucus at the posterior commissure of the labia majora (Pic. 2); an absence of mucus may indicate an imperforate hymen or another vaginal obstruction.

Closed hymen is treated by surgical incision of the hymen (Pic. 3; Pic. 4). Before surgical intervention in adolescents, symptoms can be relieved by the combined oral contraceptive pill taken continuously to suppress the menstrual cycle or NSAIDs (nonsteroidal anti-inflammatory drugs) to relieve pain. Surgical treatment of the imperforate hymen by hymenotomy typically involves making cruciate incisions in the hymen, excising segments of hymen from their bases, and draining the vaginal canal and uterus. For affected girls who wish (or whose parents wish) to have their hymens preserved, surgical techniques to excise of a central flange of the hymen can be used. The timing of surgical hymen repair is controversial: some doctors believe it is best to intervene immediately after the neonatal period, while others believe that surgical repair should be delayed until puberty, when estrogenization (level of estrogen) is complete.

If untreated or unrecognized before puberty, an imperforate hymen can lead to peritonitis (inflammation of the peritoneum - the thin tissue that lines the inner wall of the abdomen and covers most of the abdominal organs) or endometriosis due to retrograde bleeding (backward movement of menstrual fluids through the fallopian tubes and into the peritoneal cavity). Additionally, it can lead to mucometrocolpos (dilatation of the vaginal canal and uterus due to mucous buildup) or hematometrocolpos (dilatation due to buildup of menstrual fluid). Mucometrocolpos and hematocolpos can in turn cause urinary retention, constipation, and urinary tract infection.

The condition itself cannot be prevented but an early diagnosis is neccessary to prevent complications.

Early diagnosis of an imperforate hymen is important, since it can lead to serious complications such as infections, endometriosis and subfertility which means that female is difficult and rarely trapped and has a small number of offspring.

Surgery to remove an imperforate hymen won't affect a girl's future ability to have vaginal intercourse or have children. Pregnancy success is found more likely following surgical correction of an imperforate hymen than following repair of a complete transverse septum where the tissue spans an entire area of the vagina.

Generally, the prognosis and clinical outcome is good after surgery and most girls who want to conceive after surgery usually achieve pregnancy. Avoidance of persistent obstruction preserves the patient's fertility by reducing the risk of secondary endometriosis that may result from backflow of menstrual blood. In vitro fertilization (IVF) is an effective tool to overcome endometriosis-based infertility, particularly when other options fail. In theory, IVF should preempt the deleterious effects of endometriosis, as it is not dependent on the correct function of the fallopian tubes. In addition, compromised pelvic anatomy and the potentially hostile peritoneal environment are bypassed. 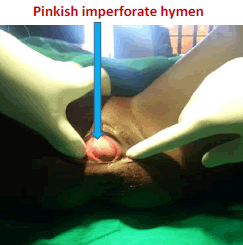 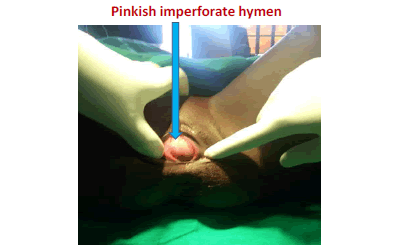 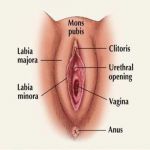 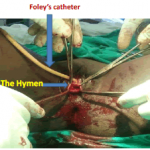 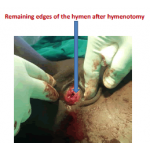