An inherited endocrine disorder causing development of male characteristics in females, and early puberty in both boys and girls.

Cortisol, which regulates the body´s response to stress and illness, shares some steps of its synthesis with another group of adrenal hormones, called mineralocorticoids. Mineralocorticoids, particularly aldosterone, control the levels of ions, mainly sodium (Na) and potassium (K), in the bodily fluids. The enzyme deficiency may also affect mineralocorticoid synthesis, and cause so-called adrenal (or Addisonian) crisis, which is a life-threatening situation.

Nonclassic form represents the milder forms of enzyme deficiency, which may go undetected until adolescence or adulthood. Symptoms are less pronounced and are mostly due to elevated androgens. In rarer forms of CAH, the levels of androgens may be decreased.

CAH and the specific enzyme deficiencies causing it are subject to a newborn screening programme. The salt-wasting form of CAH has an incidence of 1 in 15,000 births and is potentially fatal within a month if untreated. If diagnosed, steroid replacement is a simple, effective treatment. However, the screening test is very often falsely positive. When a positive result is detected, the infant must be referred to a pediatric endocrinologist to confirm or disprove the diagnosis. Since most infants with salt-wasting CAH become critically ill by 2 weeks of age, the evaluation must be done rapidly despite the high false positive rate.

CAH causes reduced fertility in both females and males. The underlying mechanisms are further discussed in the section How it can affect fertility. In females, elevated androgens are the main cause of reduced fertility, causing menstrual and ovulatory irregularities and impairing conception. In men, CAH is linked to decreased sperm count or even non-obstructive azoospermia, because of testicular dysfunction.

Although there is no cure, with proper treatment, most people with congenital adrenal hyperplasia can lead normal lives.

The symptoms of CAH depend on the severity of the enzyme deficiency. Classic congenital adrenal hyperplasia is generally recognized at birth or in early childhood because of ambiguous genitalia, salt wasting, or early virilization. Non-classical forms of CAH are characterized by milder enzyme deficiency and manifests commonly in adolescence or adulthood. Non-classic adrenal hyperplasia is generally recognized at or after puberty because of oligomenorrhea (infrequent, or very light menstruation) or virilizing signs in females.

Females with severe, salt-wasting forms of CAH are born with ambiguous genitalia, with varying degree of masculinization. The masculinization is classified into 5 stages, ranging from enlarged clitoris to fully developed penis and scrotal sac, which doesn’t contain testicles. Other organs of the reproductive system, the upper vagina, uterus, Fallopian tubes and ovaries, are normally developed. Infant boys may appear normal or may have enlarged genitalia.
However, in the salt wasting form, both boys and girls are endangered by the adrenal crisis. Due to low aldosterone, they lose large amounts of sodium in the urine. This leads to loss of blood volume and dehydration. On the other hand, elimination of potassium and acids is impaired, which causes hyperkalemia (high blood potassium) and acidosis (lower blood pH). Due to cortisol deficiency, the infant will also have low blood sugar, and will not be able to maintain normal blood pressure. The infants will usually develop severe vomiting and diarrhea, which further worsens the dehydration, and circulatory collapse with shock. Such situation is life-threatening and requires urgent treatment.

In milder forms of classical CAH, the majority of symptoms are caused by androgen excess and are summarilly called virilization (development of male characteristics). In females, virilization causes early puberty, short stature due to early closure of growth plates, deep voice, hirsutism (beard growth in women), male-typical sexual behavior and aggresivity, increased muscle growth, menstrual disorders, anovulation (absence of menstrual cycles due to no ovulation) and infertility. Some form of ambiguous genitalia may be also present. In males, the excess of androgens leads to premature puberty, short stature, enlarged penis, deeper voice, early growth of pubic hair and early onset of growth spurt (a period of accelerated growth, usually beginning in puberty). However, affected males usually appear normal at birth.

In milder enzyme deficiencies, symptoms may go unnoticed until puberty or adulthood, or the condition may even not be diagnosed at all. These symptoms include hirsutism, medication resistant acne, menstrual irregularities and mild subfertility in women, early pubic hair growth or accelerated growth in men. However, particularly in men, no symptoms may be present at all.

In females, the excess of androgens, and possibly also progesterone, impairs ovulation and may supress it completely, leading to anovulatory cycles. An anovulatory cycle is a menstrual cycle during which the ovaries do not release an oocyte. When a woman is anovulatory, she can't get pregnant because there is no egg to be fertilized. Women who are anovulatory have irregular, few or no periods.

In male patients, testicular dysfunction, affecting both types of cells involved in spermatogenesis, the Sertolli cells (cells in the testis that support the production of sperm cells) and the Leydig cells (cells responsible for testosterone production) has been observed. The elevated adrenal androgen levels lead to supression of hypothalamus and pituitary and a decrease in the level of luteinizing hormone (LH), which normally stimulates the Leydig cells. Without this stimulation, Leydig cell dysfunction leads to lower or even absent sperm production. Furthermore, both Leydig cells and Sertolli cells may be destroyed by the presence of Testicular adrenal rest tumor, a tumor arising as a complication of CAH, which is mentioned further in the text. Eventually, the amount of sperm in ejaculate may be diminished, or sperm may be completely absent without a physical obstacle in the genital tract, which leads to the diagnosis of non-obstructive azoospermia (Pic. 3).

As CAH is a genetic disease, it cannot be completely prevented. Pre-natal diagnosis of 21-hydroxylase deficiency in patients with positive family history is established to prevent complications in future. A positive diagnosis is treated with prenatal dexamethasone (a steroid hormone). Dexamethasone administered to the unborn child prevents the development of ambiguous genitalia and prevents future complications.

CAH is associated with reduced fertility in both females and males.

Fertility and the pregnancy rate are reduced in female patients, both with classic and non-classic forms of the disease, although non-classical forms are affected only mildly. Long-term anovulation and endometrial dysfunction are two characteristic fertility-related symptoms in women with CAH. Both of these symptoms can be attributed to the elevated androgens, mainly testosterone, in the serum. The excess of testosterone suppresses the pituitary, which then does not stimulate the ovaries to release oocytes. Furthermore, testosterone may interfere with the function of ovarian cells directly.

Another cause of subfertility is elevated progesterone, which can be produced by conversion from the adrenal testosterone. Progesterone may then impair ovulation, and hinder implantation by altering the endometrium. Another reported effect of elevated progesterone is thickened cervical mucus, which may prevent the sperm from entering the uterus, therefore acting as contraception.

In men, reduced fertility may be due to two main factors. The first one is testicular dysfunction, caused by lower production of luteinizing hormone. The luteinizing hormone secretion is supressed by the excessive amounts of adrenal testosterone, which in turn causes dysfunction of the Leydig cells in the testes and low testicular testosterone. This inhibits sperm production, leading to reduced sperm count, or even azoospermia of non-obstructive type. Sertoli cells, which are also important in the development of the sperm, are usually also affected, as the amount of their product, inhibin B, is usually lower in males with CAH. Sertoli cell dysfunction then contributes to testicular failure to produce sperm cells.

The second factor is the increased risk of testicular adrenal rest tumors (TART). These tumors arise from aberrant adrenal cells present in the testis that grow in number due to stimulation by ACTH. TART is a significant risk factor for both Leydig and Sertoli cell dysfunction, because it damages the testicular tissue due to its growth. Furthermore, the TART may obstruct the seminiferous tubules of the testis, which in turn may also lead to azoospermia.

The prognosis of 21-hydroxylase deficiency, the most common enzyme deficiency in CAH patients, is generally good with treatment. Only a small percentage of children and adults with infancy or childhood onset 21 hydroxylase deficiency die of adrenal crisis, even after diagnosis and initiation of treatment. With proper treatment, the progression of the diseases and future complications are prevented in the vast majority of patients, and they can lead a normal life. However, glucocorticoid needs are increased during illness and stress, which may require an increase in the administered medication doses. Furthermore, the condition negatively affects fertility and pregnancy rates in both males and females, and in severe forms may lead to infertility. 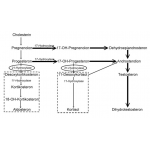 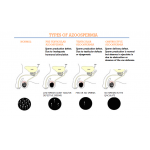