Occurrence of menstruation in 11 years or less.

About Early onset of menses

Early menarche was defined as occurrence of menarche at 11 years of age or less (the average age of menarche right now is around 12 to 13 years). Early menarche is likely the result of multiple influences on early endocrine development. Early onset menstruation, which follows precocious puberty, begins with the hypothalamus.

The early onset of pubertal development is an important medical and social problem, as it may result in increased morbidity and mortality in later life. Age at menarche (AAM) is one of the most significant traits, which is commonly used for retrospective epidemiological studies of female sexual maturation.

There are two major groups of interacting factors, which can influence AAM – genetic (such as the genes involved in estrogen biosynthesis) and nongenetic determinants. The data about the influence of environmental factors on AAM may be summarized using the SWOT (strengths, weaknesses, opportunities, and threats) approach (Pic. 1).

The contribution of genetic factors to AAM is estimated to be about 57–82%. Despite the apparently major role of genetic factors in AAM, environmental factors have gained increased attention, because many of them may potentially be controlled, which, in turn, may increase survival in later adulthood.

Puberty blockers, also called puberty inhibitors, puberty suppressors, or hormone suppressors, are a group of medications used to inhibit puberty. They were originally used to treat children with precocious puberty or other such early onset of puberty. Puberty blockers slow the growth of sexual organs and production of hormones. Most girls who have early puberty do not need treatment.

Earlier pubertal onset has been associated with increased anxiety as well as concerns with body shape, weight and the development of eating disorders . Moreover, in the absence of psychosocial maturity, exploratory behaviours that mark early adolescence may result in uninformed risk-taking behaviours.

Early maturers are more likely to adopt deviant behaviours including, for example, increased use and dependence on alcohol. In girls, such effects may result from association with deviant peers, older individuals and boyfriends. Mature appearance in girls at age 13 has also been related to a greater number of sexual partners by age 16 years. A high rate of partner change is associated with subsequent increased risks of sexually transmitted infections and early sexual initiation is associated with teenage pregnancy.

There is an association between early menarche and sexually transmitted infections. For example, among those with early menarche was associated with Chlamydial infection and human papilloma virus among sexually active adolescents.

Early menarche also is correlated with cardiovascular risk in adulthood and represents a significant risk for breast cancer.

A risk factor for early menarche can be childhood sexual abuse. The adverse impacts of biological father absence and the presence of non-related males in the home.

The most important part of a child's psychosocial environment is the family.

Physical activity may also be an effective way of preventing symptoms, and it has been shown to improve quality of life in women.

Experience shows that the treatment of children with precocious puberty using a puberty blockers not interfere with normal fertility.

An early puberty usually means a late menopause. In some women, menopause may bring about a sense of loss related to the end of fertility. During menopause with decline in ovarian function, thereby reducing the production of the hormones estrogen and progesterone. It stops the menstrual cycle and fertility loss is occurring - the woman is unable to conceive.

Women who experienced earlier menarche reported a younger preferred age to have a first child and showed stronger masculinity preferences. This provides evidence that women experiencing early menarche not only have children earlier but notably plan to have children earlier. Age of menarche influences partner selection, which is instrumental for the implementation of reproductive strategies.

As indicated above, early onset of menses is associated with the onset of menopause. Although menopause known as the end of the female reproductive period, fecundation not disappearing suddenly, but decreases gradually over time. 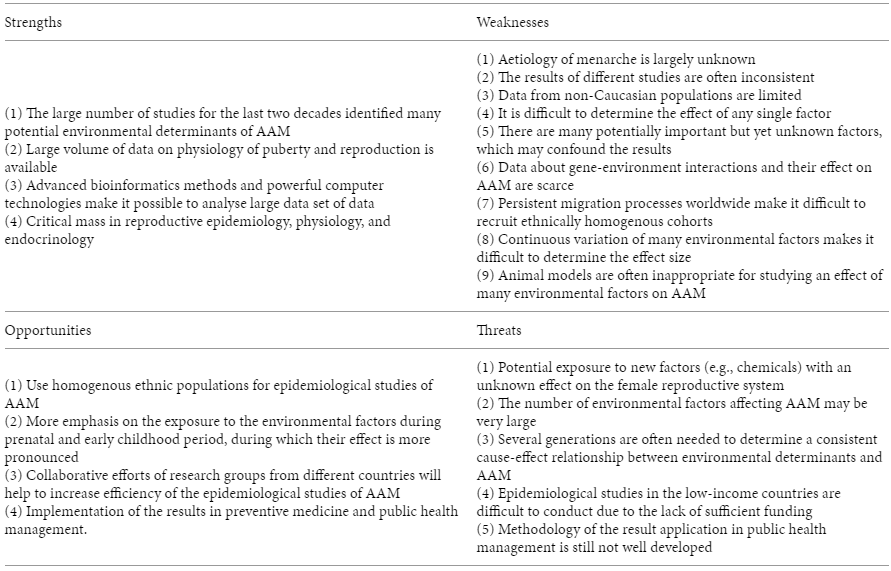 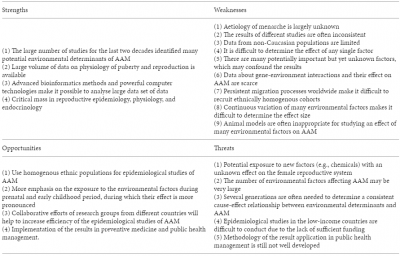