An ectopic pregnancy (Greek ektopos, or out of place), or eccysis, is a complication of pregnancy in which the embryo implants outside the uterine cavity. In a normal pregnancy, the fertilized egg enters the uterus and settles into the uterine lining where it has plenty of room to divide and grow. About 1% of pregnancies are in an ectopic location with implantation not occurring inside of the womb, and of these 98% occur in the Fallopian tubes (so-called tubal pregnancies), but implantation can also occur in the cervix, ovaries, and abdomen.

With rare exceptions, ectopic pregnancies are not viable. Furthermore, they are dangerous for the mother, since internal haemorrhage is a life-threatening complication. An ectopic pregnancy is a potential medical emergency, and, if not treated properly, can lead to death.

Detection of ectopic pregnancy in early gestation has been achieved mainly due to enhanced diagnostic capability. Despite all these notable successes in diagnostics and detection techniques ectopic pregnancy remains a source of serious maternal morbidity and mortality worldwide, especially in countries with poor prenatal care.

In a typical ectopic pregnancy, the embryo adheres to the lining of the fallopian tube and burrows into the tubal lining. Most commonly this invades vessels and will cause bleeding. This intratubal bleeding expels the implantation out of the tubal end as a tubal abortion. Tubal abortion is a common type of miscarriage. There is no inflammation of the tube in ectopic pregnancy. The pain is caused by prostaglandins released at the implantation site, and by free blood in the peritoneal cavity, which is a local irritant. Sometimes the bleeding might be heavy enough to threaten the health or life of the woman. Usually this degree of bleeding is due to delay in diagnosis, but sometimes, especially if the implantation is in the proximal tube (just before it enters the uterus), it may invade into the nearby Sampson artery, causing heavy bleeding earlier than usual.

If left untreated, about half of ectopic pregnancies will resolve without treatment. These are the tubal abortions. The advent of methotrexate (abortifacient) treatment for ectopic pregnancy has reduced the need for surgery; however, surgical intervention is still required in cases where the Fallopian tube has ruptured or is in danger of doing so. This intervention may be laparoscopic or through a larger incision, known as a laparotomy.

The vast majority of ectopic pregnancies implant in the Fallopian tube. Pregnancies can grow in the fimbrial end (5% of all ectopic pregnancies), the ampullary section (80%), the isthmus (12%), and the cornual and interstitial part of the tube (2%).Mortality of a tubal pregnancy at the isthmus or within the uterus (interstitial pregnancy) is higher as there is increased vascularity that may result more likely in sudden major internal hemorrhage. A review published (Shaw et al., 2010) supports the hypothesis that tubal ectopic pregnancy is caused by a combination of retention of the embryo within the fallopian tube due to impaired embryo-tubal transport and alterations in the tubal environment allowing early implantation to occur.

Two percent of ectopic pregnancies occur in the ovary, cervix, or are intraabdominal. Transvaginal ultrasound examination is usually able to detect a cervical pregnancy. An ovarian pregnancy is differentiated from a tubal pregnancy by the Spiegelberg criteria (four criteria used to identify ovarian ectopic pregnancies).While a fetus of ectopic pregnancy is typically not viable, very rarely, a live baby has been delivered from an abdominal pregnancy. In such a situation the placenta sits on the intraabdominal organs or the peritoneum and has found sufficient blood supply. This is generally bowel or mesentery, but other sites, such as the renal (kidney), liver or hepatic (liver) artery or even aorta have been described. Support to near viability has occasionally been described, but even in third world countries, the diagnosis is most commonly made at 16 to 20 weeks gestation. Such a fetus would have to be delivered by laparotomy. Maternal morbidity and mortality from extrauterine pregnancy are high as attempts to remove the placenta from the organs to which it is attached usually lead to uncontrollable bleeding from the attachment site. If the organ to which the placenta is attached is removable, such as a section of bowel, then the placenta should be removed together with that organ. This is such a rare occurrence that true data are unavailable and reliance must be made on anecdotal reports. However, the vast majority of abdominal pregnancies require intervention well before fetal viability because of the risk of hemorrhage.

A persistent ectopic pregnancy refers to the continuation of trophoplastic growth after a surgical intervention to remove an ectopic pregnancy. After a conservative procedure that attempts to preserve the affected fallopian tube such as a salpingotomy, in about 15-20% the major portion of the ectopic growth may have been removed, but some trophoblastic tissue, perhaps deeply embedded, has escaped removal and continues to grow, generating a new rise in hCG levels. After weeks this may lead to new clinical symptoms including bleeding. For this reason hCG levels may have to be monitored after removal of an ectopic pregnancy to assure their decline, also methotrexate (a cytostatic agent with proven anti-trophoblastic activity) can be given at the time of surgery prophylactically.

A ruptured ectopic pregnancy is one in which the fallopian tube gets torn or bursts and results in internal bleeding. In general ectopic pregnancy with ruptured symptoms represents an emergency gynecological condition requiring immediate medical treatment. Performing the major cause of maternal death among first trimester pregnancies. Although the mortality incidence decreases, the incidence of ectopic pregnancy is constantly increasing.

The most important tool in the diagnosis of heterotopic pregnancy represents the use high-resolution transvaginal ultrasonography. Symptoms of abdominal pain, rebound tenderness, fluid in the pouch of Douglas and severe anemia synthesize a condition compatible with tubal rupture or active bleeding. Such cases may endanger the life expectancy of the mother and the fetus.

Ectopic pregnancies are easily diagnosed clinically in a ruptured state but the diagnosis in an non-ruptured state is hard because there may be neither symptoms nor signs which can be elicited. So the diagnosis is usually made incidentally on ultrasonography but the findings may be sometimes false in diagnosing and assessing the gestational age. Ectopic pregnancy is a common and serious problem, with a significant morbidity rate and the potential for maternal death. The earlier diagnosis of unruptured ectopic pregnancy allows the use of more conservative treatment options. Medical treatment with methotrexate (MTX) has become a safe and effective means of treating ectopic pregnancy. Methotrexate, a folic acid antagonist, acts by inhibiting the metabolism of folic acid. Methotrexate stops the growth of rapidly dividing cells, such as embryonic, fetal, and early placenta cells. There are two commonly used MTX treatment protocols – single and multidose regimens. With proper patient selection, success rate approach 90%.
CHRONIC ECTOPIC PREGNANCY

Early symptoms are either absent or subtle. Clinical presentation of ectopic pregnancy occurs at a mean of 7.2 weeks after the last normal menstrual period, with a range of 4 to 8 weeks. Later presentations are more common in communities deprived of modern diagnostic ability.

More severe internal bleeding may cause:

Patients with a late ectopic pregnancy typically experience pain and bleeding. This bleeding will be both vaginal and internal and has two discrete pathophysiologic mechanisms:

You cannot prevent ectopic pregnancy, but you can prevent serious complications with early diagnosis and treatment. Prevention is by decreasing risk factors such as chlamydia infections through screening and treatment.
Complications

The most common complication is rupture with internal bleeding which may lead to hypovolemic shock. Death from rupture is still the leading cause of death in the first trimester of the pregnancy.
An ectopic pregnancy is a potential medical emergency, and, if not treated properly, can lead to death.

After an ectopic pregnancy (EP) fertility decreases, mostly due to tubal factor. Future fertility in these patients is dependent on several factors, including age, history of infertility, history of previous EP, tubal rupture, and contralateral tubal lesion. The treatment choice does not play a major role; a randomized study by Fernandez H et al., in 2013 concluded that the rates of intrauterine pregnancy 2 years after treatment of ectopic pregnancy are approximately 64% with radical surgery, 67% with medication, and 70% with conservative surgery. In comparison, the cumulative pregnancy rate of women under 40 years of age in the general population over 2 years is over 90%.

When ectopic pregnancies are treated, the prognosis for the mother is very good. Maternal death is rare, but most fetuses die or are aborted.

Fertility following ectopic pregnancy depends upon several factors, the most important of which is a prior history of infertility. The treatment choice does not play a major role.The rates of intrauterine pregnancy 2 years after treatment of ectopic pregnancy are approximately 64% with radical surgery, 67% with medication, and 70% with conservative surgery. In comparison, the cumulative pregnancy rate of women under 40 years of age in the general population over 2 years is over 90%. 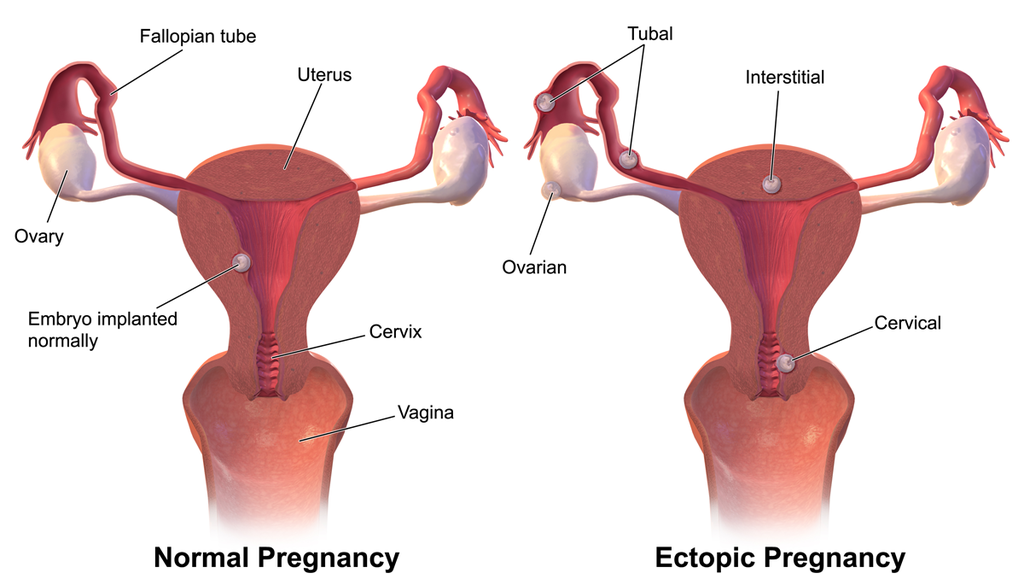 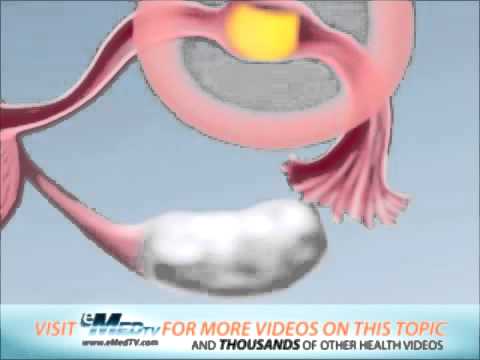 An acute inflammation of the fallopian tubes. 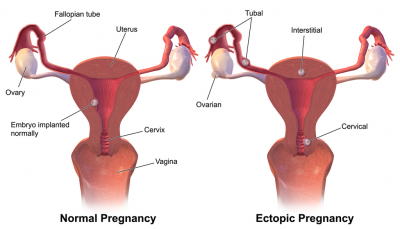 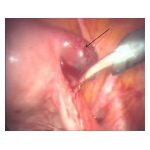 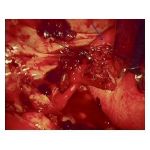