A physiological response to a trigger from the environment causing stress and possibly altering balance of sex hormones.

Emotional stress is referred as a physiological response to a trigger from the environment and a crucially one‘s perception of it. Signs of stress can be in the form of feeling vulnerable and tense.

Emotional wellbeing is dependent on ones control over stress, as stress can be seen as a challenge instead of a threat. When one lacks this sense of control, stress can be bad news, causing health issues and community concerns. When humans are exposed to “stressors” such as excessive demands, over stimulation, financial hardship, under stimulation and broken relationships, most people experience negative emotional reactions that effect our emotional wellbeing such as; anxiety, depression, uneasiness, apathy, alienation, and hypochondriasis (a condition in which a person is excessively and unduly worried about having a serious illness). These negative emotional reactions affecting emotional wellbeing can also contribute to behavioral reactions.

Stress, believe it or not, impacts one’s self esteem and emotional wellbeing by allowing thoughts of failure and anxiety to take control of their thoughts in threatening or stressful situations. Low self-esteem contributes to a lack of coping abilities when one is confronted with stressors. When self-esteem is low, the ability to deal with stressful situations diminishes, as individuals believe they cannot do anything ‘right’ to escape the situation or avoid it in the future. Low self-esteem shares a close relationship with such mental illnesses and disorders as depression and anxiety. It is when self-esteem arrives at such a low point that a person must seek professional help or advice.

Many infertile women believe that emotional distress (for example, tension or worry) is a contributing factor to their lack of natural fertility and lack of success with fertility treatment because increased levels of stress hormones could interfere fertility as well as fetus development. These beliefs are usually based on anecdotal evidence and oft repeated fertility myths of spontaneous conception after holidays (“relax and you’ll get pregnant”) or after adoption when couples no longer have the strain of trying to conceive (“don’t think about it and you’ll get pregnant”). In contrast, doctors tend to consider the contribution of stress to be negligible because of inconclusive results in the empirical literature.

Assisted reproductive technologies (ART) like in vitro fertilization (IVF) and intra-cytoplasmic sperm injection (ICSI) are complex and stressful, and are therefore the subject of many studies investigating emotional distress and outcome of fertility treatment.

Patients expect assisted reproductive technologies to be stressful, and 30% of couples end treatment prematurely because of its psychological burden. The contribution of biological, reproductive, and lifestyle factors to the success or failure of fertility treatment is well established, but the influence of emotional distress is inconclusive because of mixed results in psychosocial studies.

Emotional stress could be managed with cognitive behavioral therapy (CBT). Simply by talking about infertility with a psychologist, especially the cause is unknown, can surface emotions such as guilt, stress, psychosomatic complaints, or even incompatibility in the partnership. It can also help combat self-regulation and self-discrepancy issues as previously discussed. It has been found that psychological and psychiatric intervention for infertile patients increased pregnancy rate for couples experiencing intervention by 47.1% compared to 7.1% in control group who did not have therapy, emphasizing that when stress levels drop pregnancy rates can rise.

The lengths of depressive episodes vary depending on each individual case. Some may last up to 2 weeks, with others lasting several years or for their entire life. Although some people may suffer from depression their entire life, due to hereditary reasons, many can recover from this state with the help of ongoing psychological treatment and medicinal products.

PTSD can be subdivided into acute and chronic and cannot be diagnosed until a month after the traumatic event. Acute PTSD can be diagnosed a month after the traumatic event and is associated with mild avoidance behaviours. When PTSD continues over 3 months and longer it is considered to be chronic. Chronic PTSD is also associated with more dominant avoidance behaviours.

Anxiety is a negative mood state characterised by physical symptoms such as tension and apprehension about future events. Like stress, anxiety is necessary for human performance, as long as it is controlled and does not overwhelm emotional state. Anxiety is hard to study in humans, as it can be brought on by many contributing factors and can be expressed by facial expressions, biological factors, and behavioural changes. Anxiety is a very complex issue and is becoming more difficult to determine as research continues.

Stress affected people might start smoking or overeating, find comfort in alcohol, and take unnecessary risks at work. Stress not only affects ones psychological health but also initiates a physiological reaction in body, which can cause serious health issues.

A coordinated and complex set of physiological changes is generated during acute stress sessions. Changes in the autonomic nervous system activity promote immediate responses during aversive threats, which are mainly characterized by changes in the cardiovascular function. Cardiovascular responses typically consist of increase in blood pressure, heart rate (HR), and cardiac output. However, these responses are consequences of more complex changes in cardiovascular function (blood flow redistribution, changes of cardiac autonomic activity, and modulation of baroreflex function observed during an acute stress session).

According to conventional wisdom, gestational stress (Pic. 1) increases the risk of pregnancy miscarriages and predisposes the mother to perinatal infections, premature labor, hemorrhages and preeclampsia (high blood pressure and protein in urine during pregnancy). Children are also presumed to be negatively affected by prenatal stress since it predisposes them to develop mood disorders, attention deficit disorder, perinatal infections, and obesity at early ages and cancer and/or degenerative disorders in adulthood (e.g., cardiovascular disease, cancer, diabetes, obesity, and behavioral, cognitive, and mood disorders).

People higher at risk are those who are highly competitive, over achieving type personalities, impatient, and those who try to fit in more and complete more in less time and who also do not make time for relaxation and periods of rest. When someone displays low level of self-esteem they are more likely to have negative thoughts about their abilities with education, self appearance and self confidence.

Becoming a parent is a major social role in life and the stress of not being able to achieve this can lead to emotional consequences such as anger, depression, anxiety, feelings of inadequacy, problems with sex life and marital problems. Significantly poorer fertility outcomes are found in couples who exhibit high psychological stress. Meta-analysis examining mental health and pregnancy rate demonstrated psychological interventions improved some patients’ likelihood of becoming pregnant. These interventions signify an appealing treatment possibility, for infertile patients who are not receiving medical treatment.

Couples may experience different levels of infertility related stress dependent upon couple and individual resources such as communication, relationship strength prior to infertility and religiosity/spirituality. In the infertile partnership, women often exhibit greater levels of distress than men. Previous research has found that infertile women who experience pressure of rejection from husbands and family experience greater levels of distress. A couples difficulty in communicating can contribute to infertility related stress, which reinforces the need for cognitive behavioral therapy.

Couples who find they are unable to conceive are often sent for diagnostic testing to find if there is a specific medical reason. Medical treatment for infertility however has great medical and psychosocial costs. Studies find not only psychological distress related to infertility but also the assisted reproductive technology (ART) demonstrating negative short-term effect on mental distress levels.

High levels of anxiety and distress have been linked with reduced odds of achieving a successful pregnancy based on ART. In vitro fertilization (IVF), has become a popular technique for women who are unable to obtain natural pregnancies. However previous research has found that IVF women do not display greatly more distress than fertile women.

Psychological stress has been the most common reason for people to give up on IVF. Demanding schedules requiring drugs and invasive procedures cause mood instability, which leaders to further relationship stress and conflict. However, women who achieve a successful IVF pregnancy demonstrate that all negative emotions disappear, proving that stress is linked with fears of failure.

Avoiding stress is not always easy. As humans cannot get rid of stress they must find ways around it, by taking control. Firstly one needs to recognize and see what stress is to them, and how it affects them individually.

To increase resilience to stressors:

Up until now in cross-sectional studies investigating psychological and social reasons are unclear if stress causes infertility or infertility causes stress.

Stress triggers the hypothalamic-pituitary-adrenal axis (Pic. 2), which upregulates hormones that are needed to remain balanced in order for the female reproductive system to function optimally, as increased levels of these stress hormones can interfere with the timing of ovulation, shorten the luteal phase, lessen the chance of implantation, or lead to miscarriage. Stress significantly decreases the chances of conception during the fertile period.

Emotional stress would likely exert its effect on the chance of pregnancy by compromising ovarian function or implantation, because stress induced suppression in these phases of the reproductive event is physiologically less costly than disruptions at a later point in pregnancy.

It is also possible that fallopian tubes are blocked only some of the time. Such type of blockage is referred as a “functional blockage”. This scenario is typical in women who experience a lot of stress. Stress tends to constrict pelvic musculature and decrease blood flow and this can be an important factor in inability to conceive.

In the United States studies have found that infertile males experience greater sexual stress, lower satisfaction and greater erectile dysfunction. Inferior semen quality has been identified in males under stress, which is known to result in infertility or pregnancy resulting in miscarriage. According to the psychodynamic theory, women that use a sperm donor due to their partners incompetent sperm can cause significant emotional irritation.

The fleeting periods of impotence and sexual performance anxiety could possibly contribute to the reason for infertility. Studies demonstrate men who are solely to blame for infertility in partnership feel less powerful in their lives, in their ability to meet aspirations. They hold themselves personally accountable for their fertility problems, and negative sexual consequences and emotions. This highlights that because a man is stressed that he cannot impregnate his partner, decrementing his fertility.

Research has found that stress has been found to be harmful for achieving successful human reproduction, and found that couples who enrolled in stress reduction techniques, demonstrated improved IVF or had spontaneous conceptions after adopting a child. 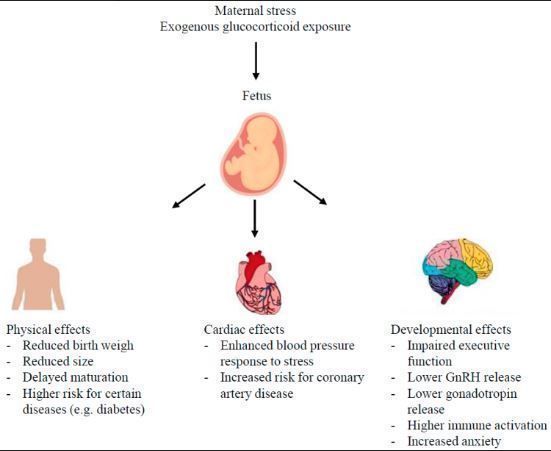 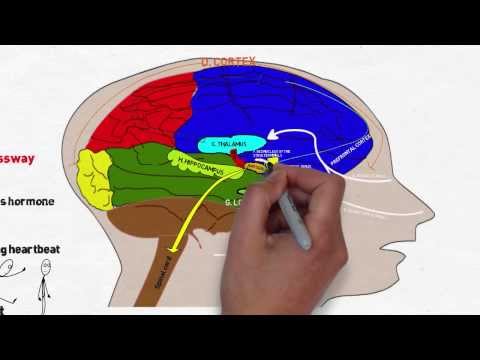 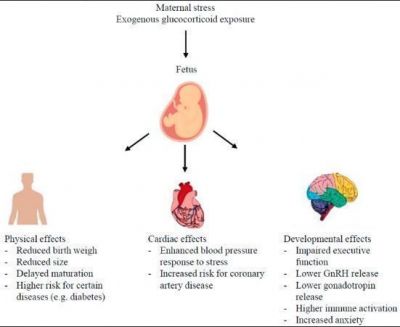 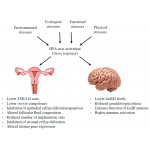