Genetic characteristic which influences the possible development of obesity.

About Genetic predisposition to obesity

Genetic predisposition to obesity is characteristic which influences the possible development of obesity in people who carry genes associated with obesity. Genetic factors are estimated to account for >40% of the population variation in body mass index (BMI, the weight in kilograms divided by the square of the height in meters). Thus, genes influence how bodies capture, store, and release energy from food.

One of the intriguing explanations for the rapid rise in obesity is the mismatch between today’s environment and “energy thrifty genes” that multiplied in the past under different environmental conditions when food sources were rather scarce. In other words, according to the “thrifty genotype” hypothesis, environments in which food is plentiful year around are now challenging the same genes that helped our ancestors survive occasional famines.

It has been argued that the thrifty genotype (complete heritable genetic identity) is just part of a wider spectrum of ways in which genes can favor fat accumulation in a given environment. These ways include the desire to overeat; the tendency to be sedentary; a diminished ability to utilize dietary fats as fuel; an enlarged, easily stimulated capacity to store body fat.

The variation in how people respond to the same environmental conditions is an indication that genes play an important role in the development of obesity. This is also consistent with the notion that obesity results from genetic variation interacting with shifting environmental conditions (Pic. 1). Recent advances in genetic epidemiological approaches have identified several genetic loci for obesity.

At least 32 genes contribute to common forms of obesity. A number of these have also been confirmed as contributors to pediatric obesity. Many of these genes are thought to be related to the development of obesity through the dysregulation of leptin (leptin reduces food intake and body weight) or other metabolic hormones in the body. However, a majority of the newly discovered genes are expressed in the brain, emphasizing the role of the central nervous system in obesity risk.

Nutritional genomics is an emerging field that may improve dietary guidelines for chronic disease prevention. It covers both nutrigenomics and nutrigenetics. Nutrigenomics explores the effects of nutrients or other dietary factors on the gene, while nutrigenetics is aimed to elucidate whether genetic variations modify the relationships between dietary factors and risk of diseases. Nutrigenetics has the potential to provide scientific evidence for personalized dietary recommendations based on the individual’s genetic makeup for weight control.

In epidemiology, interaction is defined by estimating whether the degree of risk attributable to the joint effects of a genotype and an environmental factor on an outcome is greater or less than would be expected if these joint effects were added. Alternatively, GEI exists where the risk conveyed by specific genotype depends on one or more environmental exposure levels. This definition is quite helpful in the context of intervention studies where the environmental exposures can be intervened upon, such as diet and physical activity, to offset genetic risk. Nutrigenetics is a special area of GEI research, where the environmental exposure is consumption of specific foods or nutrients. Looking from a different perspective, nutrigenetic studies also assess whether genetic factors modify the effects of specific dietary factors on diseases or related traits.

According to recent studies, individuals carrying the at-risk allele (a variant form of a given gene) prefer energy dense food, have reduced feelings of satiety, display loss of control over eating (hyperphagia), consume more fat and calories (even after adjusting for BMI), and display a greater tendency towards consuming palatable foods after eating a meal.

Overweight and obesity, defined BMI >25 and >30, respectively, are associated with premature death through increased risk of many chronic diseases, including type 2 diabetes, cardiovascular disease, and cancer. Obesity is a major international public health threat and economic burden.

In addition to common forms of obesity, several rare, monogenic forms of obesity, referred to respective mutations are sufficient by themselves to cause the condition in food abundant societies, have been described including Prader-Willi syndrome (complex genetic condition that is characterized by weak muscle tone (hypotonia), feeding difficulties, poor growth, and delayed development) and Bardet-Biedl syndrome (genetic condition characterized by visual loss, obesity, kidney dysfunction).

Complications are either directly caused by obesity or indirectly related through mechanisms sharing a common cause such as a poor diet or a sedentary lifestyle. The strength of the link between obesity and specific conditions varies.

A genetic component for obesity is reflected in prevalence differences between racial groups, from 5% or less in Caucasian and Asian populations to 50% or more among Pima Indians and South Sea Island populations.

Gender can be assimilated as a specific environmental condition. Females are at higher risk of developing morbid obesity than males. These discrepancies could be explained in part by female-specific genetic associations or by stronger effect sizes of genetic variants in females.

In addition, the familial occurrences of obesity have been long noted with the concordance for fat mass among monozygotic twins (single egg is fertilized to form one zygote which then divides into two separate embryos) reported to be 70–90%, higher than the 35–45% concordance in dizygotic twins (occur when two fertilized eggs are implanted in the uterus wall at the same time); as such, the estimated heritability of BMI ranges from 30 to 70%.

Findings to date indicate that behavioral changes such as improving diet and physical activity can substantially offset obesogenic effects of risk alleles (variant form of a gene), which has much broader clinical and public health implications.

As hyperphagia (excessive hunger or increased appetite) is a common feature of monogenic obesity (rare and severe early-onset obesity with abnormal feeding behavior and endocrine disorders), the most effective preventive strategy may be stringent restriction of food access. This will require training and active participation of the parents and care providers and the identification of critical environmental components (physical activity, rural / urban environment, dietary profile, family structure, socioeconomic status, social network, psychosocial stress) that modulate the penetrance of obesity associated with pathogenic mutations in order to avoid unhealthy environments for these subjects.

Even significant evidence for linkage between obesity and female fertility were found, the clear mechanism have not been found yet.

Association between obesity and infertility

Obesity leads to infertility in both men and women. This is primarily due to excess estrogen (female sex hormones) interfering with normal ovulation in women and altering spermatogenesis (sperm production) in men. It is believed to cause 6%of primary infertility.

Obesity was found to be associated with female infertility. The most frequent anovulatory cycles (cycles without ovulation) are related to polycystic ovary syndrome (PCOS) occurrence, commonly associated with obesity and hormonal disturbances in the course of obesity.

Obesity was also found to be associated with male infertility related to erectile dysfunction, hormonal disturbances and a reduction in sperm count and quality.

Erectile dysfunction (ED), a kind of male sexual dysfunction, is characterized by the inability to achieve or maintain erections of the penis potent for satisfaction during sexual activity1. Even though ED is not a fatal condition, it interferes with daily routine, social interactions and quality of life of the patient. The risk factors of erectile dysfunction include obesity grade, visceral obesity, low testosterone level, and physical inactivity.

Adults who are physically active could attenuate the odds of obesity. Thus carrying a gene for obesity does not necessarily predestine one to become obese but, rather, increases one’s risk in the face of an obesogenic environment. Unfortunately, this attenuation of obesity risk via physical activity was not seen in children. Nevertheless, taken together, these results suggest that interventions targeting food availability or physical activity may mitigate the increased genetic risk.

In the near future, individuals may be able to obtain their comprehensive genetic information and thus knowledge of their genetic predisposition to obesity and other chronic diseases. Nutritional genetics studies have made slow but steady progress in examining gene and dietary intervention interactions for weight loss and maintenance, but there are still many challenges. 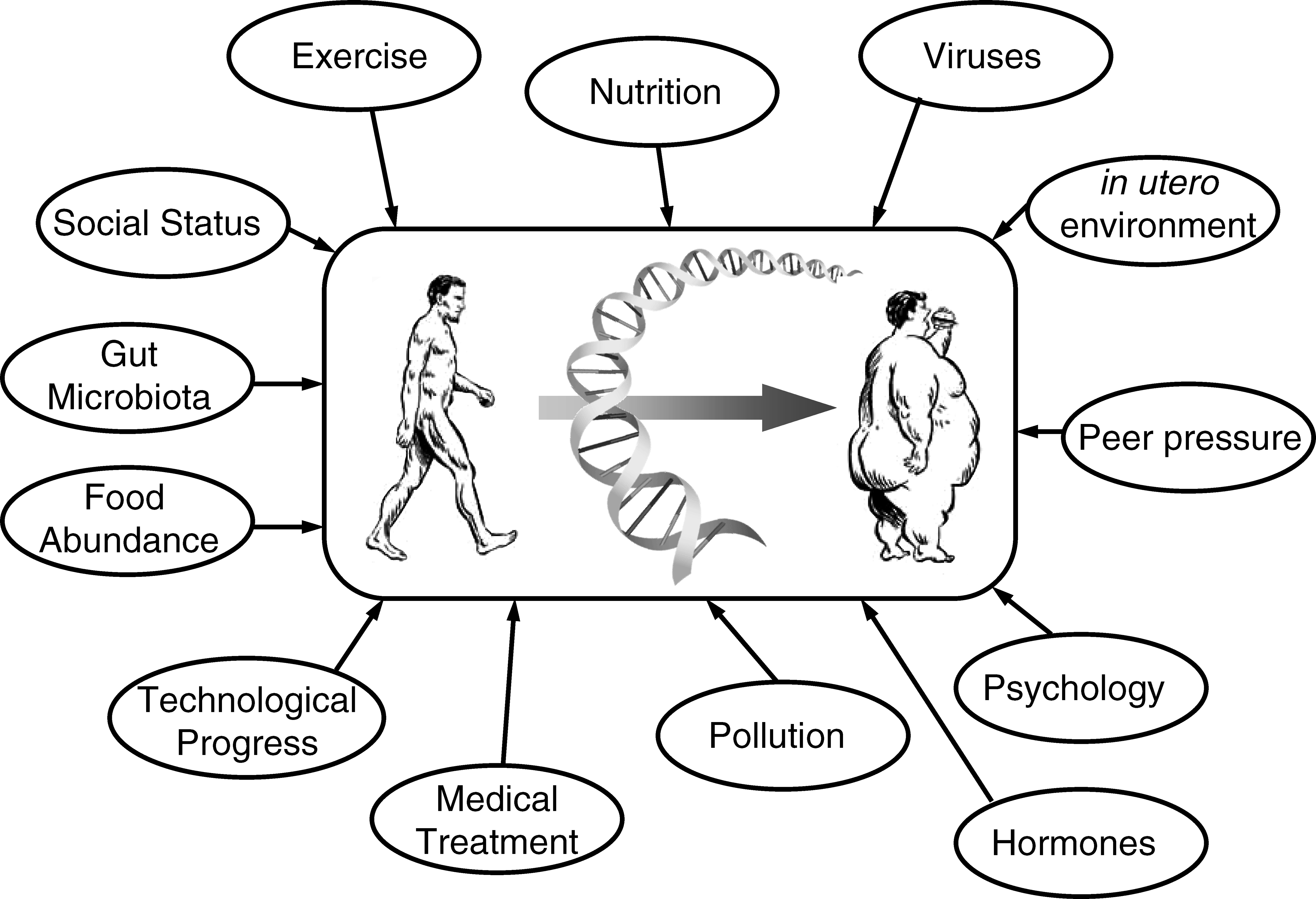 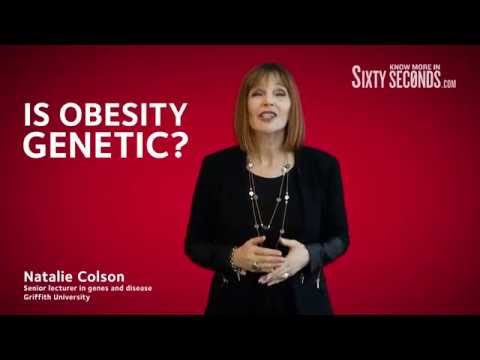 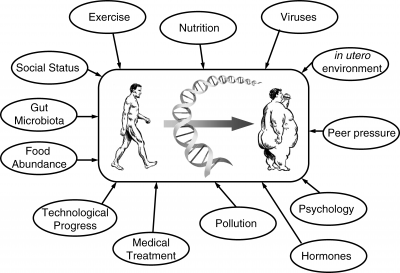