The toxic effect of certain metals in certain forms and doses on life.

Heavy metals include metals such as lead, mercury, boron, aluminum, cadmium, arsenic, antimony, cobalt, and lithium. Only a few such heavy metals have been researched in connection to reproductive function. People are continually exposed to metals in the environment. Medical tests can detect metals often, but this is to be expected and alone is not evidence that a person is poisoned. Metal screening tests should not be used unless there is reason to believe that a person has had excessive exposure to metals. People should seek medical testing for poisoning only if they are concerned for a particular reason, and physicians should consider a patient's history and physical examination before conducting tests to detect metals.

An option for treatment of metal poisoning may be chelation therapy, which is a technique which involves the administration of chelation agents to remove metals from the body. Chelating agents are molecules that have multiple electron-donating groups, which can form stable coordination complexes with metal ions. Complexation prevents the metal ions from reacting with molecules in the body, and enable them to be dissolved in blood and eliminated in urine. It should only be used in people who have a diagnosis of metal intoxication. Chelation therapy is administered under very careful medical supervision due to various inherent risks. When the therapy is administered properly, the chelation drugs have significant side effects. Chelation administered inappropriately can cause neurodevelopmental toxicity, increase risk of developing cancer, and cause death; chelation also removes essential metal elements and requires measures to prevent their loss.

Lead (Pb), which is commonly found in batteries, metal products, paints, ceramics, and pipes, is one of the most prominent heavy metals. Environmental and occupational exposure to lead have been associated with increasing number of diagnosed fertility impairments. Lead interrupts the hypothalamic-pituitary axis and has been reported to alter hormone levels, alter the onset of puberty, and decrease overall fertility. Lead may alter sperm quality in men, and cause irregular menstruation, induce preterm delivery, and cause miscarriage, stillbirth, and spontaneous abortion in women. Chronic exposure to lead can also induce functional disorder (decrease of testosterone synthesis) or morphological disorder.

Boron (B) is another heavy metal that is used in the manufacturing of glass, cement, soap, carpet, and leather; its effects on the hypothalamic-pituitary axis are comparable to lead.

Chronic exposure to heavy metals such as As (arsenic) may also affect sperm quality. Trace amounts of As have been observed in semen which suggests that it may inhibit the function of enzymes present in the acrosome and the membrane which covers the head of the sperm.

While there is not much research on cadmium (Cd), it has been shown experimentally to cause testicular necrosis in mice, as well as marked changes in libido and infertility. Heavy metal toxicity has been associated with male infertility, reproductive disorder, reduced spermatogenesis, and so forth. Cd in combination with other heavy metals such as Cr (chromium), As (arsenic), and Pb (lead) may account for decreased male fertility rate in the developed countries observed by reduced sperm counts and testis function.

Many of the chemicals used world-wide in today’s society, including pesticides and endocrine disruptors, among others, may have various damaging effects on the reproductive health of both men and women. Eliminating every exposure is unrealistic; however, identifying, eliminating, or minimizing even one factor may have significant positive effects on fertility for both men and women. 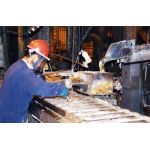