About Low level of AMH

Low level of AMH (Anti-Müllerian hormone) is a condition of blood levels of AMH below the lower limit of the reference range (Pic. 1) AMH levels ranging from 1.5 to 4.0 ng/ml are considered normal and indicate good fertility. Levels ranging from 1.0 to 1.5 ng/ml are considered slightly decreased and may indicate a decline in ovarian reserve (the amount of resting oocytes and their ovarian follicles in the ovaries), but are still associated with good outcomes. Levels below 0.5 ng/ml are indicative of very poor ovarian reserve and reduced fertility. Low level of AMH is associated with several conditions of reduced fertility, both in females and males.

Anti-Müllerian hormone, or Müllerian-inhibiting hormone, is a glycoprotein hormone that has key roles in embryonal growth, differentiation, and in regulation of folliculogenesis (growth and development of ovarian follicles). In females, AMH is secreted by granulosa cells of small follicles in the ovary (Pic. 2). Serum values are almost undetectable during infancy and then rapidly increase with the onset of puberty, reflecting the initial recruitment of primordial follicles. AMH is produced in growing follicles until they reach a stage when dominant follicle is detached from a cohort of antral follicles.

The measurement of serum AMH levels during woman’s reproductive life represents an ideal tool for the assessment of the ovarian follicular reserve. The advantage of AMH in relation to the ovarian steroid hormones is that serum levels do not fluctuate significantly during the menstrual cycle. The strong correlation of AMH with the number of growing follicles is supported by the fact that its levels are reported very high in ovarian tumours and in polycystic ovaries, while undetectable levels are testified in postmenopausal women and Turner syndrome patients without gonadal tissue. As the number and quality of the oocytes diminish throughout the woman’s reproductive life, serum concentrations of AMH gradually decrease and fall below detectable levels in menopause.

In the last years, the measurement of anti-Müllerian hormone has been used as an informative marker of the ovarian reserve. In healthy women, AMH measurement is useful for the determination of the reproductive life span and the time of future menopause. Low level of AMH is in relation to early menopausal state and decreased ovarian reserve. Serum level of AMH decreases or cannot be detected in patients with POF (premature ovarian failure, Pic. 3).

In males, AMH plays a fundamental role in the regression of Müllerian ducts in male embryo. In its absence, Müllerian ducts develop into female inner reproductive organs. In boys, it is significantly produced in Sertoli cells of testes until puberty and then slowly decreases to residual values for the rest of the men’s life. AMH serves as a biochemical marker of the presence of testes in cryptorchidic males (patients without their testes present in the scrotum). Low values of AMH in boys with non-palpable testes are indicative of absence of testicular tissue in the body (see Associated diseases).

In women with low AMH due to premature ovarian insufficiency or failure, cyclical hormone replacement therapy with estrogens and progestins should be administered. Estrogens are needed to maintain bone density and prevent other menopause-like adverse effects. Progestins need to be administered cyclically to prevent endometrial hyperplasia and other side effects of unopposed estrogen. Hormone therapy may even improve fertility in young women with premature ovarian insufficiency, and it is reported that they may have 5-10% chance of spontaneous pregnancy. When fertility has been lost, there are currently no interventions proven of being able to reverse it. Women with premature ovarian failure may consider IVF (in vitro fertilization) with donated eggs.

Low level of AMH is detected only biochemically by measuring the serum concentration of circulating AMH. Symptoms leading the physician to measure the AMH level may include infertility and other associated signs of premature ovarian failure, such as amenorrhea (absence of menstrual cycles), osteoporosis and symptoms mimicking menopause. Low level of AMH can also be found in Turner syndrome patients, who present with typically short stature, broad chest, webbed neck (Pic. 4), increased weight, characteristic facial features, various malformations of inner organs and amenorrhea due to complete absence of functional ovarian tissue.

Premature ovarian failure (POF) is defined as a primary ovarian defect characterized by absent menarche (primary amenorrhea) or premature depletion of ovarian follicles/arrested folliculogenesis before the age of 40 years (secondary amenorrhea). Hormonally, POF is defined by abnormally low levels of estrogen and high levels of FSH (follicle-stimulating hormone, a hormone secreted by the pituitary to stimulate the ovary during the first half of the menstrual cycle), which demonstrate that the ovaries are no longer responding to circulating FSH by producing estrogen and developing fertile eggs. The ovaries will likely appear shrivelled.

The cause of POF is usually unknown (idiopathic). Some cases of POF are attributed to autoimmune disorders, others to genetic disorders such as Turner syndrome. If it has a genetic cause, it may be called gonadal dysgenesis. Also, certain chemotherapy and radiation treatments for cancer are highly gonadotoxic (toxic to the germinal cells within the gonads) and may cause irreversible damage to the reproductive capacity of the ovary.

Turner's syndrome (TS; Pic. 4) is a genetic disorder that affects only females. Turner syndrome is caused by a chromosomal abnormality in which all or part of one of the X chromosomes is missing or altered. Signs and symptoms vary among those affected. Heart defects, diabetes, and low thyroid hormone occur more frequently. Most people with TS have normal intelligence. Vision and hearing problems occur more often. Women with Turner syndrome are almost universally infertile since TS is characterized by primary amenorrhoea, premature ovarian failure and streak gonads (gonads composed entirely of fibrous tissue).

When a child is born with ambiguous genitalia or bilaterally absent testes, the determination of the presence or absence of testicular tissue is of utmost importance in terms of treatment and management options. A serum AMH concentration within the normal male reference range is highly indicative of testicular tissue. In patients with ambiguous genitalia or cryptorchidism, a low or undetectable AMH concentration is conversely indicative of dysgenetic testicular tissue, anorchia or ovarian tissue. AMH can thus be used to distinguish between anorchia and cryptorchidism in patients without palpable testes.

Low level of AMH is usually associated with conditions that impair fertility both in females and males. In cases of premature ovarian failure, AMH levels can serve to detect reduced ovarian reserve before complete infertility occurs. In cases of Turner syndrome (in females) and complete anorchia (in males), the patient is usually infertile from birth due to complete absence of functional gonadal tissue.

Risk factors that a patient will present with low AMH level include:

Low level of AMH is usually the consequence of certain conditions, therefore, preventing these conditions, if possible, also prevents the AMH level from decreasing. Turner syndrome is a genetic condition and is therefore present from birth, but it may be diagnosed during pregnancy. Usually, fetuses with Turner syndrome can be identified by abnormal ultrasound findings, and the diagnosis can be confirmed by amniocentesis or chorionic villi sampling.

Cause of premature ovarian failure is most frequently idiopathic (unknown), but in cases of POF attributable to autoimmune diseases or damage to ovarian tissue by chemotherapy or radiation treatment, some prevention of the ovarian failure is possible. One of the benefits of AMH serum level measurement is to identify patients with risk factors of POF such as family history of POF, history of chemotherapy and radiation to pelvic region, and history of autoimmune diseases. Early detection of ovarian storage and numbers of primordial follicles decline can be used for prevention of infertility and preserving the remaining follicles.

Serum level of AMH is associated better with a decline of oocytes/follicles over time. AMH serum level can be measured at any time of cycle and the serum level is not affected by consumption of oral contraceptive pills (OCP), against serum level of FSH and other markers. Premature ovarian failure is one of the causes of infertility which is described as a decline in ovarian function and ovarian response to FSH and reduction of estrogen level. POF occurs before forth decade of life - earlier than physiologic menopause that occurs in fifth decade of life, and is similarly associated with lowered or undetectable levels of AMH.

In males, AMH level rises until puberty and then steadily declines for the rest of the patient’s life. Low or undetectable AMH levels in young boys with non-palpable testes may indicate absence of testicular tissue, a condition known as anorchia, which leads to infertility. No functional testicular tissue in the body means that the male is not able to produce sperm, and is therefore infertile.

Comparison of an individual's AMH level with respect to average levels is also useful in fertility assessment, as it provides a guide to ovarian reserve and identifies women that may need to consider either egg freezing or trying for a pregnancy sooner rather than later if their long-term future fertility is poor.

For patients seeking IVF treatment, low AMH may be predictive of poorer response, as fewer of their eggs can be produced in their ovaries. Patients with AMH levels of 1.0 ng/ml are reported to have success rate of IVF cycles about 10%. Levels of AMH below 0.5 ng/ml are associated with very low success rates and these patients should consider using donor eggs.

AMH has been synthesized. Its ability to inhibit growth of tissue derived from the Müllerian ducts has raised hopes of usefulness in the treatment of a variety of medical conditions including endometriosis, adenomyosis, and uterine cancer. Research is underway in several laboratories. If there were more standardized AMH assays, it could potentially be used as a biomarker of polycystic ovary syndrome. 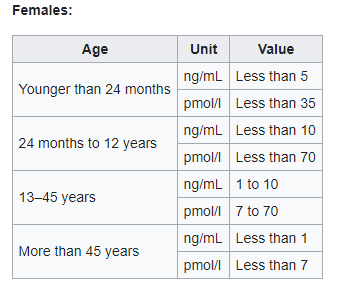 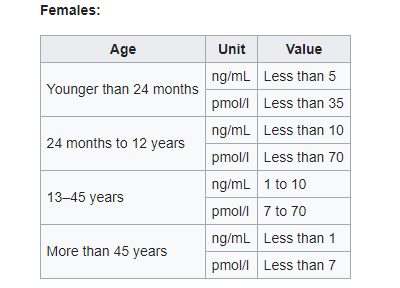 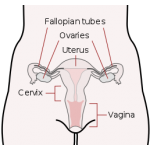 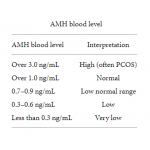 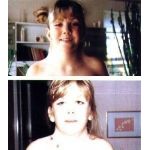