A syndrome which is characterized by the enlargement of ovarian cysts and an acute fluid shift into the space outside the vessels.

The ovarian hyperstimulation syndrome (OHSS) is the combination of increased ovarian volume, due to the presence of multiple cysts and vascular hyperpermeability which means that the blood vessel wall allows molecules to flow in and out of the vessel. The result is the outflow of fluid from the vessels (a part of the circulatory system and function to transport blood throughout the body), with subsequent decresion of blood pressure and blood became more concentrate due to increased concentration of cells and solids. Early OHSS develops before pregnancy testing and late OHSS is seen in early pregnancy.

Ovarian hyperstimulation syndrome (OHSS) is a rare and potentially life-threatening complication of ovarian stimulation (Pic. 1). OHSS can be spontaneous but in almost all cases it is an iatrogenic complication (resulting from the activity of a health care provider or institution). In general, spontaneous OHSS develops between 8 and 14 weeks of amenorrhoea (the absence of a menstrual period in a woman of reproductive age), which differ from iatrogenic OHSS that usually start between 3-5 weeks of amenorrhoea.

Spontaneous forms of OHSS are extremely rare and always seen during pregnancy. A number of cases have been seen during multiple pregnancies or hydatidiform moles (an abnormal form of pregnancy in which a non-viable fertilized egg implants in the uterus and will fail to come to term), which are reported to be associated with abnormally high values of hCG (human chorionic gonadotropin).

During ART treatments, controlled ovarian stimulation leads to multiple oocytes and supra-physiological levels of estrogens. Ovarian hyperstimulation syndrome is an excessive response to controlled ovarian hyperstimulation during treatment cycles either using in-vitro fertilization (IVF) or intracytoplasmic sperm injection (ICSI), being the most important iatrogenic complication of the treatment stimulation protocol. As many as 33% of in vitro fertilization (IVF) cycles have been reported to be associated with mild forms of OHSS. More severe OHSS has been reported in 3.1–8.0% of IVF cycles. OHSS is common, occurring in mild forms in 33% of IVF cycles and in moderate or severe forms in 3% to 8% of IVF cycles. Although it can occur in all age groups, it is less common in women over the age of 39 years.

The OHSS can be classified in severe and critical based on the gravity of signs, symptoms, laboratory tests and ultrasound findings.

Criteria for severe OHSS include:

Mild OHSS can resolve on its own. The treatment of moderate forms involve painkillers. Doctors require more frequent physical examination and ultrasound, also it is necessary to measure how much urine women produce each day and the changes in her weight. Adequate fluid intake is also necessary and in case of ascites the fluid deeds to be draine with a needle inserted in your abdomen. Severe types of OHSS requires a hospitalization and monitoring with aggressive treatment with intravenous fluids and GnRH (gonadotropin-releasing hormone) antagonist, which help to supress ovarian activity.

Symptoms are set into 3 categories: mild, moderate, and severe.

Severe symptoms are fullness/bloating above the waist, shortness of breath, pleural effusion, urination significantly darker or has ceased, calf and chest pains, marked abdominal bloating or distension, and lower abdominal pains (in addition to mild and moderate symptoms).

Menstrual dysfunction has been found to correlate with the degree of insulin resistance and the insulin sensitizing agent metformin (the first-line oral medication for the treatment of type 2 diabetes, also used as a treatment of PCOS) has been shown to restore menstrual cyclicity and increases the likelihood of ovulation.

OHSS may be complicated by ovarian torsion, ovarian rupture, thrombophlebitis (a blood clot blocks one or more of veins of leg near the surface) and renal insufficiency (a medical condition of impaired kidney function in which the kidneys fail to adequately filter metabolic wastes from the blood). Symptoms generally resolve in 1 to 2 weeks, but will be more severe and persist longer if pregnancy occurs. This is due to human chorionic gonadotropin (hCG) from the pregnancy acting on the corpus luteum (a temporary endocrine structure in female ovaries that is involved in the production of relatively high levels of progesterone) in the ovaries in sustaining the pregnancy before the placenta has fully developed. Typically, even in severe OHSS with a developing pregnancy, the duration does not exceed the first trimester.

As it stands, there is no perfect strategy which completely eliminates OHSS.

Prevention strategies for OHSS are broadly classified as both primary and secondary in nature. Primary prevention classifies a person based on their risk factors into high, normal, or low risk for OHSS, then individualizing treatment regimens to them on that basis. Secondary prevention, on the other hand, focuses on methods used in patients who have displayed an excessive response to ovarian stimulation during a cycle and aims to prevent progression to OHSS.

The best evidence suggests that the minimum gonadotrophin dose should be used for ovulation induction (OI) given its lower risk of OHSS. This favours a “step-up” regimen over a “step-down” regimen.

There is consensus on the fact that reducing the duration of gonadotrophin exposure reduces the risk of OHSS.

The agent of choice for triggering ovulation should be picked based on the risk of the woman for developing OHSS. No agent, however, completely eliminates the risk of OHSS.

Coasting is a preventative strategy by which gonadotrophins are withdrawn when a certain E2 (estradiol- women’s sex hormone) concentration and/or a critical number of follicles are reached.

During cryopreservation, controlled ovarian stimulation and subsequent oocyte retrieval is performed followed by the cryopreservation of embryos. These are then transferred in a subsequent unstimulated IVF cycle where the woman’s ovarian response to hCG has normalized.

Cycle cancellation and withholding of hCG are the only definite methods of preventing OHSS. However, it must be taken in context with the high financial impact and psychological distress that it causes to women. It is therefore, in many cases, a last resort for clinicians.

Ovarian hyperstimulation syndrome (OHSS) is almost always presents either after human chorionic gonadotropin (hCG) administration or during early pregnancy. Various inflammatory cytokines (a broad and loose category of small proteins that are important in cell signaling), including vascular endothelial growth factor, have been implicated in the pathophysiology of several late pregnancy complications, including preterm labor, pregnancy induced hypertension or preeclampsia (a disorder of pregnancy characterized by high blood pressure and a large amount of protein in the urine) and intra-uterine growth restriction (poor growth of a fetus while in the mother's womb during pregnancy). Since OHSS was also related to a massive increase in systemic inflammatory cytokines that induces a systemic inflammatory response, a common cause/mechanism may attribute to both severe OHSS with vascular hyper-permeability and the aforementioned pregnancy complications.

Future fertility can be threatened in cases of severe complications such as ovarian torsion or ovarian rupture. In cases when the ovary is necrotic (the premature death of cells in living tissue) due to cessation of blood supply, this ovary needs to be removed.

In very rare occasions, this complication is billateral (on both sides). This leads to infertility and women needs to undergo an egg donation.

Severe OHSS, complicated by third space fluid sequestration necessitating drainage, is not associated with adverse late pregnancy outcome (i.e. intrauterine growth restriction and pregnancy induced hypertension/preeclampsia), except for preterm labor. Following resolution of the OHSS, pregnancies should be regarded as any pregnancy resulting from IVF treatment, with special attention to identify and treat preterm birth. Further large prospective studies are required in order to determine whether severe OHSS complicated with third space fluid sequestration, is associated with late pregnancy complications or whether there are preexisting factors predisposing women to develop both OHSS and various pregnancy complications. 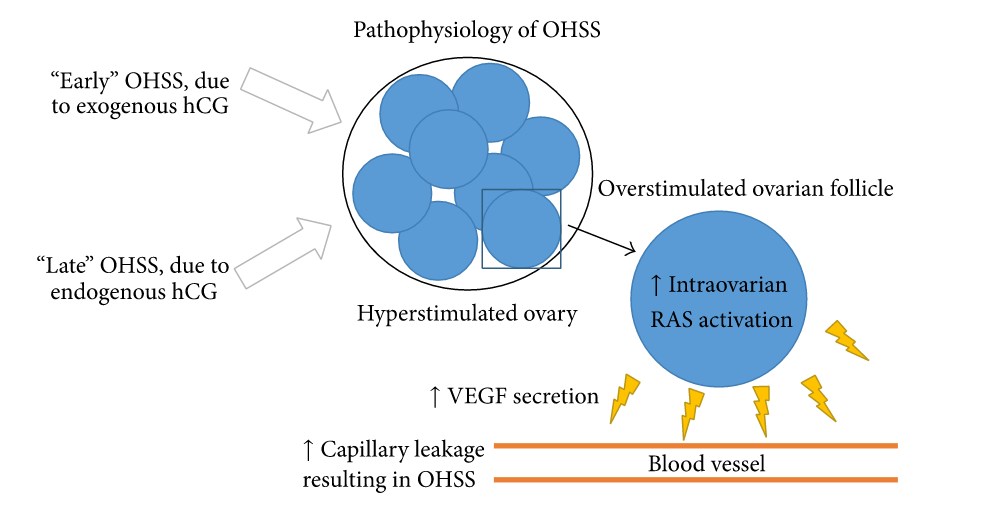 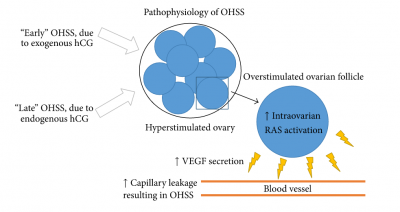 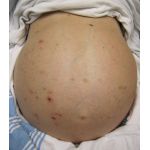